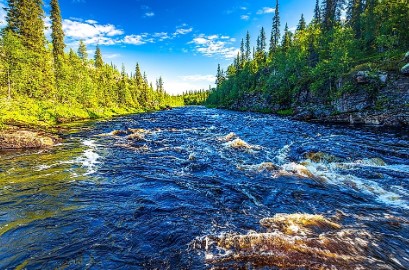 The Israelites experienced forty years of wilderness wandering because of unbelief. They allowed themselves to be influenced not by the word of the LORD but by what they heard from their peers. How many of us make that same mistake today? “Search the land of Canaan, which I [the LORD] give unto the children of Israel” (Numbers 13:2, KJV). The Word was not “which I *will* give” but rather “which I give.” That they had the land was already a done deal, and all they had to do from this point on was to follow the LORD’s instructions.

To walk in God’s promises and assurances requires us to see things and situations from His perspective. His track record is such that nothing that He has ordained has failed to come to pass. Six times in Genesis 1, we read, “And God said … and it was so.” From our perspective, it does not always look like things make a lot of sense, and when we look around at what God says is ours, we are often filled with doubt. However, there are times when we receive a word from the LORD that others do not always understand, but as long as that Word is consistent with what God has revealed of Himself, the child of God can stand with conviction on it. It is interesting to note that when some of the spies saw the land filled with giants, they immediately saw themselves not as the LORD’s children doing what He had instructed but reported, “we were in our own sight as grasshoppers, and so we were in their sight (vv. Numbers 13:32b-33). Their inability to see themselves as the LORD saw them defined who they were, and they presumed others saw them as they saw themselves.

If God says you’re strong, then you are. If He declares you an overcomer, you are. If He says you can and that you will, you can and you will. Whatever He says of you, that is what and who you are. The issue is not so much what others say or believe about you, or even what you believe about yourself, or the different challenging situations you find yourself in. The challenge to every believer is this: what and whose report are you going to believe? The Israelites chose to believe the bad report, and by doing so, they angered the LORD.

What does the LORD say of Himself? In Isaiah 55:8-11 we read, “My thoughts are not your thoughts, neither are your ways my ways, declares the LORD. For as the heavens are higher than the earth, so are my ways higher than your ways and my thoughts than your thoughts. For as the rain and the snow come down from heaven and do not return there but water the earth, making it bring forth and sprout, giving seed to the sower and bread to the eater, so shall my word be that goes out from my mouth; it shall not return to me empty, but it shall accomplish that which I purpose, and shall succeed in the thing for which I sent it” (ESV).

If He says it, we can believe it. Anything else outside of that is irrelevant.