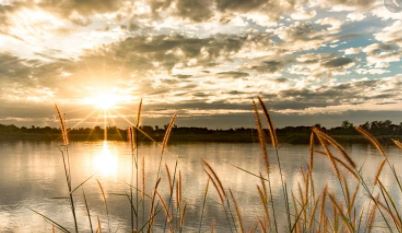 We know the story well.  Five thousand men, beside women and children, all hungry and seated on the grass. There were no shops anywhere in the desert place and even if there were, there was not enough money to feed such a multitude (John 6:7). All they had by way of food was a little boy’s lunch, five loaves and two fishes, but as ​the disciple Andrew​ pointed out, “what are these for so many people?” (v. 9, AMP). They looked at the food, looked at the crowd, immediately saw a problem, and then all eyes turned to Jesus. They were concerned; He was not.  In Matthew’s account of the incident, when the disciples told Jesus all the food they had, He said, “Bring them here to me” (Matthew 14:18).

John tells us, “Then Jesus took the loaves, and when He had given thanks, He distributed them to those who were seated; the same also with the fish, as much as they wanted” (v. 11). If we read that verse too quickly, we will miss some important truths. First, Jesus took into His hands that which was not enough. Second, He gave thanks. Third, He distributed to the disciples who would serve the crowd with everyone receiving as much as they wanted. Though the narrative does not provide any details of their reaction, I believe the disciples were awed by this miracle of addition by subtraction. With every piece of bread that was broken and every piece of fish that was served, there was more to replace them.

As I reflected on Jesus’ actions in this story, I thought about our inability to experience this kind of miracle in our lives, especially in our finances. For some of us, when we look at our monthly obligations compared to our salary, Andrew’s question comes readily to mind.  It just isn’t enough. However, look at what Jesus did with what was not enough.  Before He distributed it to the disciples, He gave thanks. The more I reflected, it occurred to me that in our technological age when our salaries are directly deposited into accounts, we no longer receive physical pay stubs, and we do our payments electronically, it is easy to ignore this important principle.  We have nothing tangible in our hands to give thanks for.  Instead, we try to juggle what we have against our obligations and for most of us, what we have is never enough.

It could very well be that our miracle of addition by subtraction will only be realized when we begin to follow Jesus’ lead. Next payday, mentally take your pay in your hand and give thanks​ for it.  ​Make it a habit to be thankful. ​ Yes, it probably wasn’t enough last time and won’t be enough this time but ​there really is nothing too hard for the LORD. ​ We are encouraged to bring our requests to God with thanksgiving (Philippians ​4:6).  He can cause what is not enough to do more than is needed with some left over. We give Him the little, He gives us the overflow. If He can miraculously multiply bread and fish, He can multiply our finances. Matthew concludes the narrative, “And they all ate and were satisfied. They picked up twelve full baskets of the leftover broken pieces” (14:20). See, He did it before and He can do it again.  He is just that kind of God.