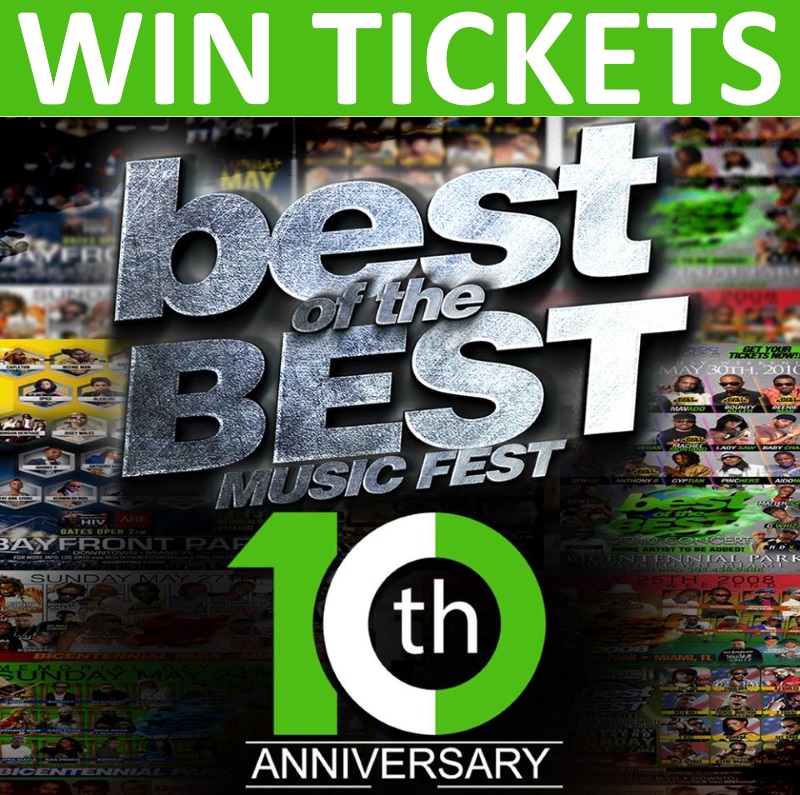 Best of the Best Concert

Win a pair of passes to The Best of The Best Concert on May 29th 2016 (Memorial Day Weekend) in Bayfront Park, Miami. Best of the Best International Music Festival is an event/concert like no other. It is a 10 hour long experience with nothing but the best performances in music such as Pop, R&B, Soca, Reggae, Hip-Hop and Caribbean music. Best of the Best 2016Lineup include: Beenie Man, Capleton, Sanchez, Wayne Wonder, Spice, Morgan Heritage, Admiral Bailey, Tiger, Johnny P., Anthony Malvo and more.

This Contest Has Ended

The “Win 2 Tickets to The Best of The Best Concert ” is sponsored by Best of the Best Concert (“Sponsor”)This contest is governed by these official rules (“Official Rules”). By participating in the contest, each entrant agrees to abide by these Official Rules, including all eligibility requirements, and understands that the results of the contest, as determined by Sponsor and its agents, are final in all respects. The contest is subject to all federal, state and local laws and regulations and is void where prohibited by law.

GIVEAWAY PERIOD
The Giveaway begins at noon EST on April 14, 2016 and ends at May 20, 2016, Midnight EST. (“Giveaway Period”). All entries (submissions) must be received on or before the time stated during that submission period. Sponsor reserves the right to extend or shorten the contest at their sole discretion.

HOW TO ENTER
You can enter on the Giveaway page. Entrants must fill out all required fields and complete the tasks in the contest. After submitting the required information on the entry form, the entrant will receive one (1) entry into the drawing.

WINNER SELECTION
All eligible entries received during the Submission Period will gathered into a database at the end of the Submission Period. A winner will be chosen at random. The winners will be announced on or about May 21, 2016 on or about noon EST. Announcement and instructions for prize will be sent to the e-mail address supplied on the potential prize winner’s entry form. Each entrant is responsible for monitoring his/her e-mail account for prize notification and receipt or other communications related to this sweepstakes. If a potential prize winner cannot be reached by Administrator (or Sponsor) within 24 hours, using the contact information provided at the time of entry, or if the prize is returned as undeliverable, that potential prize winner shall forfeit the prize. If a potential winner fails to comply with these official rules, that potential winner will be disqualified. Prizes may not be awarded if an insufficient number of eligible entries are received.

PRIZES:
Two Tickets to The Best of The Best Concert on May 29th, 2016 in Miami. Terms and conditions may apply. Incidental expenses and all other costs and expenses which are not specifically listed as part of a prize in these Official Rules and which may be associated with the award, acceptance, receipt and use of all or any portion of the awarded prize are solely the responsibility of the respective prize winner. ALL FEDERAL, STATE AND LOCAL TAXES ASSOCIATED WITH THE RECEIPT OR USE OF ANY PRIZE IS SOLELY THE RESPONSIBILITY OF THE WINNER.