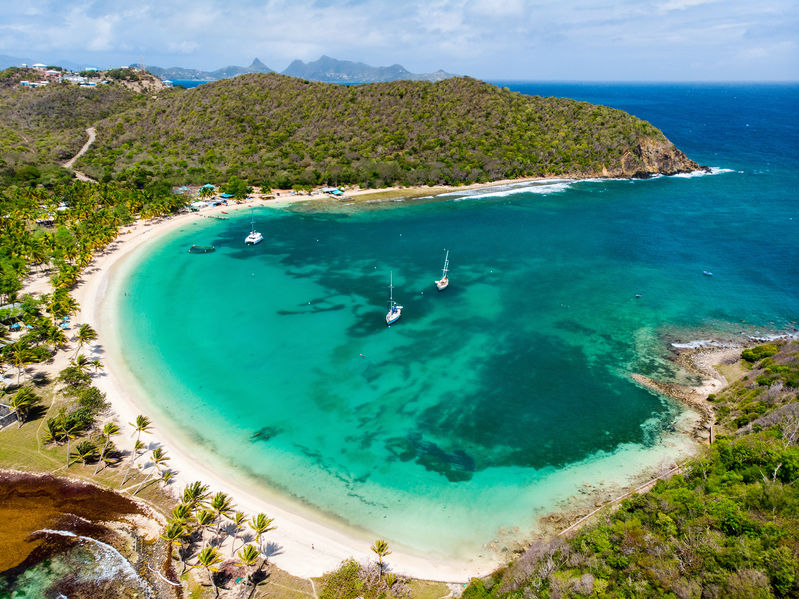 St. Vincent is the main island of the 36 volcanic islands in the Grenadines chain, which extends southward towards Grenada. It features white-sand beaches, bays lined with palm trees, and several luxury resorts. There is excellent diving and snorkeling available here, and the overall environment enjoys less crowding from cruise ship crowds. The capital of St. Vincent is marked by picturesque cobbled streets and colonial-era buildings. Christopher Columbus was the first European to visit the island, which he named after Saint Vincent of Saragossa as he saw it initially on the saint’s feast day of January 22 in 1498. Prior to his arrival, indigenous Carib people called it Youloumain in honor of Youloca, the spirit of rainbows believed to inhabit the island. 10 Attractions to Enjoy on St. Vincent

This popular guided hike takes visitors to the crater of La Soufriere, a volcano that rises 1,234 meters above seas level. This is the highest peak in St. Vincent and is still active. It last erupted in 1979. The hike takes six to eight hours roundtrip on the leeward trail and three to four hours on the windward trail. Hikers can learn about the plants and animals, rain forest, cloud forest, and other sites along the way. They can also explore the crater at the top of the climb.

This fort dates from the British colonial era and is located on a hill that overlooks the Kingstown harbor. The fort is the chief early 19th century fortification on St. Vincent and stands 601 feet above sea level on the island’s leeward side. The views from the fort encompass Kingstown, Young Island, the Caribbean Sea, and the island of Bequia. On clear days it is possible to glimpse Grenada some 90 miles to the south.

4. Vermont Nature Trail
This trail takes hikers through a lush rainforest environment that features a wide array of tropical plants and exotic scenery. Sightings of the St. Vincent Parrot in its natural habitat are especially enjoyable in the St. Vincent Parrot Reserve. Excellent views of cliffs, valleys and its profusion of tropical plants make this trail a must-see for nature lovers.

These gardens were established in 1765 and are the oldest in the West Indies. Covering some 20 acres, the gardens feature indigenous and exotic plants and trees, including hibiscus, cinnamon, nutmeg, mahogany, palms, and a breadfruit tree that was reputedly grown from a seedling brought to the island by the famous Captain Bligh of “Mutiny on the Bounty”. Views of the St. Vincent parrot are provided in the onsite aviary.

This Sea Turtle hatchery was founded in 1995 by Orton “Brother” King, who has been raising turtles from eggs since then in an attempt to increase the survival rates of these animals, who are increasingly endangered. King was inspired to develop the hatchery after being the only survivor of a shipwreck off Martinique. When he washed up on shore, a man who saw him thought he was a turtle. After being saved, King swore that turtles had surrounded him during his time on the open ocean and protected him from sharks. This prompted him to take action to protect the turtles that had saved him.

The falls are located at the foot of La Soufrière Volcano and drop from a tributary of the Richmond River, one above the other, down a high cliff and form a deep natural pool at the bottom. The trail to the falls goes through a bamboo grove and then crosses a natural bamboo bridge. A great adventure hike, and the pools offer good opportunities for cooling swims.

Located near the village of Owia on the northeastern coast of the island. The area is the home of the Black Caribs, the indigenous people of St. Vincent. The pond was created by lava from the Soufriere volcano as it cooled when reaching the sea. The pond refills from waves that splash over the rocks. It is popular with tourists as a swimming site due to its warm salt water, which is thought to have health benefits. The pond is surrounded by well-kept grounds that feature a gazebo, fire pits, showers, tables and benches.

This fort is located on top of a volcanic rock off the shore of Villa. An eerie fort built to defend the town of Calliaqua. It offers 360-degree views of the island’s southern shore. A spiral staircase comprising 225 steps has been carved into the rock leading to the fort, which sits 200 feet above see level. The site also includes two batteries of cannon and a picnic area. It can be access only by boat.

A perfect place for families it is smaller than the Botanical Gardens in Kingstown. Montreal Gardens feature many species of exotic plants.