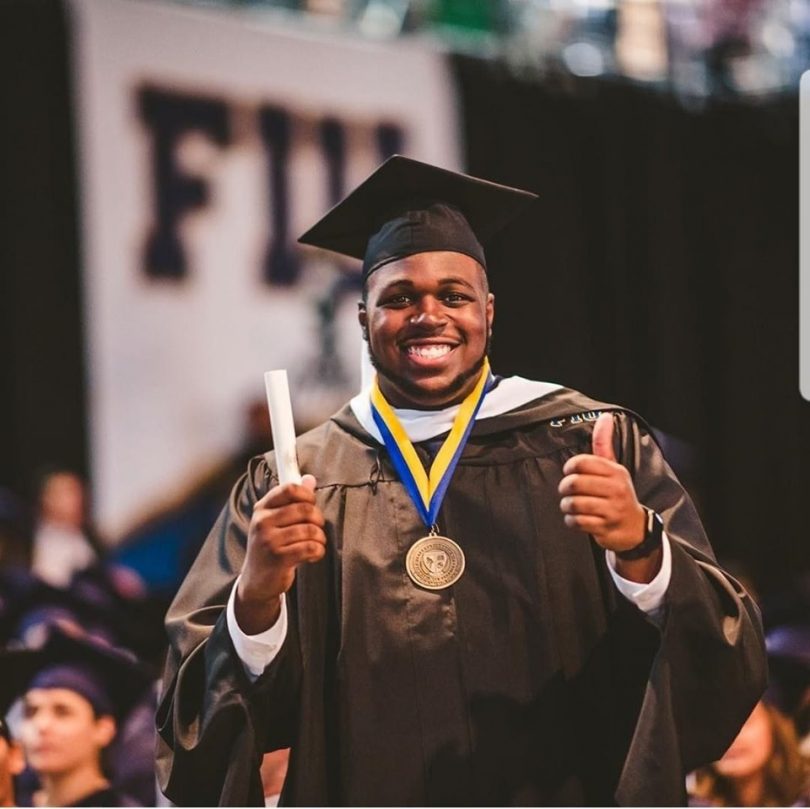 Jamaican, Lajhon Campbell received his Master of Science in Geosciences at the School of Environment, Arts and Society, College of Arts, Sciences & Education at Florida International University (FSI) and was singled out at the graduation ceremony from the stage for his outstanding achievements in the face of considerable challenges.

Campbell grew up in Jamaica and always loved math and physics. He had a dream of becoming a scientist like the famed astrophysicist Neal deGrasse Tyson. But he shared his dream with a high school teacher, she told him that this goal was beyond his reach and that it would not be possible for him to achieve. However, while that would have discouraged many people, it only made Campbell’s motivation and commitment stronger, and now his determination has paid off as, at age 21, he earned both Bachelor and Master’s degrees in just three years at FIU and is now going on to pursue a doctorate in his chosen field.

Campbell’s path to success was not without challenges, however. In 2015, his mother became seriously ill, and he moved from Jamaica to Miami, Florida, to take care of her. He also enrolled at FIU at that difficult time, but he remained motivated to succeed and make his family proud of him. He received guidance from geophysicist Shimon Wdowinski and pursued a project in which he used GPS to calculate the movements of the earth with the goal of improving the predictability of earthquakes. Campbell looked for patterns that might be used to predict the location and time of future earthquakes. This research has major life-saving implications as warnings and alerts could be given earlier and more accurately to affected populations living in areas prone to earthquake activity. Campbell has presented his research at national and international conferences as a McNair Scholar.

Campbell is ready to join the geophysics field, a discipline in which less than one percent of geophysicists in the United States who have doctoral degrees are black. Having graduated from FIU, he will move on to pursue a Ph.D. in geophysics at Stony Brook University where he hopes to again challenge conventional ideas of what is possible.