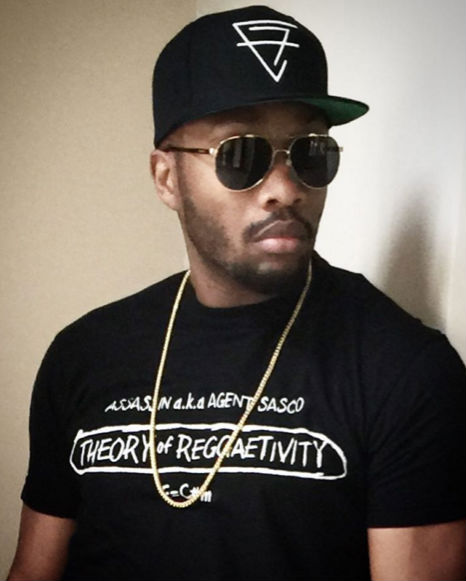 In the absence of artists like Buju Banton and Terror Fabulous, Reggae music has been left with a vacuum in regards to the rough voiced sound of the streets backed by culturally conscious lyrics and the distinct drum and bass heavy, low temple rumble that only real reggae provides. In recent years, Busy Signal touched the genre leaving an indelible impression with Reggae Music Again but even that was adjacent to filling the void that has lingered over a lengthy period. Enter Theory of Reggaetivity

This album is unique in that it approaches the genre in candid fashion without being campy or corny. Assassin aka Agent Sasco being a product of Dancehall, the more commercially recognized and largely party-based sub genre much akin to Hip-Hop and Pop music, would to the undiscerning seem to be a lesser likely candidate fill this role. He’s not a Rasta nor does he elude to it being a future endeavor of his to convert. He tends to be one of the more family oriented Dancehall artists(which may be a contradiction in terms) who seldom resorts to profanity which is in stark contrast to many of his comrades. That not withstanding, Sasco also seems to carry less of the distain for western society that your average cultural reggae artist lugs around. This is not to say that he’s a soft cookie by any means, he’s provided some of the hardest dancehall anthems to hit sound systems like “Ruffest And Tuffest” on the Diwali Riddim and “Shell” which was produced by the late Roach on the Afterlife Riddim ironically around a year before his untimely death.

What Assassin does have in abundance is character. The lyrically top tier Toaster who was featured on critically acclaimed albums from Kanye West and Kendrick Lamar respectively(his vocals were featured on Kendrick’s widely praised 2016 Grammy performance) has been refined by time and his maturity is evident in his seasoned delivery and choice of topics. While possessing one of the strongest commands of vocabulary in the genre, Assassin seems to repeatedly find new ways to elaborate on the thoughts and feelings of the everyday man on the street.

The title track which doubles as the intro takes a college thesis like approach to bringing the listener to a mind state in which Reggae is a measurable force of nature and even an essential piece in the process of creation. “Reggae Origin” hearkens back to the unearthing of the sound around giving the impression that reggae existed before it’s architects being more discovered than created. “Health And Wealth” will likely be my next ringtone. It’s a rockers track aimed at giving thanks for the blessings of a healthy body and the strength to carry on through life’s journey. Other stand out tracks include the previously released single “Day In Day Out”, “No Slave” which features current genre favorite Chronixx and motherland anthem which could be used as the official continental tourism theme, “Africa” which aims to dispel negative views of the birthplace of man kind and replace them with a picturesque musical greeting card.

Assassin sets out to contribute to something greater than himself with this album. The result of his resolve is a triumph for not just himself or even the genre, but for the modern tapestry that is todays music. In an instagram world of substance is seldom a top priority and going against the grain results in ridicule instead of celebration, it’s good to see that purposeful non-conformity can still attract people with the highest level of talent. The fact that this album emerges so triumphantly from a sea of same old same old is proof that the theory is worthy of further study.