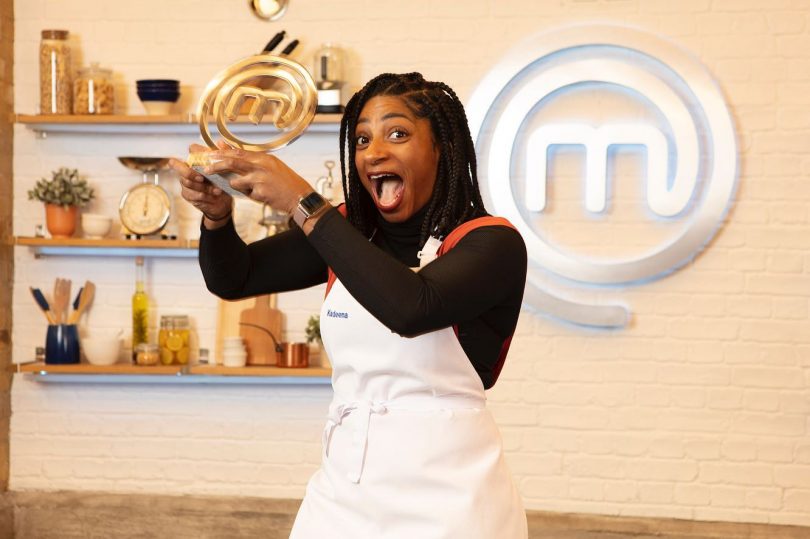 Kadeena Cox, a gold-medal-winning Paralympic sprinter and MBE, received the title of Celebrity Masterchef on BBC One’s Celebrity MasterChef 2021 program in the United Kingdom on September 17, 2021. She defeated 19 rivals overall and bested Joe Swash and Megan McKenna in the finals, taking home the trophy with her caviar, goat, and chocolate feast.

Upon winning Celebrity Chef, Cox posted to Twitter, “I can’t believe it! What an experience it was on @MasterChefUK so grateful to have had the opportunity to be on this series! Loved every second with the rest of the finalists and special shout-out to @GreggAWallace and @JohnTorode1 #CelebrityMasterChef.”

Cox, 30, has multiple sclerosis, but as John Torode, one of the judges said, “So many times during this year’s competition I forgot Kadeena had Multiple Sclerosis and was not only battling for the trophy but had her own personal battle going on. She just never let up, she didn’t stop!” He described her as a “true inspiration” and her foods as special, technically brilliant, and packed with heart. “It’s got soul and it’s got love,” he added.

Kadeena Cox was born in Leeds, West Yorkshire, England, in 1991. Her parents are Jamaican immigrants. She attended Bracken Edge Primary in Chapeltown, Leeds, and Wetherby High School prior to entering Manchester Metropolitan University to study physiotherapy. She began her sprint career when she was 15 years old on the recommendation of her hockey coach. She started out competing in regional Under-17 meets in the 100 meters, adding the 60 meters and 200 meters in 2007 and took bronze medals in both events at the Manchester Open and England Athletics Open Championships. She continued to compete, and in 2013, broke the 12-second barrier in the 100-meter event for the first time. Before becoming ill, Cox was in the running for a place on the British skeleton team.

In 2014, after entering the Loughborough International, she was hospitalized as she was displaying odd symptoms and was diagnosed as having had a stroke. She recovered her health after two months of physiotherapy and became to train again. Later in 2014, she felt a burning in her right arm, followed by numbness to the arm and right leg, and was hospitalized again with the initial diagnosis of another stroke. After being tested extensively, she was told she had multiple sclerosis. She did not allow the diagnosis to end her competitive athletic career, however.

In 2015, she was chosen for Great Britain’s Paralympic athletics team to compete at the IPC Athletics World Championships in Doha, entering the T37 100-meter and 200-meter sprint events. She beat the world record in the heats prior to the final with a time of 13.59 seconds, and later the same day, ran in the final to take the gold medal with a time of 13.60 seconds. She earned a spot at the 2016 Summer Paralympics as a T 37 athlete but was reclassified as a less-disabled contestant (T38), which threatened her hopes to run in Rio. However, despite her reclassification, she was chosen for the Paralympics in $90 and won gold in the T38 400 meters by setting a world record of 1:00.71, silver in the T35-38 4×100-meter relay, and bronze in the T38 100 meters. Cox was then chosen to be the flag-bearer for the British team at the Games’ closing ceremony. Cox also competed in the T38 400-meter event at the delayed Summer Olympics in Tokyo in 2021, finishing fourth with a season’s personal best time of 1:01.16.

Cox also represented Great Britain at the UCI Para-cycling Track World Championships in Montichiari, winning a gold medal in the 500-meters time trial, setting a world record of 37.456 seconds. She defended her time trial title with a gold-medal win at the Tokyo Paralympics in 2021 with a world record time of 34.812 seconds.[

Cox was named a Member of the Order of the British Empire (MBE) in 2017, as well as the title of Sporting Equals Sportswoman of the Year at the Lycamobile British Ethnic Diversity Sports Awards (BEDSAs.

She has made numerous media appearances, competing in various activities, including Celebrity Mastermind in December 2016, Celebrity Robot Wars; the British television winter sports show The Jump; The Great Stand Up to Cancer Bake-Off in 2018; and Celebrity Gogglebox.