Did you Know Jamaica Gave the World the Air Horn You Hear in Today's Music? - Jamaicans.com The sound of a portable air horn can be heard at sports events, concerts, raves, and broadcast media. What was utilized as an audience communication device in Jamaican dancehall music became a staple in hip hop and reggae. The popularization of the air horn can be attributed to New York’s Hot 97 Radio DJ, Luis Diaz, better known as Cipha Sounds.

In the music world, the air horn was used in Jamaica at dancehalls as a way to attract attention and communicate with audiences. The practice is very similar to a form of communication used in West Africa known as call-and-response that was a call to participate in everything from religious and political gatherings to weddings and funerals.

The first use of an air horn in Jamaican music was on the B-side of The Wailers “Ravers Version” in 1972 (In the Youtube video below skip to 3:05 to hear the air horn on a reggae record). As Jamaican music gained in popularity, so did the use of the air horn. Even artists encompassing Kanye West, Pharrell and Beyoncé have employed it. Diaz introduced the air horn to his New York audiences in the 1990s.

What had become a standard feature in Jamaican music and popularized by Diaz soon became an overused affectation by producers and DJs looking to capitalize on the trend. Big corporations jumped on the bandwagon of commercialization, using it to sell everything from pizzas to pharmaceuticals, and the air horn was relegated to the category of annoying noise rather than a celebratory sound.

Air horns have been used for decades on big rigs, ships, trains and emergency vehicles. The portable version popularized by Diaz is now used by lifeguards, as emergency alerts, and a means of self-defense. Hikers and other sports enthusiasts use them to scare away dangerous wildlife and signal rescuers. Air horns can now be found at rallies for political and social issues, along with horns on cars, bicycles, and in numerous videos scare pranks on social media. 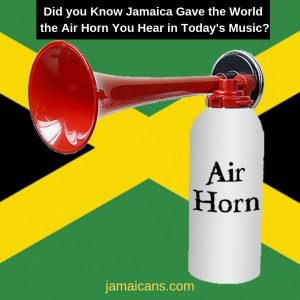