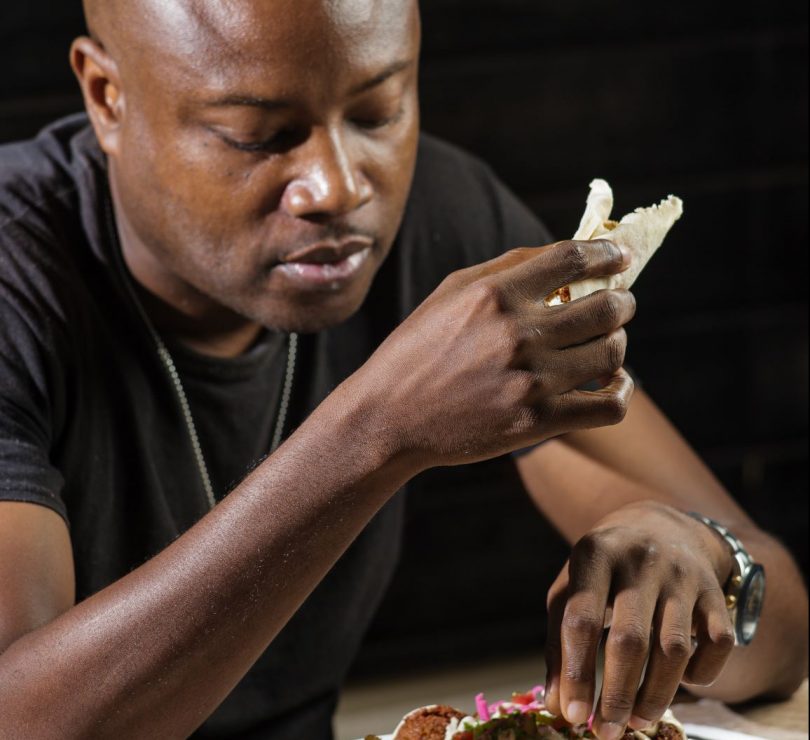 If you’re a jet setter like global DJ Kurt Riley you might be feeling a little claustrophobic. With restricted flights and events canceled or postponed until next year, it’s hard to get your adventure kick. Popularly known as the Party Animal, a nickname he acquired after producing the hit, Party like an Animal, by Charly Black, Kurt became a frequent flyer after leaving his 16-year tenure at Fame Fm.

Between producing and working remotely with New York-based radio station Irie Jam, Kurt has been missing trying new foods from his travels.  Flying to play deejay gigs all over the world from the USA, Europe, South America to other parts of the Caribbean was his norm up until recently.

Most recently, Kurt Riley selected during the night for Verzuz: Jamaica Edition, the clash between Beenie Man and Bounty Killer, a moment in pop culture so incredible, Billboard magazine announced the Jamaican legends as the favourite battle to date after polling.

On working with Verzuz,  “It was great! I normally play for Beenie Man whenever he has a gig so we work well together. I’m honored to have been a part of a great moment in music.” he says humbly.

Kurt likes his food like his music: diverse and a hitmaker!

Kurt likes to sample the local fare of any city he’s in –from street food to fine cuisine and isn’t afraid to try new dishes that will throw a party for his taste buds.

He admitted he hasn’t been to Lebanon so where else than Kingston-based restaurant Chez Maria to get all the authentic flavours?

Chez Maria is a family-owned restaurant and has been around for 16 years. The owners, originally from Lebanon, located in West Asia bordered by Syria, came to Jamaica over a decade ago and made it their home. They pride themselves on supporting local farmers to bring the freshest ingredients to their authentic dishes.

Usually juggling his time between his studio sessions at Jambian Studios, Kurt took a break and visited Chez Maria a few weeks ago at 80 LMR in Kingston Jamaica for lunch.

“Music is like food. I play music for a diverse audience – from street sessions to large carnivals and private functions for diplomats – all different musical tastes. Trying new foods inspires me and takes me to that place.” he says.

He wanted to try something quick and fast, a simple lunch meal that he could savour in between studio sessions. The first flight was their classic shish tawook combo wrap, served with fries and a small portion of salad topped with pita chips. A real value meal, this combo is just for $1000 and is only available at the restaurant until October 31st, 2020. 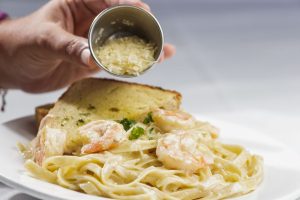 The second flight was a trip to Italy and is one of Chez Maria’s most popular dishes, their shrimp alfredo pasta. Usually served, with large portions, in a creamy, homemade white sauce tossed with sautéed shrimp and sprinkled with fresh parmesan cheese. They are known for their pasta dishes which include everything from spaghetti bolognese to penne al fuoco.

After having a little chat with Nancy Hado, one of the owners, he admits he’s tried different types of food but vegetarian cuisine is his least favourite. 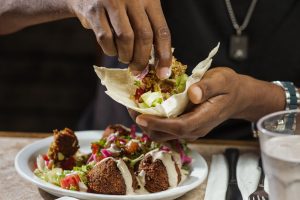 Kurt holds the falafel wrap, served with fresh veggies, homemade cucumber pickles, and turnips along with a fresh tahini sauce for the last flight.

She brings out the falafel platter served with fresh veggies, homemade cucumber pickles, and turnips along with a fresh tahini sauce for the last flight.

“Is this vegetarian? This isn’t vegetarian!” Kurt asks in disbelief. He asks twice because it’s so flavourful.

They both laugh, Nancy confirms it’s vegetarian and they start talking about the different musical genres they have on their playlist. From EDM to authentic Lebanese music, Kurt is always interested in hearing new sounds that will help him create hit records.

Take a trip to Italy and Lebanon. Visit Chez Maria at 80MLR in Kingston, Jamaica, and try something new.