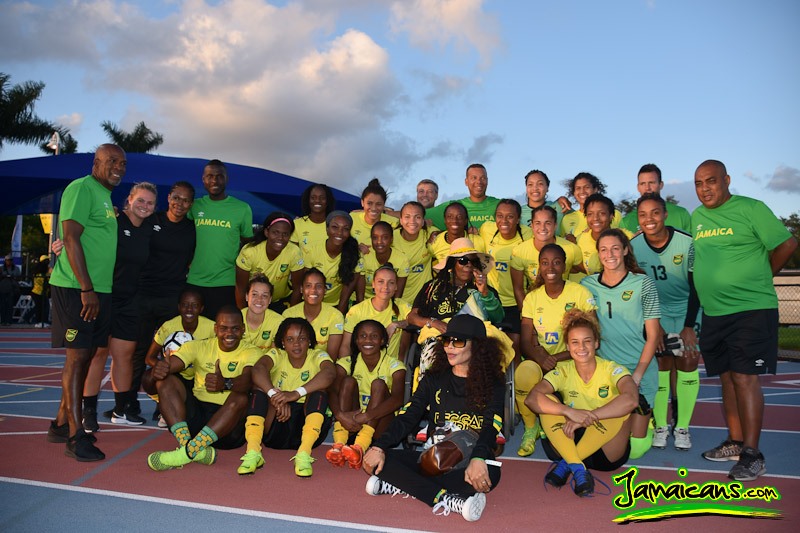 Cedella Marley, Bob Marley’s daughter, was unaware of the existence of Jamaica’s women’s national football team, the Reggae Girlz, until her son showed her a flyer from his football coach that said the women’s team needed help. That was in 2014 and was the spark that resulted in one of the most inspiring periods in the history of Jamaican football.

Cedella Marley, the eldest of Bob Marley’s children with his wife Rita, remembers asking about the Reggae Girlz and discovering that many people were unaware of the team, let alone its potential. It was not surprising that few people had heard of the team as it had been cancelled by the Jamaica Football Federation (JFF) in 2010 when the organization stopped funding women’s programs. This meant the team could not compete in qualifying matches for 2011 Women’s World Cup, and it was not provided with a ranking from FIFA.

However, things changed due in part to Jamaica’s most famous family, the Marleys. With the support of Cedella Marley and the family, the Reggae Girlz have moved from being almost extinct to qualifying for the most prestigious football playing field in the world. In June 2019, the Reggae Girlz will become the first Caribbean team to play at the Women’s World Cup in France.

Cedella Marley, the CEO of the family’s Tuff Gong group of firms, approached the HFF to offer her help once she heard of the team’s problems. She was named a team ambassador and took action to raise both awareness and funding to the Reggae Girlz. The song “Strike Hard” was recorded with Stephen and Damian Marley, her brothers, to support the team. They also launched a crowdfunding campaign that raised over US$50,000 for the 2015 Women’s World Cup qualifying camping.

Cedella Marley also reached out to the team’s head coach Hue Menzies to offer her help. Menzies was raised in Jamaica before moving to the United States at the age of 16. He said that his role with the team is as a “volunteer” and that he does not receive pay beyond daily expenses, but even with its volunteer coach, the Reggae Girlz required funds in order to qualify for the 2019 Women’s World Cup. Marley found it difficult to obtain sponsors at first. Her biggest challenge, she says, was overcoming the idea that football was “inappropriate” for girls. She persisted, however, and ultimately found a sponsor in the Alacran Foundation, which was ready to partner with the Marley Foundation to support Jamaica’s national women’s team.

Now that the Reggae Girlz have qualified to compete for the World Cup, they are ranked 53rd in the world and will be the lowest-ranked competitors at the tournament in France. The team’s performance since qualifying has been excellent, and the Girlz are confident about their ability to perform well on the world stage. According to Menzies, “We’re there, and we’re not just there to show up.”

Whatever the outcome for the Reggae Girlz in France, Cedella Marley calls the team’s representation of Jamaica and the Caribbean at the Women’s World Cup “a triumph” that would have made her father proud. She noted that her mother Rita is the team’s biggest fan and that she was told from the start that her father Bob would have supported her efforts with the team because he believed that every man and woman has a right to pursue his or her dreams.