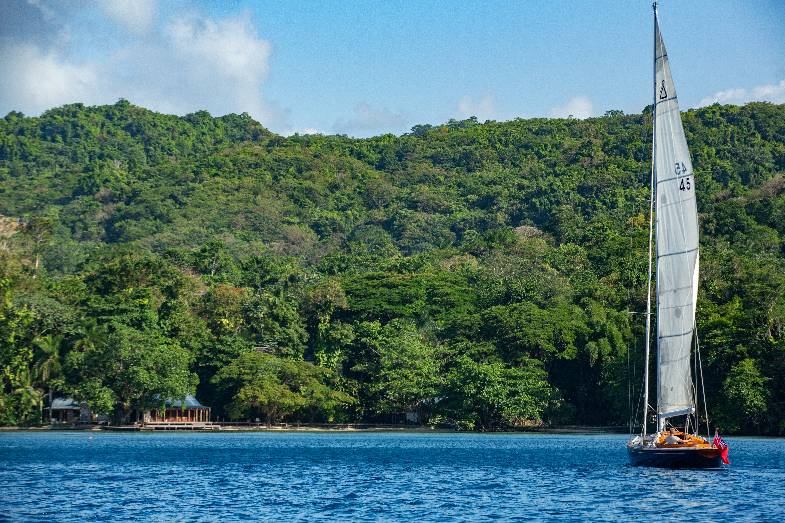 To celebrate the release of the latest James Bond film, the Jamaica Tourist Board has released behind the scenes footage of No Time To Die. The footage showcases cast and crew as well as some of the locations shot in Jamaica.

Jamaica is the birthplace of 007, where Ian Fleming created and wrote the Bond novels. The island also features in the first James Bond film, Dr. No (1962), as well as in Live And Let Die (1973).

Jamaica is a key location in No Time To Die where Bond has left active service and is enjoying a tranquil life on the island. His peace is short-lived when his old friend, Felix Leiter, from the CIA turns up asking for
help.

The Jamaica Tourist Board is delighted to play such a significant role in the 25th James Bond film. Hon Edmund Bartlett, Minister of Tourism for Jamaica, said, ‘Bond for us means we are a place for beginnings, but we are also a place for great endings’. And Hon Olivia Grange, Jamaica’s Minister of Culture, Gender, Entertainment and Sport, comments, ‘It’s really something we have dreamt about and we are happy that it’s going to be a reality.’

Jamaica is famed for its majestic verdant hills, white sand beaches, and turquoise waters. Whether it’s relaxing on Laughing Waters Beach, where Honey Ryder famously emerged from the water in Dr. No, or touring the lesser-known locations from the novels and films, Jamaica will captivate holidaymakers looking to follow in the footsteps of James Bond. Take a refreshing swim at world-renowned beaches, be amazed by the tallest waterfalls, sway to the pulsating beat of reggae music, savor the spices of jerk cuisine, and seduce the senses with the
finest rum.

No Time To Die will be released internationally in cinemas from September 30 2021 through Universal Pictures International and in the U.S. on October 8 from Metro Goldwyn-Mayer (MGM) via their United Artist
Releasing banner.

Last year, the JTB was declared the Caribbean’s Leading Tourist Board by the World Travel Awards (WTA) for the thirteenth consecutive year and Jamaica was named the Caribbean’s Leading Destination for the fifteenth consecutive year as well as the Caribbean’s Best Spa Destination and the Caribbean’s Best MICE Destination. As well, Jamaica copped the WTA’s World’s Leading Wedding Destination, the World’s Leading Cruise Destination and the World’s Leading Family Destination. Additionally, Jamaica was awarded three gold 2020 Travvy Awards for Best Culinary Destination, Caribbean/ Bahamas; Best Tourism Board Overall and Best Tourism Board, Caribbean/ Bahamas. The Pacific Area Travel Writers Association (PATWA) named Jamaica the 2020 Destination of the Year for Sustainable Tourism. In 2019, TripAdvisor® ranked Jamaica as the #1 Caribbean Destination and #14 Best Destination in the World. Jamaica is home to some of the world’s best accommodations, attractions and service providers that continue to receive prominent global recognition. For details on upcoming special events, attractions and accommodations in Jamaica go to the JTB’s Web site at www.visitjamaica.com or call the Jamaica Tourist Board at +44 207 225 9090. Follow the JTB on Facebook, Twitter, Instagram, Pinterest and YouTube. View the JTB blog at www.islandbuzzjamaica.com.

ABOUT NO TIME TO DIE:
No Time To Die is the official title of the 25th James Bond adventure. The film — from Albert R. Broccoli’s EON
Productions and Metro Goldwyn Mayer Studios (MGM) — is directed by Cary Joji Fukunaga and stars Daniel Craig, who returns for his fifth film as Ian Fleming’s James Bond 007.

Written by Neal Purvis & Robert Wade (Spectre,Skyfall), Cary Joji Fukunaga, and Phoebe Waller- Bridge (Killing Eve, Fleabag), the film will be released globally from September 30 2021 through Universal Pictures International and on October 8 in the US through MGM via their United Artists Releasing banner.

In No Time To Die, Bond has left active service and is enjoying a tranquil life in Jamaica. His peace is short-lived
when his old friend Felix Leiter from the CIA turns up asking for help. The mission to rescue a kidnapped scientist turns out to be far more treacherous than expected, leading Bond onto the trail of a mysterious villain armed with
dangerous new technology.

About MGM:
Metro Goldwyn Mayer (MGM) is a leading entertainment company focused on the production and global
distribution of film and television content across all platforms. The company owns one of the world’s deepest libraries of premium film and television content as well as the premium pay television network EPIX, which is available throughout the U.S. via cable, satellite, telco, and digital distributors. In addition, MGM has investments in numerous other television channels, digital platforms, interactive ventures, and is producing premium short-form content for distribution. For more information, visit www.mgm.com.