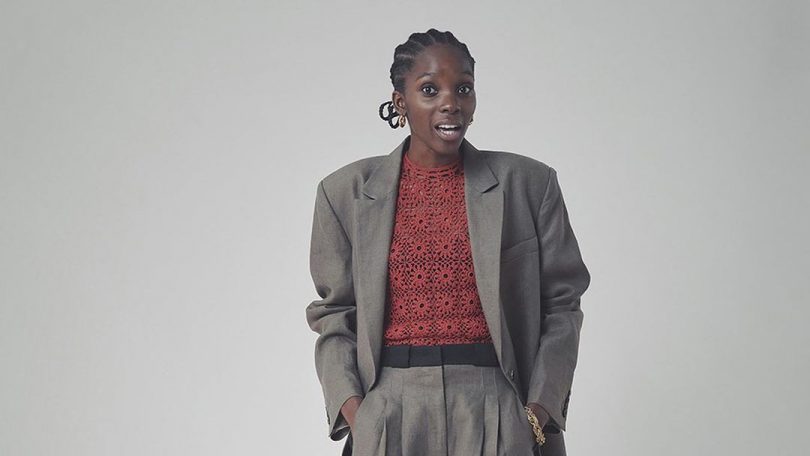 Jamaican-born designer Rachel Scott, 37, has debuted a new fashion line that draws inspiration from Jamaica and dancehall culture. With the launch of Diotima, a line of ready-to-wear products that has been taking shape for the designer for years, Scott found a way to connect with her homeland during the COVID-19 lockdown. Diotima, which is named for an ancient Greek priestess who is credited with inventing the Socratic method, has a focus on artisanal techniques and processes.

As a teenager growing up in Kingston in the 1990s, Scott became aware of the tensions arising between the decorum mandated by her Jesuit high school and the liberation coming from the dancehall scene she participated in at nigh. Scott said “it was ridiculous” that there was the idea of being “proper” and having to present herself in a certain way in the daytime and the feelings of freedom she drew from watching local dancehall artists like Lady Saw, Shabba Ranks, and Chaka Demus & Pliers at parties. “Dancehall will forever be influential to me,” Scott said of the musical genre. Dancehall has its roots in the African diaspora and for her, “It’s like this explosion of exuberance.”

Prior to launching her dancehall-inspired Diotima line, Scott had been establishing relationships with “incredible people who have important knowledge” for some time, and she wanted to include “an opportunity for more of a collaborative element.” While the middle of the COVID-19 pandemic may have been an odd time to launch a new endeavor, she felt it was the right moment to do so.

The debut collection’s centerpiece is a spider-web top that was handmade by Jamaican artisans using a traditional technique used to make doilies. The same technique was used to make a trim on a silk organza dress and midi skirt.

Scott noted that much of the process involved thinking about things that could be done by hand from home. Women were doing the crochet work in Jamaica, while Scott decided to pursue macrame, cutting strips at the bottom of a printed jersey tee shirt and knotting them together with glass beads to create a modern rendition of a do-it-yourself beach cover-up.