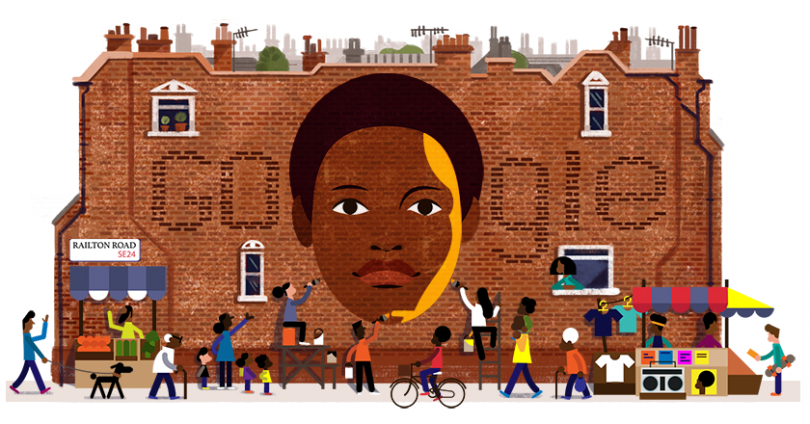 The community leader and activist Olive Morris was honored on June 26, 2020, with a Google Doodle to commemorate the 68th anniversary of her birth in St. Catherine, Jamaica, in 1943. Morris moved to Brixton in the United Kingdom from Jamaica to join her parents who had migrated to the UK as part of the Windrush generation. She lived most of her life in South London and attended Heathbrook Primary School, Lavender Hill Girls’ Secondary School, and Tulse Hill Secondary School. She studied at the London College of Printing later.

In 1969, defending the Nigerian diplomat Clement Comwalk who was being beaten by police as he sat in his Mercedes outside a record shop in Brixton, Morris herself was attacked and seriously beaten by police. She was arrested and fined on charges of assault on the police, threatening behavior, and possession of dangerous weapons, and then received a suspended sentence. In the 1970s, she joined the youth section of the British Black Panther Movement. In 1974, she co-founded the Brixton Black Women’s Group, which was organized to raise consciousness among women and encourage them to communicate with each other about their daily life experiences. She was also a co-founder of the Organization of Women of African and Asian Descent in London and Manchester. This group, along with the Brixton Black Women’s Group, was the first organization for black women in the UK.

Morris also took part in activities like squatting in buildings to create self-help places in communities. This included a squat at 121 Railton Road in Brixton, which was the site of one of the first black community bookshops and a center of political activism that hosted community groups like Black People against State Harassment. The site ultimately became an anarchist project called 121 Centre that existed until 1999. Also, during the 1970s, she worked with Leila Hassan on Race Today’s “Basement Sessions,” which featured discussions of art, culture and politics.

In 1986, the Lambeth Council named a building in her honor after the Brixton riot of 1985 that was sparked by the shooting of Cherry Groce by police. While some saw the naming as an attempt by the Council to placate the black community, others believed it represented the Council’s commitment to reconciliation. A play area and garden in Myatt’s Fields were also named in honor of Morris. A depiction of the activist is shown on the Brixton 1-pound note, a local currency. In 2017, the Remembering Olive Collective was established, and in 2019, the collective, renamed for African-American scholar Tanisha C. Ford who was an early member, worked to ensure Morris would be remembered even when the building housing the group was demolished. In 2011, the Olive Morris Memorial Award was created to provide bursaries for young black women, and in 2017, a large mural entitled “Say It Loud” was painted in Blenheim Gardens in Brixton, in part to honor Morris. In 2018, to celebrate the 100th anniversary of most women in the UK gaining the right to vote, Olive Morris was listed by The Voice newspaper as one of the eight black women who contributed to the development of Britain. The Evening Standard listed her as one of the 14 “inspirational black British women throughout history” as well.

The Google Doodle honoring Morris was created by artist Linett Kamala, who has a second home in Brixton and who curated an online exhibit of Olive Morris for the Black Cultural Archives. In creating the Doodle, Linett said she wanted to capture the energy of Morris’s activism.  She added that she attempted to make the exhibition accessible by narrating the text and that as a person who also has Jamaican heritage, she is proud of the contributions made by Morris.