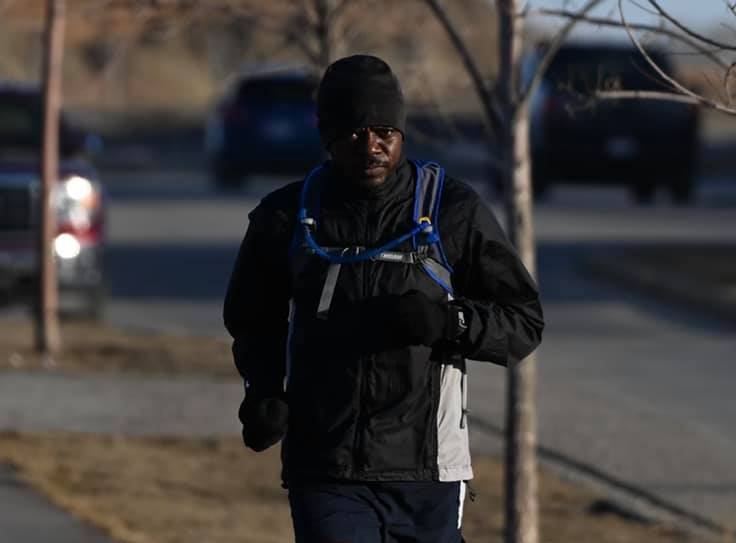 Jamaican Canadian Varden Morris, 50, won the Great Virtual Race Across Tennessee (GVRAT), completed the 1,000k race – some 621 miles – in a record-breaking nine days and 23 hours. When the 2021 GVRAT began on May 1, Morris’s goal was not only to win but to finish the race in under 10 days. His race plan was to run as close as he could to the same average distance each day, going a little above his average of the first day by 10 percent. His training routine was to run for six hours around his neighborhood in Calgary, then resting for five hours. He rotated wearing three pairs of Asics shoes, and in his diet, he focused on foods like Jamaican sweet potato pudding, the Jamaica pastry called “toto,” and fruits including grapes, bananas, oranges, and watermelon.

Morris took first place by clocking an average of over 100k per day, defeating his fellow Canadian competitors Matthew Shepard, 33, and Crissy Parsons, 40, who finished the race in 13 days and 15 days, respectively. Morris told Runner’s World that he was “in disbelief,” citing posts on social media expressing the importance of what he had accomplished.

In April of 2020, Gary “Lazarus Lake” Cantrell, the creator of Barkley Marathons, decided to host a virtual ultra to give people a four-month period to run twice the distance of the Last Vol State 500k. Over 19,000 runners signed on to the project, one of them being Morris, who started with the fastest runners but fell victim to injuries resulting from a lack of training that slowed him down. He finished in 148th place overall, but his loss inspired him to make the effort to win the race in 2021.

Morris began his preparation for the 2021 race by studying the training methods of successful ultra runners. By the beginning of the year, he ran 14 miles per day for a week, then increased his mileage by four miles to the daily total until he reached a maximum of 36 miles per day. In March 2021, he covered 965 miles.

While each day of the GVRAT was difficult, and although Morris was in pain during his final 44 miles, he knew he was running ahead of his Canadian rivals. His wife, who was his crew chief, joined him in running the first 15 miles of the final push, and his daughter ran the final four miles with him. Morris and his crew celebrated his win with a big meal of meat, vegetables, and non-alcoholic wine at his home.

Now that Morris holds the GVRAT record, he plans to run back across Tennessee, as part of the race format permits runners to run back across the state as many times as they wish during the four-month period. Morris said he will be running much slower, however.