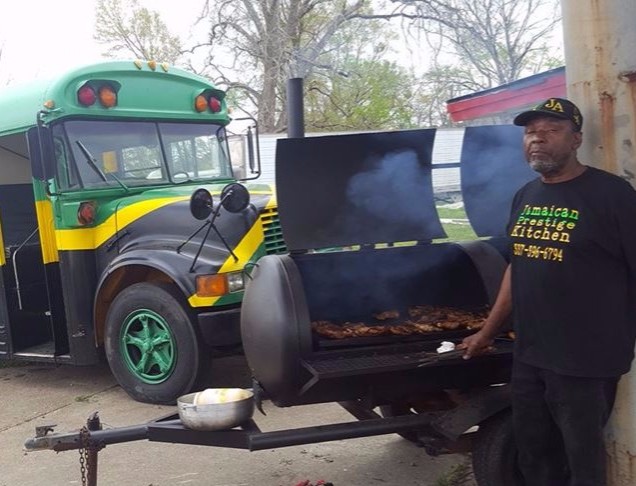 The Leesville Daily Leader newspaper in Louisiana ran a feature on the Jamaican Prestige Mobile Kitchen, which opened for business in March 2017, and is serving home-style island food to the citizens of Louisiana’s Vernon and Beauregard parishes.

Thomas Anderson, the owner of the food truck, moved to the area from New York and saw there were no Jamaican food restaurants. To remedy this situation, he purchased a bus and transformed it into a mobile kitchen so he could share the flavors of his home island. Born and raised in Ocho Rios, Anderson spent most of his life on Jamaica’s north coast where he fostered his love of cooking. It’s always been a part of his life, he says, “My passion is cooking.”

He says that anyone who likes Cajun food will enjoy his Jamaican dishes, which feature big, robust flavors and spicy seasonings. He acknowledges that Jamaica food is different from any other kind of food as it is made with more spices and seasonings that really give it “taste.”

Anderson’s Jamaican Prestige offers jerk chicken and pork, curried chicken, and sides of rice and peas, white rice, potato salad, steamed cabbage, and corn-on-the-cob. Occasionally, the mobile kitchen serves up Jamaican treats like curried goat and oxtails, as well as sandwiches. Particularly popular with diners is the way Anderson prepares his steamed cabbage, which is seasoned “spicy and nice.”

The bus, which Anderson designed himself and was a significant challenge in starting the business. Another challenge is finding business because the food is always on the move. He had a sign, but it was stolen, and so he has trouble getting more business. “I need to make a bigger one,” he says.

Diners looking for the current location of the Jamaican Prestige Mobile Kitchen can visit its page on Facebook.