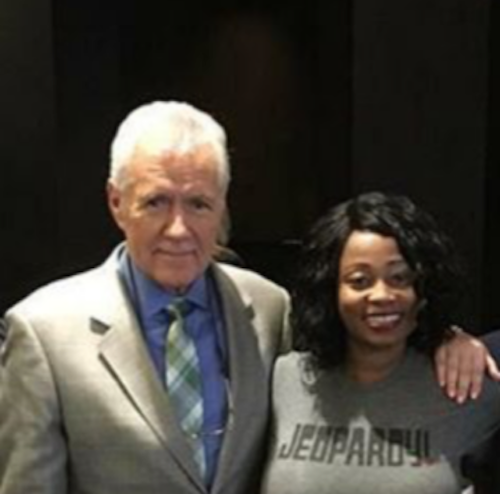 Terry Gayle, a Jamaican who worked with Alex Trebek on the long-running TV game show “Jeopardy” as an audience coordinator, says she was devastated when Trebek gathered his crew together to inform them that he had been diagnosed with Stage 4 pancreatic cancer in 2019 and that he had every intention of beating the disease. He told the staff the sad news before he announced it publicly on the program.

Gayle, who was born and raised in Leeds, St. Elizabeth, migrated to the United States in 2001 and has worked in television and film for 15 years. She served as the Audience Coordinator for Trebek on “Jeopardy” for over six years, and in 2018, won an Emmy award for her work on the show. Trebek received a total of seven Emmys for “Jeopardy.” Gayle said the TV host was the best boss she ever had. She resigned just six months after the announcement of his diagnosis. On the day he told the staff about his diagnosis, she had to make an effort to hold herself together and remain professional in her role as Audience Coordinator because she was the first person the 130 members of the audience would see. The months following Trebek’s revelation were very hard for Gayle. People from all over the world tried to sneak into the show, bringing various remedies and ideas about treatments. “It was very stressful,” she said.

Gayle described Trebek, who died on November 8, 2020, after fighting the disease for two years, as a decent human being who had integrity and character. He looked out for his staff, she added, and took care of them financially, especially for at Christmas when the staff received substantial bonuses.

Before migrating to the US, Gayle worked in customer service at Alpart in St. Elizabeth and at a call center in the Montego Bay Free Zone. After arriving in the US, she decided to pursue theater arts in order to earn three extra credits during her studies at a San Francisco college. She ultimately traveled to Los Angeles and found a job as an Audience Coordinator for the popular daytime television show “Judge Judy.” She subsequently worked on other TV programs, including “Judge Joe Brown,” “Hot Bench,” “Divorce Court,” “Let’s Make a Deal,” “The Price Is Right,” and “Wheel of Fortune.” It was not easy, she noted, for “a black girl from Jamaica with an accent” to break into the business.

Gayle has lived in Sudbury in Canada for the past year with her fiancé. This is the city where Alex Trebek was born. She last made a visit to Jamaica in 2018 and maintains contact with her siblings and other family members who live on the island.