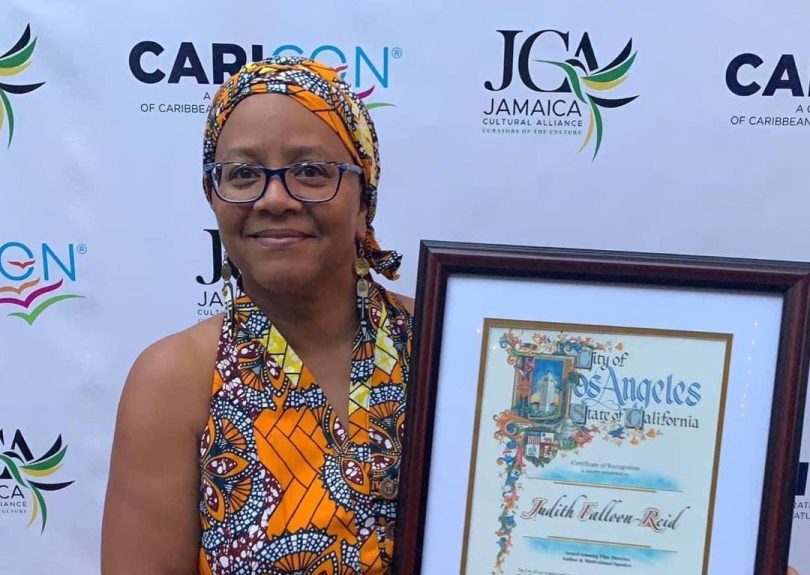 Judith Falloon-Reid is an author, filmmaker, poet, actor, and inspirational speaker. She was honored with a Certificate of Recognition from the City of Los Angeles in California for her authorship of novels, children’s books, inspirational self-help books, and fiction, as well as for her work as director of four award-winning films. Falloon-Reid was also recognized for being the first Jamaican woman in recorded history to visit Antarctica, producing the documentary entitled, “Aah-Inspiring Antarctic – A Jamaican on Ice.”

At the time of the certificate’s presentation at the fifth staging of “Caricon,” the Caribbean Literary Conference in early June 2022, Falloon-Reid was participating as a presenter, something she did in 2020 and 2021. Her 2022 presentation was entitled, “Self-Publishing 101 4 Anyone.” She said she was now expecting the honor and was “totally blown away” by it, as she was unaware that the City had taken notice of her particular endeavors in a city known as a creative hub.

The citation on the certificate reads, “The City of Los Angeles and Council District 8 join in recognizing Judith Falloon-Reid an author, poet, filmmaker, actress and inspirational speaker. We commend you for authoring several novels, children’s books and inspirational self-help books. With 35+ years of experience as a writer that has covered everything from news to travel, Christian Self-help books to fictional.” It then mentions her travel to Antarctica and the documentary production arising from it. The Certificate’s citation ends with, “Judith Falloon-Reid is truly an inspiration to us all. We wish you the very best of luck and continued success in all your endeavors.”

Judith Falloon-Reid, who was born and raised in Jamaica, describes herself as “a missionary art heart,” as a person with a “free spirit” that has brought her into the lives of many people in pain as a ministry worker, writer, filmmaker, poet, radio host and speaker. Falloon-Reid also pursues a professional career as a marketing consultant and corporate trainer. She is the writer and lead director of the first award-winning Feature Gospel films from Jamaica, as well as several subsequent award-winners in the same category. “Just Another Friday” received the Best Jamaican Feature Film Award at the International Reggae Film Festival in 2013. It also won awards for “Best Music Score” and “Most Inspirational Film” at the Central Florida Christian Film Festival in 2014. Another film released in 2013, “The Gift Everlasting,” brought her the “Best Female Director (Faith Films) at the Florida Movie Festival in 2015. “70 x Seven” received the award for the “Best Inspirational Film” at the CaribbeanLens Film Festival in Hollywood in 2017, and “Just Another Friday 2” was awarded the title of “Best Feature Film at CaribbeanLens in 2018. Falloon-Reid also wrote, directed, and acted in the short “iWitness,” which was released in 2018, and short documentaries including “A Deep Breath,” “Escape to Bird Island,” and” Aaah-Inspiring Antarctica, A Jamaican on Ice.”

She is the host of the weekly radio program “Inspirationally Yours,” which airs on irietiems.com, and the founder of “Independent VoYces Literary Fair. She is a founding member of Jamaica Drums 4 Peace and the former host of Gospel Rhythms and Shelf Life. She actively volunteers for “Jamaica Youth for Christ, and Falloon-Reid and her husband, Michael Brown, founded its film division. They also run the training department and are facilitators of the drama ministry. The couple also owns BarriVision Films and have founded the “Inspired Faith Film Festival,” “The Jamaica International Film Festival,” and the Palm Bay Caribe Film Festival.” They created several shows for television, including “Where in JA is Dry Lan’ Touris’,” “My LiKKle Food Spot,“ “Shelf Life,” and “Gospel Rhythms.” Falloon-Reid also founded ByHisWord Outreach & Theatre Ministries and has written for various publications.