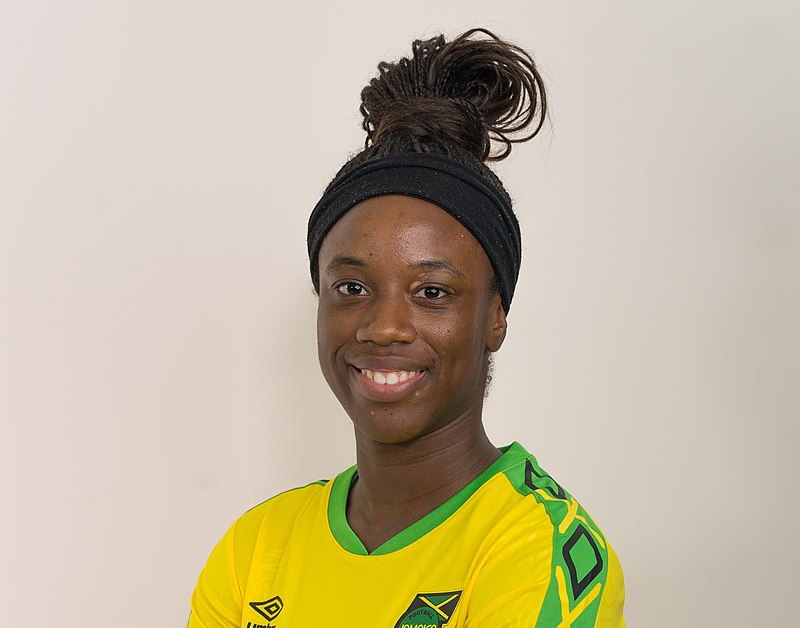 Canadian-born Jamaican Reggae Girlz Player Tiffany Cameron is a member of the Ferencvárosi women’s football team that won the Hungarian Cup for the sixth consecutive time with a 5-1 victory over Astra Hungary.

Cameron plays the forward and midfielder positions for the Reggae Girlz, Jamaica’s national women’s football team. During her soccer career, she has played for Borussia Mönchengladbach in the German Bundesliga, F.C. Ramat HaSharon in Israel’s top-division Israeli First League, and TSG 1899 Hoffenheim in the German Bundesliga. She also played for the Seattle Reign FC and FC Kansas City in the National Women’s Soccer League and for Apollon Limassol in the Cypriot First Division. Additionally, Cameron played for the Canadian women’s national soccer team.

The Jamaican Reggae Girlz team member was an NSCAA second team All-American and twice a first team All-Big Ten choice, while playing for the Ohio State Buckeyes, where she was also the all-time top goal scorer, having earned 96 career points and the most in the history of the school. In 2012, her senior year, she led the school’s team with 21 goals, breaking the previous Ohio State record of 13 goals. Her nine match-winning goals were the most in the nation, while her 19 career game-winning goals placed her in a tie for the fourth-highest total in the history of the Big Ten.

Cameron signed with the Seattle Reign in 2013 for the inaugural season of the NWSL. On June 19th of that year the team released her due to a rule requirement, and on June 26th, she signed with FC Kansas City. In 2014, Cameron joined the German team TSG 1899 Hoffenheim and then Apollon Limassol in 2015 to play in the UEFA Champions League group stage matches in August of that year. She appeared three times in the Champions League and scored three goals. In October 2015, Cameron signed with FC Ramat HaSharon, a team in the top First League division in Israel, where she won the Golden Boot by scoring 38 goals in 24 matches and helping the team get the first League Championship in its history. She signed with Borussia Mönchengladbach in 2016; it was promoted to the German Bundesliga for the 2016-2017 season.

She represented Canada in January 2013 at the Four Nations Tournament in China and previously represented the country as part of its U-17 women’s national team. She played four matches at the FIFA U-17 Women’s World Cup, helping the team reach the quarterfinals. In 2008 she played in the CONCACAF U-17 championship and led the Canadian team, which won a bronze medal, in the scoring. Cameron played six matches for Canada at the senior level, all of which were friendlies, and after the historic FIFA Women’s World Cup qualification by the Reggae Girlz, she joined the training camp roster in January of 2019. Her debut was a friendly win of 1-0 versus Chile in February 2019.

Cameron was born in Toronto, Canada, to Yvonne Brown and Donovan Cameron of Jamaica. She attended St. Joseph’s Secondary School in Mississauga, Ontario, playing basketball for three years there and soccer for one year.