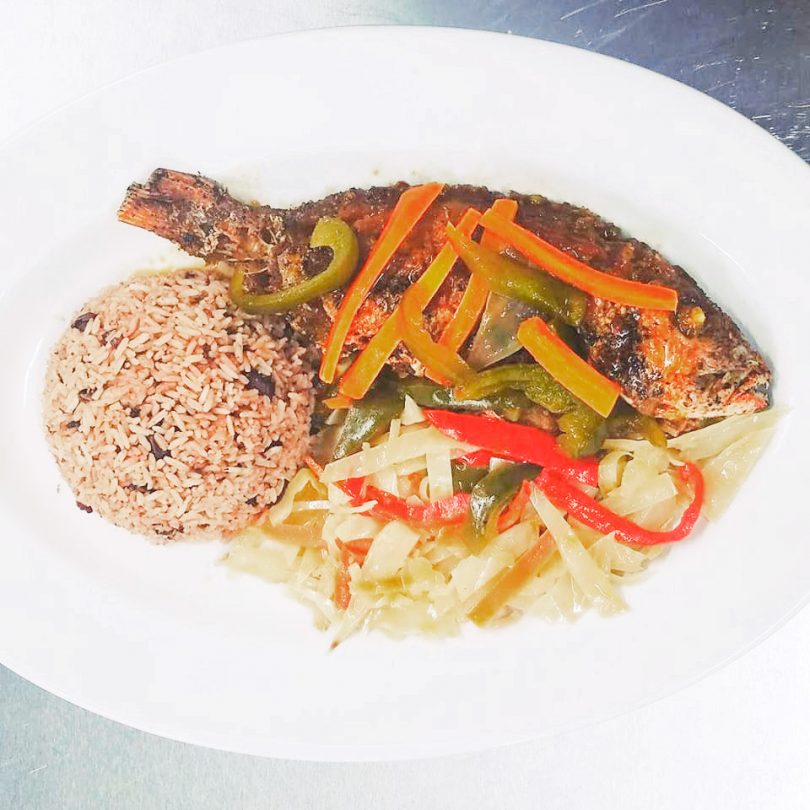 A new family-owned Jamaican restaurant has opened in Newington, Connecticut. The restaurant is called SAZ, which is an acronym for “Sonia, Sons, and Sisters,” says owner Delores Campbell. Campbell said she used a “Z” instead of the expected “S” because she didn’t want people to confuse the restaurant’s name with the word “sass.” Campbell’s sisters do the cooking, and one is also a manager. One of Campbell’s sons works as a deejay in the restaurant, while another son is a busboy.

The family members – four sisters and Campbell’s two sons – work to make the restaurant a success, and everyone there is training and learning everything about its operations, she said. SAZ differentiates itself from other Jamaican restaurants by offering vegan options on the menu, and by catering to different people, its foods are not overwhelming to anyone’s palate. Campbell said she loves Jamaican food, but the way that most people cook it, it is a bit too spicy.

She favors the goat and oxtail, but is gluten-sensitive, so she understands about cooking for the average person coming in off the street. Her food is not overly spiced, but if diners want spice, they will get it. Campbell is also doing some juicing because of her diet sensitivity, and part of the bar will focus on healthy beverages and meal replacements. Before she opened SAZ, Campbell managed a Jamaican restaurant in Hartford called “Golden Krust” for 22 years. Her sisters worked there as well. According to Campbell, it is her love of cooking and entertaining that prompted her desire for her own business.

She had always planned to have her own restaurant, although she didn’t know when or how, but she always had a drive toward that goal. Campbell began cooking at a young age watching her mother cook and then attended cooking school in the 1980s. She began baking then as well. Campbell incorporates her own dishes into the restaurant’s menu of traditional Jamaican cuisine. “Everybody likes my food,” said Campbell. “I make my sauces from scratch, and I make a vegetable-based rice. I call the rice ‘fiesta rice.'” She obtained the space for SAZ in January of 2018, opening the restaurant on March 12, 2018. A grand opening is planned for June 23. While SAZ does not deliver, it does offer takeout options.