My first visit to Hong Kong and China was in 1992.  As we landed in HK, I was overcome with tears as my father wanted to revisit Hong Kong and the village where he lived and never made it back. He left China around 1936. He kept putting the trip off for when he retired. When he retired, he was diagnosed with colon and liver cancer and could not make the trip. He told me to never let that happen to me, to follow my dreams and not to wait till I retire to do what I wanted to do. Uncle Lincoln also told me, if I wanted to travel and do not have the cash, “Go truss the ticket”.  Based on their advice I have traveled frequently. Besides my first visit in 1992, I have been to Hong Kong frequently since 2000 and was due to go in March 2020.  However, protests and COVID-19 prevented a visit. 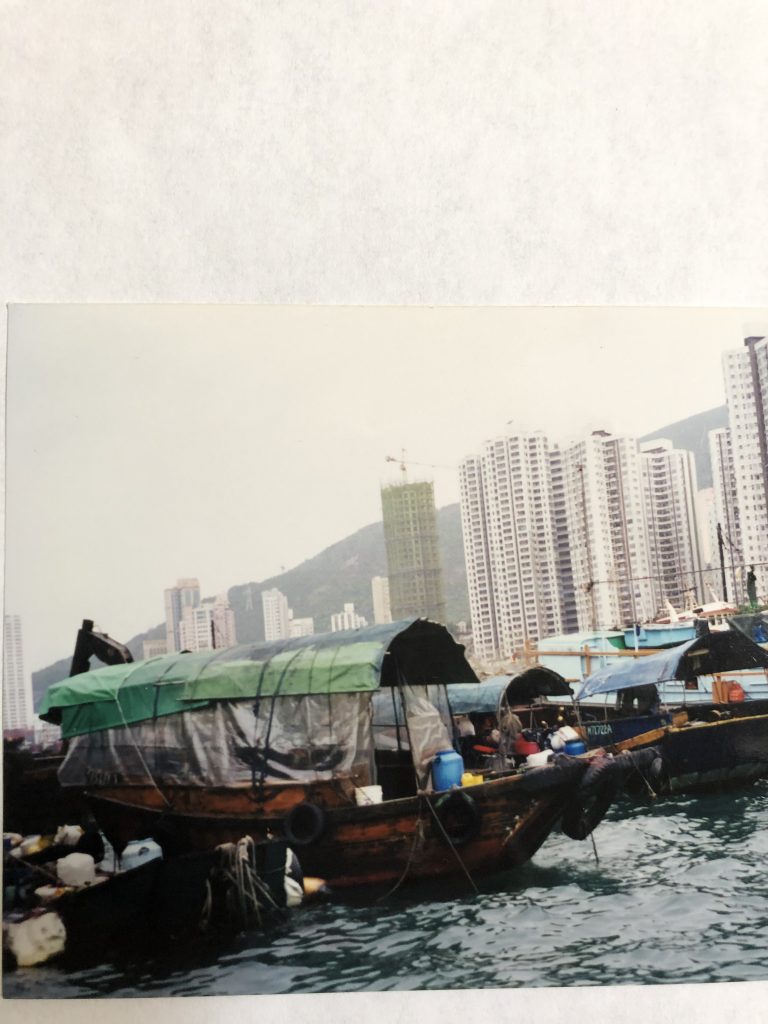 In 1992 and another visit to Hong Kong in 2000, I took sampan rides through the floating village of Aberdeen.  It was interesting to see refrigerators, washing machines, and people cooking on the sampans. A subsequent visit in 2010 showed the sampans disappearing. Most have been replaced by motorboats. 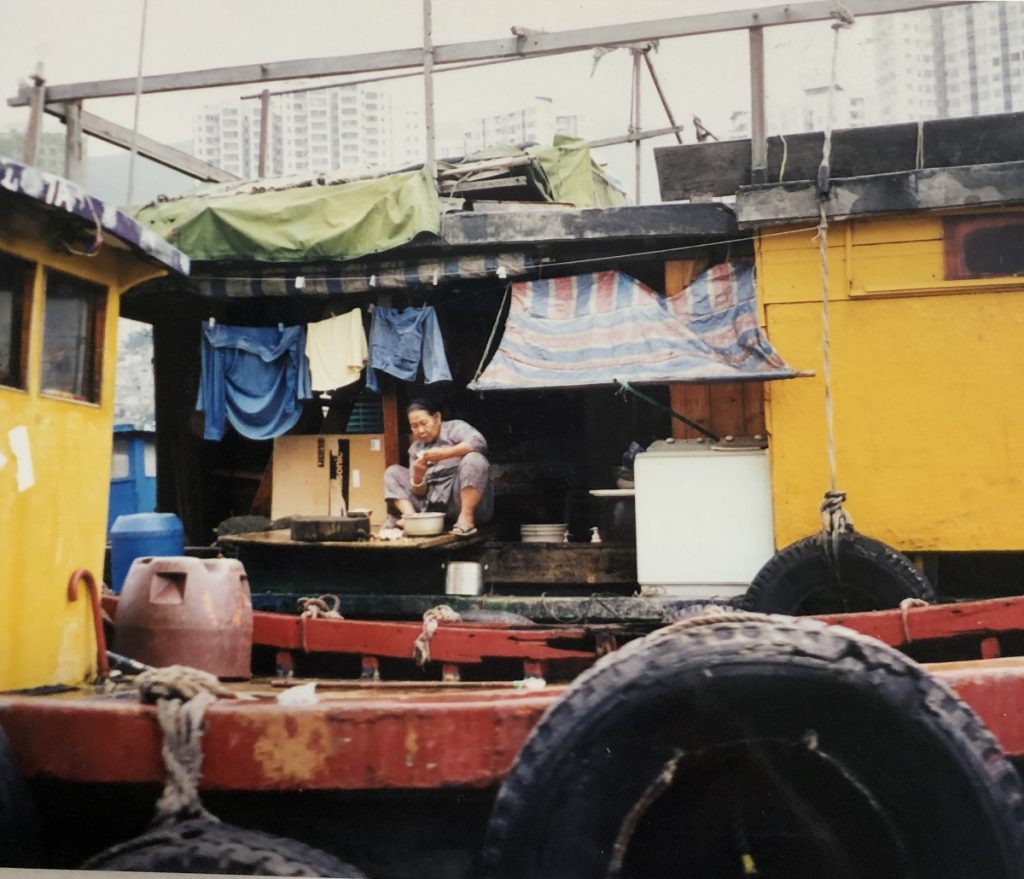 In 1992 I took my first sightseeing trip to Victoria Peak by bus. In 2018, I went up to the peak by tram and was amazed to see the Peak Tower had developed with many shops and eating places.   The view from the Peak Lookout is an amazing 360-degree view of Hong Kong.

On July 1, 1997 Britain returned Hong Kong to China and they built a new airport before they left.  Hong Kong Airport is now on Lantau Island.  I found landing in Hong Kong in 1992 very scary as we flew so low, it seemed we were flying between tall concrete buildings. On Lantau, my daughter and I visited the Po Lin Monastery to see the world’s biggest (112 ft.) bronze Buddha in the world.

In 2000, my cousin and I took the Kowloon train (KRC) across the border to Shenzhen and a 30-minute taxi drive to get to our family village. We were guided by cousins living in Hong Kong and visited the house where our fathers lived.

We drove by the village of Ngou Wu where the Jamaican “Williams” (Wei) family and “Chin” families came from. There is a water tower at the entrance to the village, but I did not go into the village either in 2000 or 2010 as I had no contact there.

We went to my father’s village (Jun Zi Bu) the “Lyn Fatt” village in 2000. My father told me there was a pond in front of the house where he used to love to play. In 2000 there WAS a small “pond” (area) with a large rock, and grass but it was only about 15 feet in diameter. It got much smaller over the years but when I saw it, I knew what he was talking about.

Our family house was in disrepair in 2000 but when my daughter and I visited in 2010, it was cleaned up and rented by cousin who takes care of it. The house reminds me of my grandparents’ shop/house in Blackwoods, Clarendon.  The kitchen and the stairs going up to an attic with an entrance to the roof were similar. The “Pond” was no longer there. We had lunch with the family at the local restaurant. 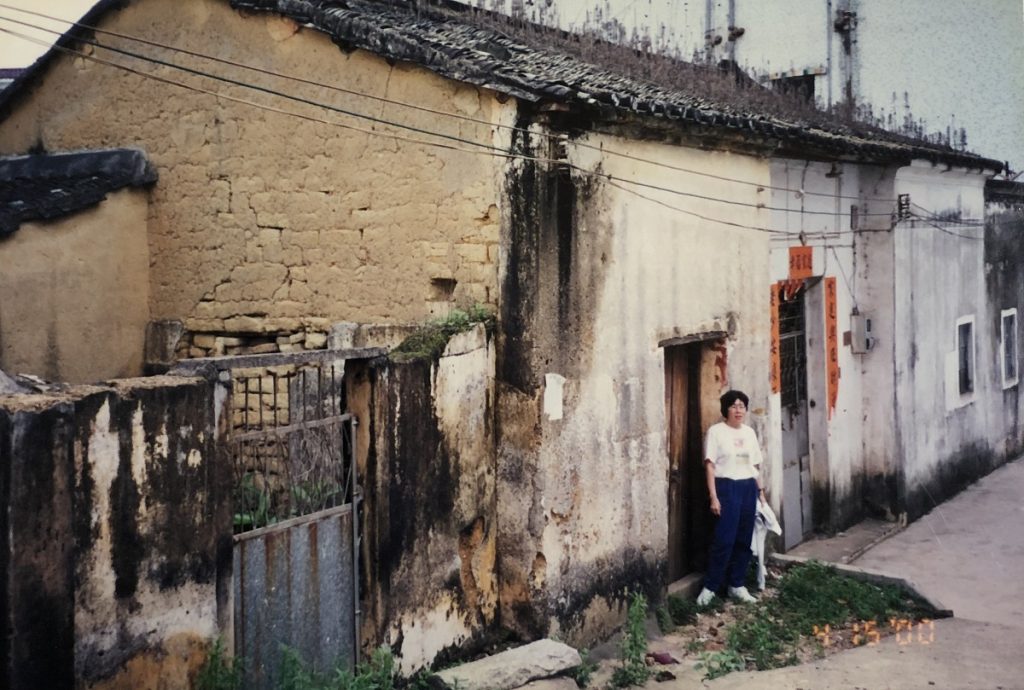 On our 2000 visit, my cousin and I stayed in the neighboring village, Lao Wu, where Tai Goo (her aunt) lived, for one awesome night. We slept under a mosquito net that was held up with 4 bamboo poles.  She got up to go to the restroom during the night and the net fell.  We laughed so hard that night. There were chickens walking around that reminded me of Westmoreland/Jamaica.  In the village of Lao Wu, there is a watchtower in front of Tai Goo’s house that was built in the 1500s. 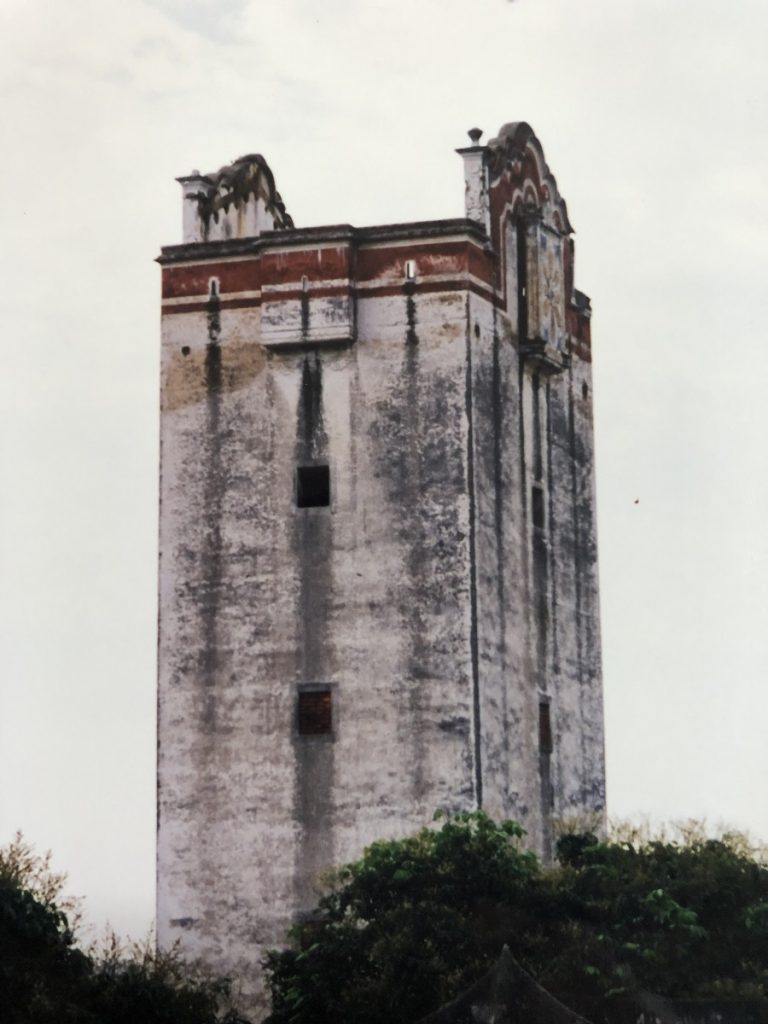 My father was born in Jamaica and was taken to China when he was about 5-6. His father died, his uncle adopted him, and he was sent to China on a boat with a family friend. He told me of the long trip, and he had a toothache and cried most of the trip. He returned to Jamaica when he was about 18. I took the youngest photo I could find of him with me. 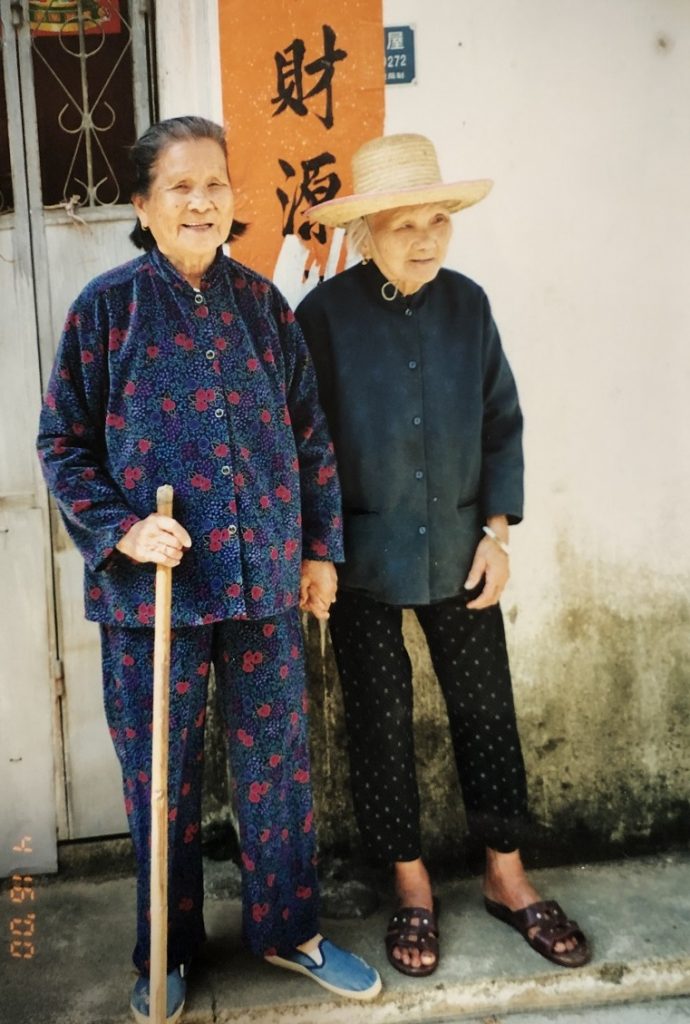 When we visited our family house with Tai Goo, we met a lady at the house and when I showed her and Tai Goo my Dad’s photo and they read his handwriting on the back of the photo, I heard… “ Ahhh, SuFah”  and they were laughing and talking about my Dad as they remembered him.  I could not understand what they were saying and my cousin who accompanied us from Hong Kong translated. I regret I did not have a video camera to capture their reaction the moment when I showed them my father’s photo. Tai Goo died in 2001, the year after I met her. 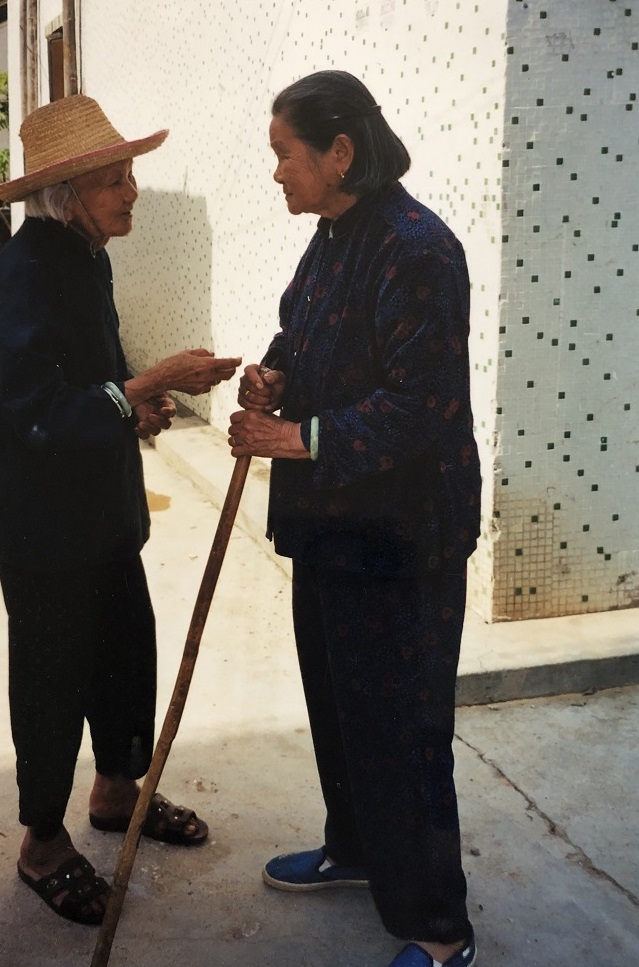 To get to the family village, we travel through Shenzhen. In 2000, Shenzhen was booming, and many skyscrapers were being built. The streets were busy, and I was constantly bumping into people. In 2010 it was still bustling, and I am sure will be just as busy 10 years from now. During a walk in a park in Shenzhen, we saw mothers trying to find mates for their children. They hung biographies of their children on a clothesline and we were approached asking if we had a son or daughter. 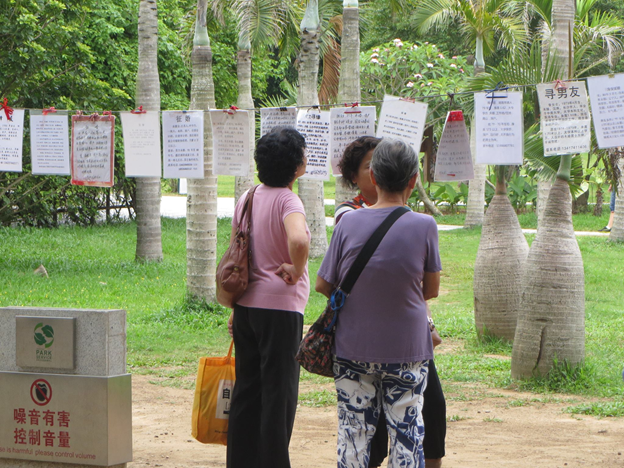 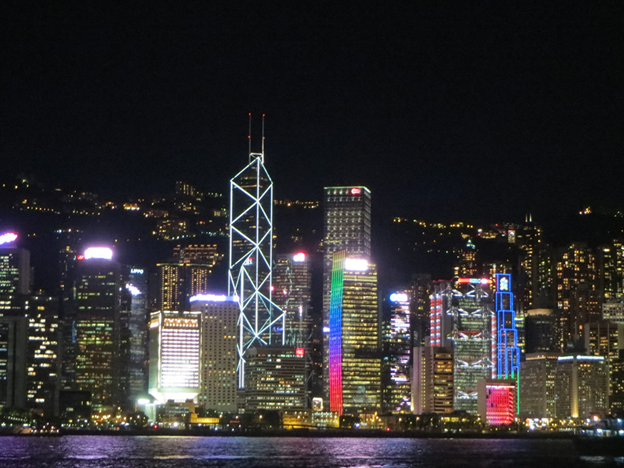 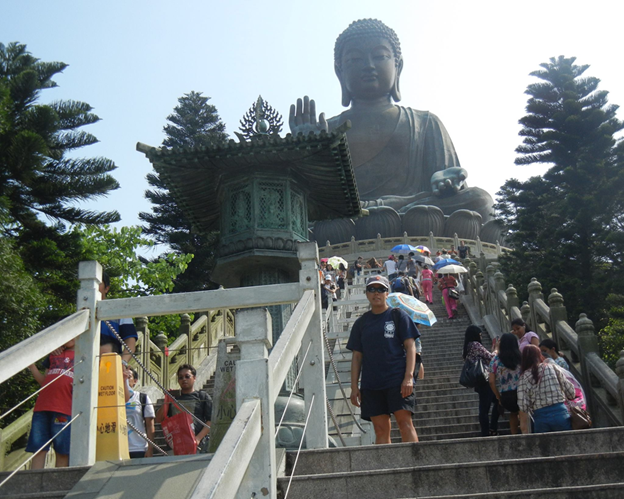 Tracey in Lantau at the giant Buddha

Things to do in Hong Kong: 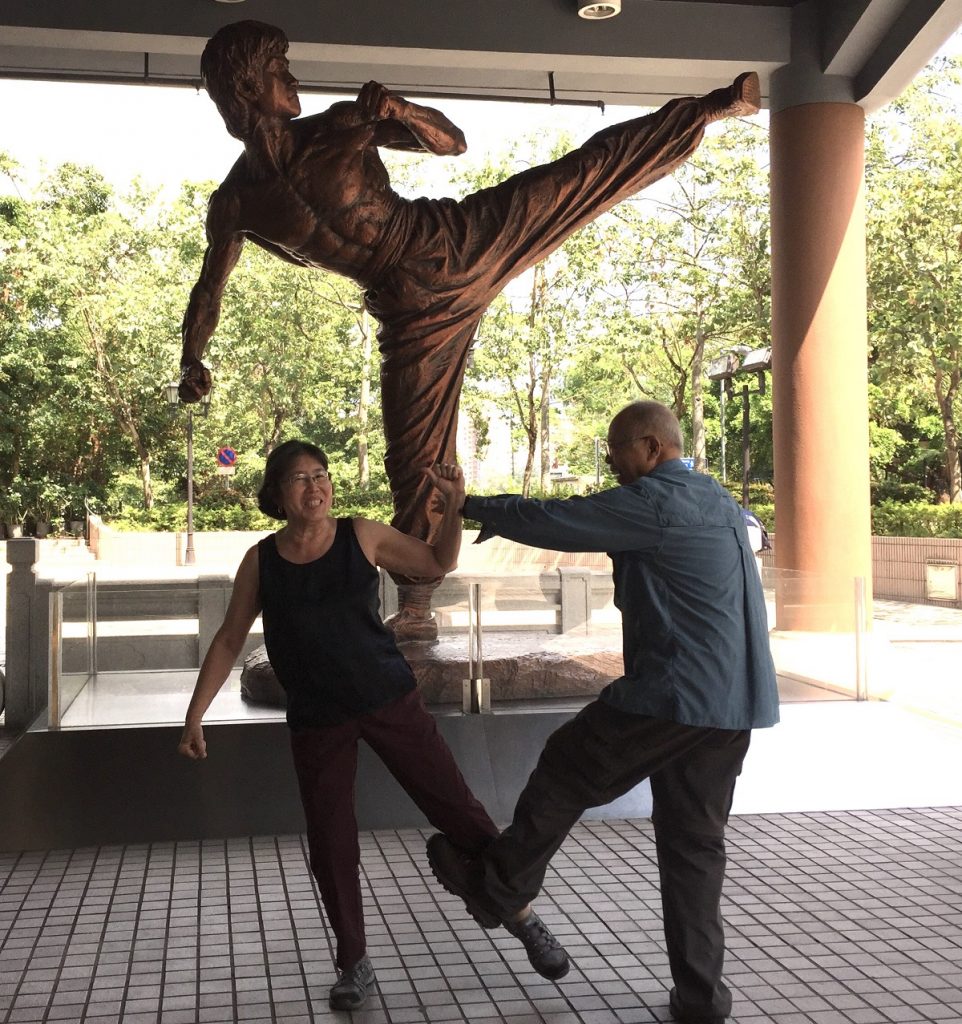 At Hong Heritage Museum in Sha-Tin under Bruce Lee statue

Tips if you are NOT joining a tour group.

When you arrive at HK airport buy an Octopus Pass at a kiosk at the airport exit.
There is a deposit of HK $50 (US $7). Buy approximately HK $100.  You can top up as needed at any MTR stations. You will be refunded when you turn in card when departing. You can take the local bus or MTR and even use it at places like McDonalds. Get a colored map of the train routes to know where you are going and how to connect. The hotel Concierge desk usually has colored maps. In October 2018, the train station had only black and white ones.

For Seniors: Trips were about HK $2 (approximately US $.35) per trip. Ferry trips are free for seniors.