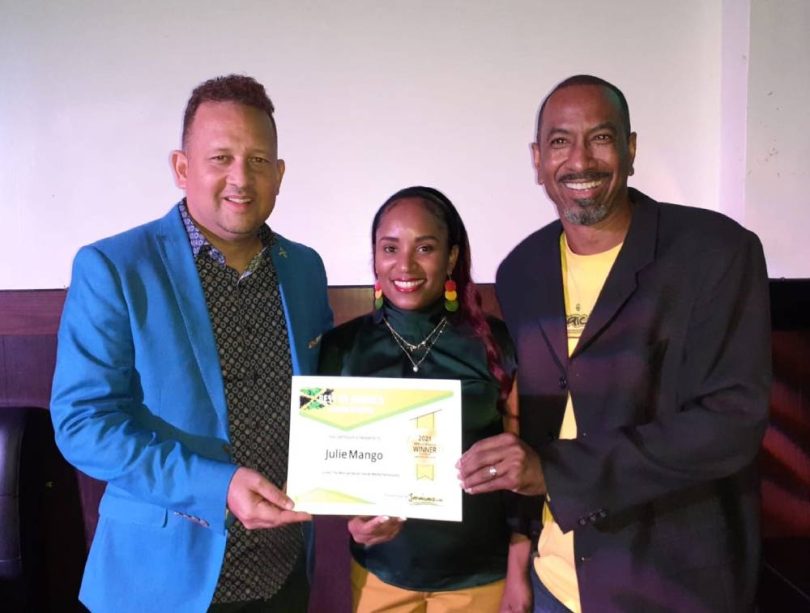 Jamaicans.com founder Xavier Murphy and Jamaica Consul General to Miami Oliver Mair surprised Julie Mango with the presentation of the “Best Jamaican Social Media Personality” award during the Reggae on the Pier World Wide Simulcast on February 27, 2022. Mango won the award by getting the most votes in the yearly “Best of Jamaica” survey sponsored by Jamaicans.com.

Media personality Julie Mango was in South Florida to host the “Reggae on the Pier” event along with Consul General Oliver Mair. During the broadcast, the Consul General announced a surprise award and he asked Murphy to join him in the presentation. 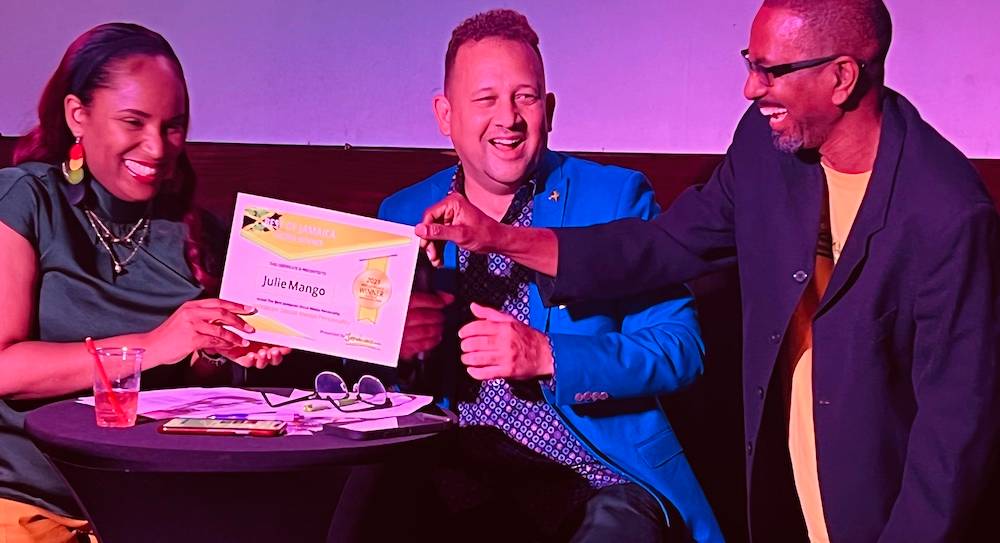 Julie Bodley, better known as Julie Mango, was born and raised in Clarendon and moved to Manchester when she was 11. She learned patois, slang terms, and performance skills by watching her father Basil and her uncle, Hugh Bodley, who were both natural performers. She attended Manchester High School, working with the drama club Ayaedeh. Julie Folie, her drama teacher, was instrumental in helping the budding media star refine her natural talent.

When Mango was 19, she earned a private pilot’s license via a scholarship program of the Jamaica Combined Cadet Force. She then attended the University of Technology as a structural engineering student with the goal of becoming a professional engineer. She received a master’s degree in engineering management from Florida International University and worked in Jamaica for several years.

Her love for performing arts never left her, however, and she often found herself entertaining people in informal settings and realized she had a natural talent for it. While working as an engineer and pursuing her hobby of performing, she experienced some mental health challenges, which she discussed openly later on social media. These personal experiences prompted her to become a mental health advocate whose goal is to eliminate the stigma associated with mental illness.

Julie Mango began her popular TikTok initiative at the beginning of the COVID-19 lockdown, creating her first video “How Jamaicans Give Praise vs. How Americans Give Praise,” and while she did not expect to draw a large audience, the video went viral, and her career as a media personality was launched. She now produces content every weekday, focusing on skits about the people and culture of Jamaica and posting to Instagram and TikTok. She hopes that she will be able to pursue a full-time acting career in the future.

The “Reggae on the Pier” event is a livestream concert produced by VP Records together with Jamaica’s Ministry Culture, Gender, Entertainment, and Sport. The 2022 event was streamed on VP Records’ YouTube channel and Reggae Month TV as well as on the Jamaica Cultural Development Commission’s YouTube and Facebook pages; and the Facebook pages of the Ministry of Culture, Gender, Entertainment and Sport, and of Minister Olivia Grange; and on PBCJ and TVJ. The event featured Beres Hammond, Marcia Griffiths, Derrick Morgan, Richie Spice, Christopher Martin, Romain Virgo, and Tarrus Riley. It began with a special DJ session starring the legendary producer and sound system champion King Jammy, who streamed his performance live from his studios in Waterhouse.