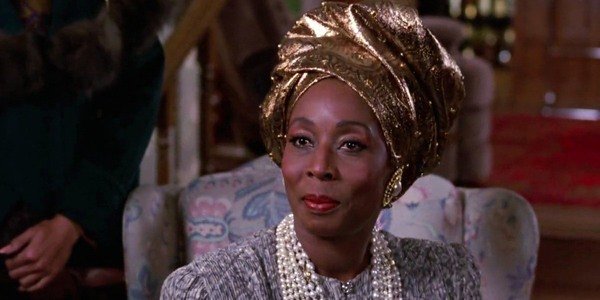 Madge Dorita Sinclair was a teacher and a very good one, who excelled in speech and drama. She even won several awards. But she wanted to be an actress. Badly. So at the ripe old age of thirty, Madge Sinclair packed her bags and headed for New York to follow her dream. She had to wait…and wait…and wait awhile. So she went to acting school and did modeling to pay her way. Then she got her chance, the New York Shakespearean Festival!

In her first acting role – her debut – she played the part of Mrs. Scott in the movie ‘Conrack’. It is the life story of Pat Conroy, a teacher on Gulag Island off the South Carolina coast in the USA. Only black families who speak their own language live on this island. Mrs. Scott was the head teacher of the school.

Some of her more famous acting roles include ‘Roots’, a television series on the story of an African American Alex Haley who traced his family roots from the African country of Gambia to the USA during slavery. She acted as the mother of Simba in the Lion King, one of the most popular Walt Disney movies ever. She also acted as the mother of an African Prince who went to America to search for a wife. (Coming to America) But her longest period on television was as Nurse Ernestine Shoop in the medical series Trapper John, MD.

Ms. Sinclair was such a very good actress that she was nominated for an Emmy Award several times. The Emmy Award is the highest award for television actors. In 1991, she finally won her Emmy as Best Supporting Actress in a Drama Series, Gabriel’s Fire’, the true story of a Chicago Police Officer.

Ms. Sinclair acted for more than twenty years and played many different roles. She never lost her Jamaican accent, and, as a true patriot, used every possible opportunity to speak of the country of her birth, both on and off screen. For this, . she was awarded Jamaica’s National Honour – Order of Distinction, Commander Class (CD). Madge Dorita Sinclair passed in 1995. Her legacy is indelible.

Talented: To be gifted and accomplished in whatever you do.