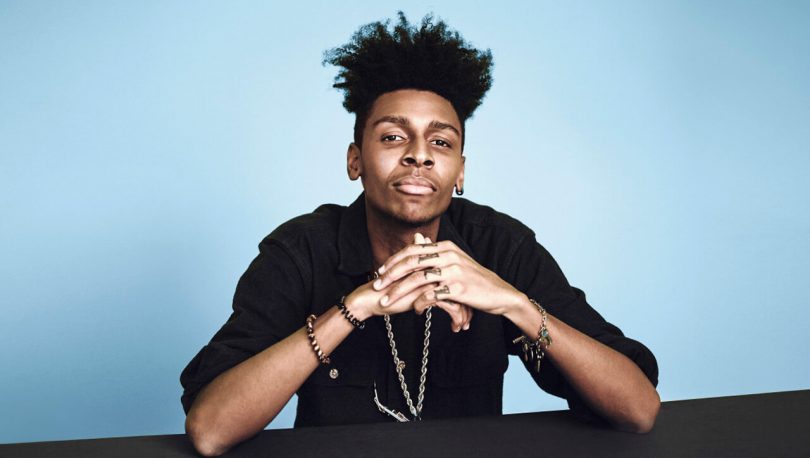 Jazz singer and saxophonist Masego, who was born Micah Davis in Jamaica and raised in Virginia, is the subject of a feature article in Vogue magazine that his “deep dive into hip-hop’s jazz roots” is what differentiates him from the current emerging rappers. Masego, 25, calls his amalgamation of saxophone and trap and house sounds “TrapHouseJazz,” an approach that has found its most complete realization in his debut album “Lady Lady,” which was released on September 7, 2018. Masego said that “playing saxophone over trap beats just wasn’t done back home in Virginia, a place where southern rap is popular.

With the album, Masego, who is also known as his alias “Uncle Sego,” is no longer an artist who is remixing tracks with his saxophone for the SoundCloud series “Woman Crush Wednesday,” but someone who continues to walk a line between newcomer status and real industry success. DJ Jazzy Jeff is one of Masego’s mentors, and he has also collaborated with the rapper GoldLink. Masego has worked with electronic producer French Kiwi Juice (FKJ) as well. “Lady Lady” is the first representation of what the artist has learned, as well as a continuing departure from what he characterizes as his “sheltered” upbringing.

Both of Masego’s parents are pastors, and he has said there is a lot of music he hasn’t heard. When he left home to attend Old Dominion University, he was exposed to a “crash course” in secular music from artists like OutKast, Kanye West, and Lupe Fiasco. Although some musicians might consider the absence of pop culture from their early life to be a weakness, Masego believes it is that very lack of awareness that has allowed him to create the music he makes. He credits his solid foundation in gospel music as the basis of his sound. He does admit to wishing he had more experience, however, and this is something he explores in “Lady Lady.”

He is quoted in Vogue as saying, “I didn’t get to have a girlfriend, bring her over to the house. I’m a lot slower understanding some of those things, but I never see it as a disadvantage. I see it as my own personal journey and what shaped [my] path.”

Masego’s debut album is an homage to all of the women in his life, including the substitute teacher on whom he had a crush and who inspired him to learn the saxophone because she carried a binder with a photo of saxophonist Najee on it. The songs refer to the feelings these women inspired in him and how they led him to his present life. “Queen Tings” includes the names of Lupita Nyong’o, Danai Gurira, and Solange Knowles, and was written in response to his feelings about Black History Month and the release of the film “Black Panther.” The song “Old Age” refers to a relationship he had with an older woman, and “Black Love” was written in response to a train trip he took to see a woman he met on Instagram.

Thinking about the stories behind each of his songs, Masego describes the album as an “aural manifestation” of his future dream world. “I write about love so I can keep focused on the true goal,” he said, which is to be with his “lady lady,” to travel with her, and have his “li’l family unit.”