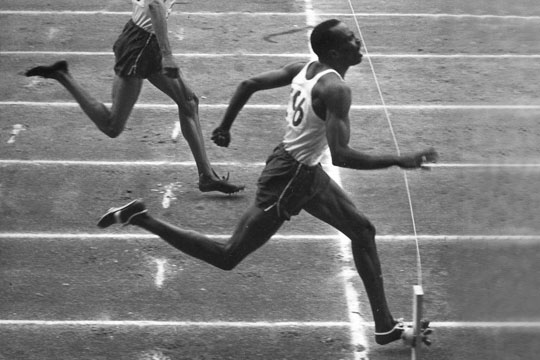 On 13 December 1926, Olympic runner George Vincent Rhoden was born in Kingston. On July 25th, 1952, George Rhoden won the Olympic 400-meter race in Helsinki, Finland. Rhoden first competed on the global stage at the 1948 Olympics, but did not win a medal that year. He was a member of Jamaica’s 4×400 relay team, which was heavily favored to win, but a pulled muscle suffered by Arthur Wint in the final ended the team’s chances for a medal. At the beginning of the 1950s, Rhoden was considered one of the top long sprinters in the world. He set a world record in the 400-meters on 22 August 1950 at Eskilstuna, Sweden, with a time of 45:80. Rhoden was one of the first Jamaicans featured in an American advertising campaign when in 1960, he appeared in print ads for Kent cigarettes targeting black Americans. Rhoden has been called the best quarter-mile runner in history to have represented Jamaica. He was the first West Indian to win two gold medals at the same Olympic Games in 1952 in Helsinki. He won the 440-yard dash, defeating his teammate Herb McKenley, and anchored the mile relay team for a win, defeating the United States. Rhoden won AAU championships in the 400-meters in 1949-51. As a student at Morgan State University, he won NCAA championships in 1951 in the 220-yard race and in 1950-52 in the 440-yard race.