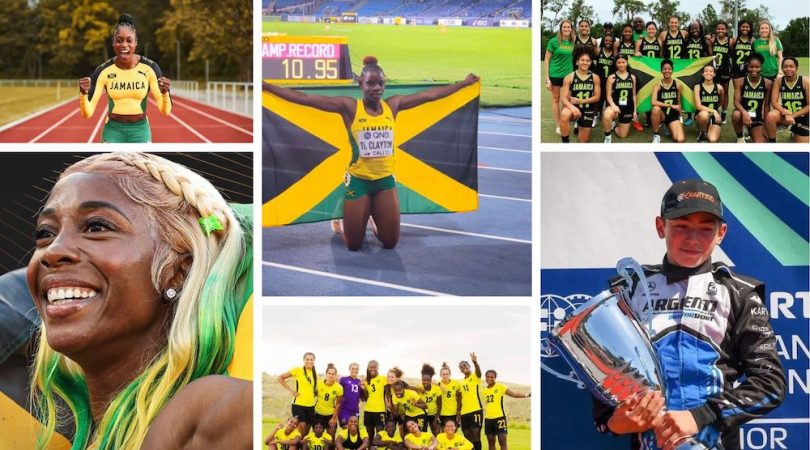 Jamaica’s athletes continued to astound the sports world with their achievements in 2022. A young teenager made history as the first Jamaican to win the FIA Karting European Championships, Tina Clayton was named International Junior Athlete of the Year, and Lamara Distin achieved a new national record in the high jump. The Reggae Girlz made an appearance at the CONCACAF Women’s Championships, and the Jamaica Athletics Association Suggested that Elaine Thompson-Herah’s 100-Meter time be recognized as a world record. Jamaica was the first Caribbean country to compete in the Women’s World Lacrosse Championships, and the nation’s powerlifting team won Jamaica’s first medal ever at an international competition. The Reggae Boyz got a new head coach from Iceland, and Jamaicans Shelly-Ann Fraser-Pryce and Shericka Jackson were awarded Jamaican national honors for their achievements in sports. Nicola Guy won her first national title at the Jamaica Rifle Association National Championships.

14-YEAR-OLD JAMAICAN ACHIEVED VICTORY IN KARTING CHAMPIONSHIP
Jamaican Alex Powell, 14, made history and became the first person from Jamaica to achieve victory at the FIA Karting European Championships in Kristianstad, Sweden, on June 8, 2022. He was also the first karter from the Caribbean region to win at the championships. Jamaican Prime Minister Andrew Holness congratulated Powell via social media, noting the historic achievement and Powell’s success in making a name for himself and Jamaica in a sport frequently dominated by drivers from Scandinavia.

JAMAICAN TINA CLAYTON NAMED 2022 INTERNATIONAL JUNIOR ATHLETE OF THE YEAR
Athletics Weekly named Jamaican sprinter and World Athletics Champion the International Female Junior Athlete of the Year for 2022 on December 8, 2022. Clayton was included on a shortlist for the award presented according to the selection of Athletics Weekly readers. Also on the list was fellow Jamaican track and field athlete, Kerrica Hill. Clayton received the award in recognition for her outstanding performance during the 2022 season in which she won the World Under-20 100-meter championship title, clocking 10.95 seconds for the distance, a new record. She was also a member of Jamaica’s 4×100-meter female relay team that won the gold medal in that event at the World Championships with a world record-breaking time of 42.56 seconds. In addition, Clayton managed to continue Jamaica’s dominance at the CARIFTA Games, winning gold medals in both the 100 meters and 4×100 meters. Tina Clayton is currently in training at the MVP Track Club based at Utech.

REGGAE GIRLZ SECURE SPOT IN CONCACAF WOMEN’S CHAMPIONSHIP
Jamaica’s Reggae Girlz participated in the CONCACAF Women’s Championship tournament after their 5-1 victory over the Dominican Republic on April 12, 2022. The Girlz had an early lead with a goal by Jody Brown. The Dominican Republic equalized things in the 24th minute, but Jamaica again took the lead in the 40th minute via Trudi Carter. A third goal in the 60th minute by Tiffany Cameron added a third goal, and Khadija Shaw scored in the 79th minute for a score of 4-1. With a header in the 93rd minute, Shaw solidified the win at 5-1. The victory put Jamaica at the top of Group C, achieving a perfect 12 points on four games.

JAMAICA ATHLETICS ASSOCIATION SUGGESTED THOMPSON-HERAH’S 100-METER TIME SHOULD BE RECOGNIZED AS WORLD RECORD
America’s Florence Griffith-Joyner is the current record-holder in the 100-meter event, running the distance in 10.49 seconds in 1988 at the US Olympic Trials. Her performance raised questions in regard to the wind reading at the time of the race, however. The president of the Jamaica Athletics Ad-ministrative Association (JAAA), Garth Goyle, therefore, suggested that the wind-legal time in the 100 meters achieved by Elaine Thomson-Herah should receive the designation of the world record at that distance. He added that the organization is ready to lobby on behalf of Thompson-Herah, despite the opinion of the president of World Athletics that legal challenges could apply and that changing records without a “burden of proof” is difficult. Thompson-Herah won three gold medals at the 2020 Tokyo Olympics and broke the Olympic record. She signed with Puma in 2022.

JAMAICANS PROUD TO BE FIRST CARIBBEAN COUNTRY TO COMPETE IN WOMEN’S WORLD LACROSSE CHAMPIONSHIPS
The Jamaican women’s lacrosse team was the first from a Caribbean country to compete in the World Lacrosse Championships. The team was part of Pool C, which includes Germany, Wales, Uganda, and Latvia. The tournament ran from June 29 through July 9, 2022, at Johnny Unitas Stadium at Towson University in Maryland. This was the first time the championship was held in the United States since 2005. Jamaica, which was seeded No. 27 and is one four nations making a debut appearance at the World Championship, opened the group play against Wales on July 1. Lacrosse has gained in popularity in Jamaica, a country traditionally dominated by track and field, soccer, and netball. Currently, 15 schools and 19 teams in local leagues operate in Jamaica. The women’s team earned its place in the 2022 World Championship by placing third at the Pan-American Lacrosse Association (PALA) qualifier.

JAMAICA’S POWERLIFTING TEAM WON ITS FIRST MEDAL IN HISTORY AT INTERNATIONAL COMPETITION
The Jamaica Spartans, Jamaica’s powerlifting team, made a spectacular international debut at the NAPE Regional Championships in Panama City, Panama, by taking home their first medal at a global competition in history. Scott Jennings won a gold medal and also established a deadlift championships record of 312.5 kilograms, or 688.94 pounds, in the 83-kg. weight class. Jennings won in the squat event and achieved a competition record total of 732.5 kg., or 1,614.88 lbs. Jamaican Sami Depass, the only woman in the competition, also broke several competition records. She is the first Jamaican woman to medal in the sport and broke the squat record with 185.5 kg., 408.96 lbs. She also set the deadlift record with 220.5 kg. (486.12lbs.). Depass said she hoped her performance would encourage other Jamaican women to participate in the sport.

ICELANDER HEIMIR HALLGRIMSSON SELECTED AS NEW HEAD COACH FOR REGGAE BOYZ
Heimir Hallgrimsson was named the new head coach of Jamaica’s senior men’s football team, the Reggae Boyz. He replaced Theodore Whitmore, who was removed from the post in December 2021 after achieving poor results with the team. Following Whitmore’s removal, his assistant Paul Hall took over as interim head coach for six months. Hallgrimsson was selected by the Jamaica Football Federation. He previously served as Iceland National Coach and together with Lars Lagerback led Iceland to the quarterfinals of the UEFA European Championships in 2016. Hallgrimsson also led Iceland to the 2018 FIFA World Cup before moving to coach Al-Arabi, the team from Qatar, in 2018. to communicate

JAMAICAN RUNNERS FRASER-PRYCE, JACKSON AWARDED JAMAICAN NATIONAL HONORS
The world champion athletes Shelly-Ann Fraser-Pryce and Shericka Jackson were presented with Jamaican national honors for their achievements in sports on National Heroes Day. Fraser-Pryce, 35, was awarded the Order of Jamaica, Commander Class for Outstanding Performance in the international field of athletics, while Jackson received the Order of Distinction, Commander Class for exceptional achievement in track and field athletics at the national, World Championship, and Olympic levels. Fraser-Pryce won her historic fifth 100-meter title in 2022 at the World Athletics Championship and is the first woman in history to run the distance under 10.7 seconds seven times in a single season.