The Jamaican reggae artist Alton Nehemiah Ellis was a singer and songwriter. He is widely known as one of the discoverers of Rocksteady and gained the title “Godfather of Rocksteady” by his fans. He was born and raised in a music-loving family and attended Ebeneezer and Boys’ Town schools. After successfully winning a few competitions as a dancer, he decided to start a singing career in a duo with Eddy Parkins, in 1959. They recorded at Studio One and their first hit “Muriel” came in 1960, which was written by Ellis while working at a construction site. After winning a major talent contest, Parkins left for the United States and the duo had to split. In the 60s, the rocksteady and rude boy subculture were on a rise in Jamaica. Ellis and many other artists recorded songs which were referred to as the rude boy. However, Ellis’ songs were mostly anti-rudie including “Cry Tough” and “Don’t Trouble People”.

In 1967, Ellis with Ken Boothe toured the United Kingdom and recorded songs for his debut album Alton Ellis Sings Rock & Soul after his return. In the 70s, he began to produce his own records such as “The Message” and” “My Time is the Right Time”. As the recognition of his achievements, the Jamaican government awarded him the Order of Distinction in 2004. 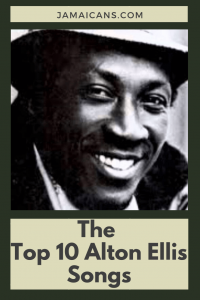