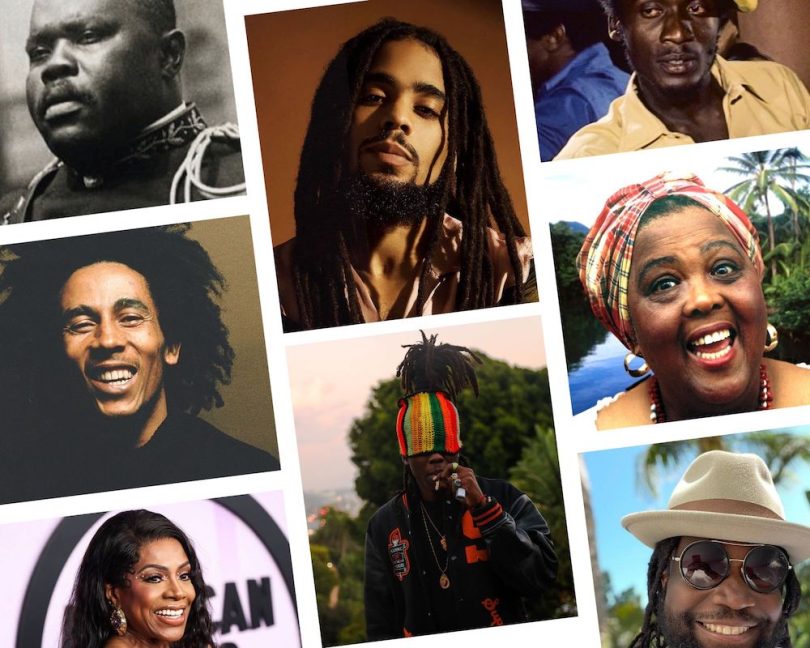 The top entertainment news in Jamaica presented several notable happenings, including the adaptation of the classic reggae film, “The Harder They Come,” into a musical production for the stage. Other stories included the historic Grammy nomination of Blvk H3ro, a Google Doodle honoring folklorist “Miss Lou,” and a historic Emmy Award win for Jamaican actor Sheryl Lee Ralph for her role in the TV comedy series, “Abbot Elementary.” The news also covered the naming of Skip Marley as youth ,ambassador to the Jamaica Poetry Festival, the premier of a documentary about Jamaican National Hero Marcus Garvey and the induction of Bob Marley to the Black Music Walk of Fame. Also in 2022, Josef Bogdanovich acquired the archive of American reggae historian Roger Steffens, a new radio series about Jamaica was launched by Charlie Sloth, and reggae music pioneer “Gramps” Morgan became a Jamaican citizen.

JAMAICAN REGGAE ARTIST BLVK H3RO RECEIVED NOTABLE GRAMMY NOMINATION
The Jamaican reggae artist Blvk H3ro made the most of his Grammy Award nomination and appearance at the award ceremony on February 5, 2023. He was nominated in the Best Global Music Performance category for his featured performance on the song “Neva Bow Down,” by Rocky Dawuni, a Ghanaian musician and activist. Blvk H3ro actually wrote a song about being nominated in 2021. His single recording, “Greatness,” included the line, “Pull up Grammy night with my crew in $10,000 suits.” The Best Global Music Performance award is given to international performers who exhibit “non-European, indigenous traditions. Blvk H3ro was the first reggae artist to receive a nomination in that category.

JAMAICAN CLASSIC “THE HARDER THEY COME” ADAPTED AS MUSICAL
The 1972 classic Jamaican film, “The Harder They Come,” which features the iconic music of Jimmy Cliff, is being adapted into a musical for the stage. Prior to the release of the film, few people had even heard of reggae, but the dramatic story altered this situation overnight. The musical adaptation was scheduled as the film approached its 50-year anniversary. The new production has the support by Justine Henzell, the daughter of the film’s director Perry Henzell and a filmmaker herself. The adaptation is co-directed by Sergio Trujillo and Tony Taccone. It was written by Suzan-Lori Park, and stars Natey Jones, who also played Peter Tosh in “Get Up, Stand Up,” the Bob Marley jukebox musical. Cliff’s musical score remained central to the production, which will retain the songs, “Sitting in Limbo,” You Can Get It If You Really Want,” and “The Harder They Come.”

JAMAICAN CARTOONIST CREATED GOOGLE DOODLE HONORING “MISS LOU”
August 6, 2022, Google Doodle celebrated the 103rd anniversary of the birth of Jamaican folklorist Louise “Miss Lou” Bennett-Coverley. The American multinational tech firm Google commissioned the Jamaican cartoonist Robyn Smith to create the Doodle. Bennett-Coverley, who was better known by Jamaicans as “Miss Lou” had a long career as a folklorist, writer, activist, and entertainer who was a strong promoter of Jamaican cultural pride. The Louise Simone Bennett Coverley Estate collaborated with Google on the project. Cartoonist Smith told interviewers that she was excited about the opportunity to work with Google on a Jamaican subject, especially “Miss Lou,” she “was washed with pride for Jamaica.” Born in Jamaica in 1919, Bennett-Coverley was instrumental in making Jamaican patois an accepted and appreciated language through her writings and performances. She was appointed as a Member of the Order of Merit in 2001 for her contribution to the development of Jamaican arts and culture. She died in her adopted home of Canada in 2006.

ACTOR SHERYL LEE RALPH WON HISTORIC EMMY FOR ROLE IN “ABBOT ELEMENTARY”
Jamaican American actor Sheryl Lee Ralph won the 2022 Emmy award for Outstanding Supporting Actress in A Comedy Series at the 74th annual Emmy Awards ceremony at the Microsoft Theater in Los Angeles. This was the first time a Black woman had won in this category in 35 years. Ralph was presented with the award for her performance in the role of a 30-year veteran elementary school teacher in the ABC series “Abbot Elementary.” The series was described as a “mockumentary sitcom.” Ralph, who sang some lines from a 1993 Diane Reeves’ song “Endangered Species” before making her acceptance speech, told the audience that “This is what striving looks like.” Her inspirational speech counseled listeners “don’t you ever, ever give up on you.” She also said that her win was an example to anyone who every had a dream and thought it could never come true, telling them, “I am here to tell you what believing looks like.” Ralph made her screen debut in 1977 and had her breakthrough role in 1981 as “Deena James” in “Dreamgirls.” She also starred in several TV comedies, including “It’s a Living,” “Instant Mom,” and “Moesha.”

SKIP MARLEY NAMED YOUTH AMBASSADOR TO 2022 JAMAICA POETRY FESTIVAL
Poetry was added as an award category for the 65th Grammy Awards ceremony in 2023, and Jamaican two-time Grammy winner and recording artist Skip Marley was named to be the youth ambassador for Jamaica’s 2022 Poetry Festival (JPF). Marley said he was excited to perform and present the award because, as a singer and songwriter, he focuses on the power and energy of words and music to take listeners “to a higher place.” The Grammys added the category “Best Spoken World Poetry Album” for 2023, and Marley said it makes sense for poetry to be included in the awards, noting that lyrics are poetry, and “poetry is a form of music” made up of various cadences and rhythms.

BOB MARLEY INDUCTED INTO BLACK MUSIC WALK OF FAME
Jamaica’s iconic reggae artist Bob Marley was inducted into the Black Music and Entertainment Walk of Fame in the historic downtown of Atlanta, Georgia. The Walk of Fame honors the historic contributions of Black entertainers around the world. The Walk of Fame is made possible through a partnership of the Black American Music Association (BAM), the Professional Trade Organization, and the George Entertainment Caucus. Marley was inducted in the Walk’s second year. Those inducted in its first year included Quincy Jones, Otis Redding, James Brown, Stevie Wonder, Michael Jackson, Beyonce, Usher, and others. Marley was responsible for the popularization and promotion of Jamaica and its music throughout the world. He was also a strong voice for civil rights and justice. The Walk of Fame recognizes him not only for his music, but for his global leadership in the international Black community.

BOGDANOVICH OF DOWNSOUND RECORDS ACQUIRED ARCHIVE OF REGGAE HISTORIAN
Josef Bogdanovich of DownSound Records acquired the archive of Roger Steffens, the American reggae historian. The archive will be housed in a new facility to be built in Montego Bay at the Catherine Hall Entertainment Center. The acquisition was welcomed by Professor Donna Hope, lecturer in popular culture at the Mona Campus of the University of the West Indies. Hope noted the numerous attempts to acquire the Steffens collection and was glad that it will make its home in Jamaica. Steffens spent over 50 years collecting items of importance to the legacy of Bob Marley, The Wailers, and overall histories of reggae and dancehall. Bogdanovich told Winford Williams on “Onstage,” a program on CVM Television, that he had been negotiating to acquire the property at Catherine Hall of three years and that that deal was nearly finalized. Development of the property will include a world-class performance center. The price paid for the archive was not disclosed. Catherine Hall is the site of Reggae Sumfest, of which Bogdanovich is a principal.

NEW SERIES ABOUT JAMAICA LAUNCHED BY CHARLIE SLOTH AND TEEJAY
The radio deejay Charlie Sloth introduced a new series called “Fire In The Booth: The Jamaica Series.” He was joined on the first episode by dancehall star Teejay. The program was recorded in St. Andrew at Boone Hall Oasis and is designed to showcase some of the best talent in Jamaica. Teejay started the show with a freestyle performance. According to Charlies Sloth, Jamaican has so much talent and such an “immeasurable” musical legacy that he wanted to personally introduce new performers to the world and to celebrate some of the island’s iconic superstar recording artists at the same time. Future episodes will feature Sean Paul, Zebee, Skilibeng, Runkus, and Dadd1.

MUSIC PIONEER GRAMPS MORGAN OBTAINED JAMAICAN CITIZENSHIP
Roy “Gramps” Morgan, whose album “Positive Vibration” was nominated for a Best Reggae Al-bum Grammy, has obtained citizenship in Jamaica. Born in Brooklyn, New York, Morgan was raised with Jamaican culture and said “it feels good” to be an official citizen. He thanked the passport agency and the Jamaican Consulate in helping him receive it. Morgan, the producer of Lieutenant Stitchie’s “Masterclass” album, said he was celebrating Rastafarian fashion by wearing an “original Rastaman beaver” hat in reference to the film “Rockers.” Morgan’s father, Denroy Morgan, appears on his Grammy-nominated album. Morgan formed the Morgan Heritage band in 1994 with four of his siblings. The band released 12 albums and won the Best Reggae Album Grammy in 2016 for their “Strictly Roots” album.