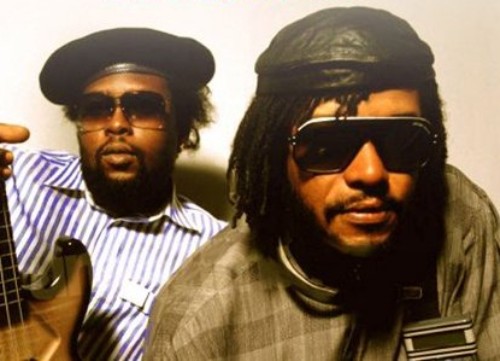 Sly Dunbar and Robbie Shakespeare both established themselves as musicians in Jamaica before teaming up in the mid-1970s. Dunbar was born May 10, 1952 in Kingston, Jamaica, and Shakespeare was born Sept. 27, 1953 in Kingston.

Dunbar was a drummer for Skin Flesh and Bones and Shakespeare was playing bass and guitar with the Aggrovators when they discovered their views on music were very similar.

They first worked together at the newly created Channel One Studio and label operated by the Hoo Kim brothers. The duo’s breakthrough album came when they provided the music for the song “Right Time” released by the Mighty Diamonds in 1976. Thereafter they were dubbed the “masters of groove and propulsion.” The album went to No. 1.

Dunbar and Shakespeare introduced the “Rub A Dub” sound in the mid-1980s and were important early innovators of computer-assisted music. The duo introduced the beat called Rockers that replaced the One Drop style. Their “Rhythm Killers” album resulted in a No. 12 hit on the UK Singles Chart in 1987. They were also responsible for the debut of a new sound with the release of “Bam Bam” that used East Indian tabla sounds.

They next tackled the sounds of dancehall and Latin music, fusing them in the late 1990s and early 2000s. The musical duo also combined dancehall and hip hop/R&B. Their “Superthruster” single in 1999 was a mainstream hit and frequently aired on MTV. Their album “Friends” won a Grammy Award in 1999.

Dunbar and Shakespeare have played for the most highly regarded Jamaican musical artists. They’ve also played and/or produced for giants in the music industry that include Bob Dylan, Mick Jagger, Madonna, The Rolling Stones, Sting, Khaled, Sinead O’Connor, and Carlos Santana.

They continue to tour and record around the globe. Dunbar and Shakespeare have produced a number of new Jamaican artists for their Taxi label and produced tracks for Brittney Spears and Paul McCartney. They’ve collaborated with rappers, singers and songwriters worldwide. Collaboration with Ecuadorian artists produced songs that charted on Latin Alternative international radio and Worldbeat.

The two received their 11th Grammy Award nomination in 2014 for “The Reggae Power” album and received the Gold Musgrave Medal in Oct. 2015 for their contributions to music. They appeared in the 2011 documentary “Reggae Got Soul: The Story of Toots and the Maytals” featured on the BBC. Their top songs include:

Star Across the Sky

Made to Fall in Love