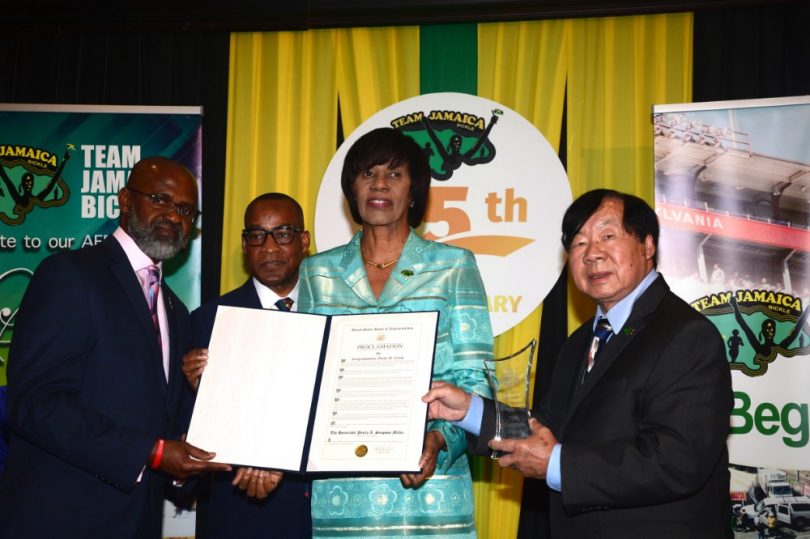 Former Prime Minister, The Most Honourable Portia Simpson-Miller, ON was presented with a United States Congressional Proclamation from Congresswoman Hon. Yvette D. Clarke of the Ninth Congressional District in New York, at the recently held Team Jamaica Bickle (TJB) 25th anniversary reception held April 1, 2019 (6:30 pm-9:30 pm) at the Jamaica Pegasus Hotel in Kingston. Under the distinguished patronage of the Governor General Of Jamaica, His Excellency, The Most Hon. Sir Patrick Allen, the evening which was appropriately themed, “Celebrating Volunteerism, Heralding Excellence,” paid homage to individuals who have positively impacted their communities and humanity through their acts of philanthropy and concern for those in need. Mrs. Simpson-Miller also received the TJB Chairman Impact award. 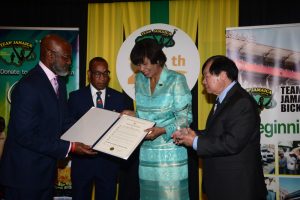 In her response Mrs. Simpson-Miller said, “I wish to express my sincere appreciation to Mr. Irwine Clare and the entire Team Jamaica Bickle family for awarding me the ‘TJB Chairman Impact Award’. I am truly honoured to have received this important Award. And as I said in my remarks on Monday evening, this is an Award which I will always treasure. My heartiest commendations to Team Jamaica Bickle on celebrating 25 years of invaluable service to our athletes, who participate at the Penn Relays yearly, who are not just from Jamaica, but the region. I was also pleasantly surprised and am very grateful to be recognized with a Citation from Congresswoman Yvette Clarke. I am honoured and deeply humbled to have been acknowledged in such a manner. I thank my sister and friend and wish for her continued success and God’s richest blessings.”

In his remarks TJB’s Chairman Irwine Clare, Snr., thanked Mrs. Simpson-Miller for her steadfast support and lauded her enviable record of ‘achievements and firsts,’ in Public Service. Mrs. Simpson Miller served for 17 years as a Cabinet Minister before her ascension to the highest office as Prime Minister in 2006. Additionally, she holds the distinction of being the first foreign Head of state and Minister of Sports to visit the Penn Relays in support of athletes from Jamaica and the rest of the region. 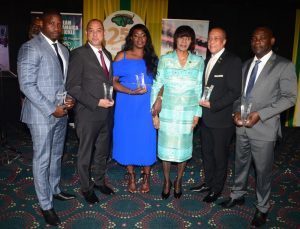 The other awardees were: Senator, Don Wehby, CD, who received the TJB Corporate Award for this successful stewardship of the Grace Kennedy Group, his involvement in the wider business community and his civic engagement and philanthropy. Dr. Walton Small, who received the TJB Leadership Award, has presided over a successful tenure of the Inter Secondary School Sports Association (ISSA), and has served as educator at various educational institutions. He currently is Principal of Wolmer’s Boys School. Sekou Clarke, Esq. was presented with the TJB Ambassador Award. As a former athlete Sekou represented his country at numerous meets before obtaining his law degree and becoming an advocate for the immigrant community and a voice for the voice-less. Trishana McGowan, was also presented with the TJB Ambassador Award. Trishana has broken through the male dominated sport scene, locally, co-hosting the ‘ground-breaking’ Girls Sports Club on RJR Hitz94. The TJB Appreciation Award was presented to Aldrick McNab. Allie (as he’s affectionately known) is a trailblazing football icon, broadcaster coach and advisor to the Minister of Culture, Gender, Entertainment and Sport.

In honoring of these illustrious citizens, the organization has further solidified its trade in social capital. It’s the foundation on which the organization is built; one that demonstrates care and concern for others.

The “TJB Journey,” was beautifully told by Ms. Carole Beckford, Lecturer and Sports Marketing Executive and perfectly wrapped up with a video, titled, ‘Penn Sizzle,’ a snazzy ninety-second production about the relays featuring TJB.

Life-time sponsor and partner to TJB Dr. Vincent HoSang spoke of the journey over the 25 years, growing from a small container window from which they served food to (now) a fully equipped commercial kitchen and seated tent and gave his commitment to continued partnership to TJB.

Scott Ward, Executive Director Penn Relays brought greetings and commended the organization on its work. He spoke of TJB’s sterling contribution to the relays over its 25 years as participating sponsor. He used the occasion to officially extend an Invitation to TJB to the Infield on Saturday April 27, when the organization will be honored at the 125th staging of the Penn Relays April 25-27, 2019. The year also marks Jamaica’s 55th year of participation.

President and CEO of Proven Wealth Limited, Johann Heaven brought remarks in his capacity of sponsor as did Ms. Trudy Chin of Caribbean Airlines who used the occasion to announce CAL as the official airline of TJB for 2019 and 2020.

About Team Jamaica Bickle
Team Jamaica Bickle, Inc. is a 501(c) (3) not-for-profit organization, based in New York, formed in 1994, under the leadership of Irwine G. Clare Sr., to provide hospitality support for Jamaican athletes who compete at the annual Penn Relays Carnival, held at the University of Pennsylvania. Team Jamaica Bickle, Inc., supports athletes, athletic and youth programs across the Caribbean and the United States. In 1999, Team Jamaica Bickle became the first Jamaican organization to be a participating sponsor at the Penn Relays. As a result, the Jamaican flag became the first foreign-nation’s flag to be flown at the Penn Relays, a distinction unmatched. Over the years, TJB has received several proclamations and awards from numerous local and national entities.