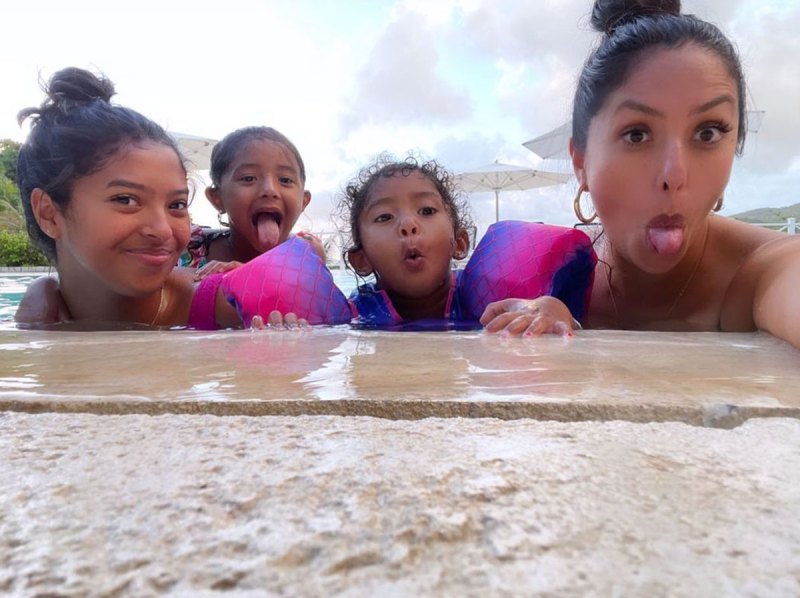 Vanessa Bryant, 39, is vacationing in Jamaica with her daughters Natalia, 18, Bianka, 4, and Capri, 2. She shared photographs from her trip on Instagram showing the family having a very good time together on the Caribbean island at the Round Hill Hotel and Villas in Hanover. Bryant joined her late husband’s family – his sister Sharia Washington, brother-in-law Jerrod Washington and their children Tayah, Sydney, and Jett – on the surprise trip. Posting alongside the photographs, Sharia wrote, “I’m not sure how she does it, but @vanessabryant pulled off another huge surprise! Family trip to Jamaica!”

Vanessa Bryant is the widow of NBA star Kobe Bryant who died in a helicopter crash with daughter Gigi in 2020.

Natalia Bryant and Sharia Washington joked about how Vanessa would “ruin” their trip. Natalia believes this to be the case because as she jokingly said in a video that her Mom “gets really irritated really fast. Washington said Vanessa could “ruin” things if she had “too many Pina Coladas.”

The photos show the family taking selfies and enjoying time at the pool. Bianka was shown enjoying the pool party, while Capri, called “KoKo,” who just two years old, made the best of her time in the pool with “floaties” and Vanessa posting that she had six months to go before she could get rid of them.

In addition to time at the pool, which has been the major focus for her daughters who love to swim and spend time in the water, Vanessa and the family have enjoyed golf at the Tryall Golf Club. They have also experienced watching the sunset at the Seaside Terrace.

Vanessa Laine Bryant, an American model, was born in 1982 in Los Angeles, California. She married basketball legend Kobe Bryant in 2001 and had four children. She attended St. Boniface Parochial School and graduated from Marina High School in Lost Angeles.

Kobe Bryant was born in 1978 in Philadelphia, Pennsylvania, and partially raised in Italy. He spent his whole professional basketball career with the Los Angeles Lakers and was viewed as one of the greatest players of the sport in history. He won five NBA championships and was named an All-Star 18 times. He was also a 15-5im member of the All-NBA Team, and twice an NBA Finals MVP. He was voted into the Naismith Memorial Basketball Hall of Fame posthumously in 2020.