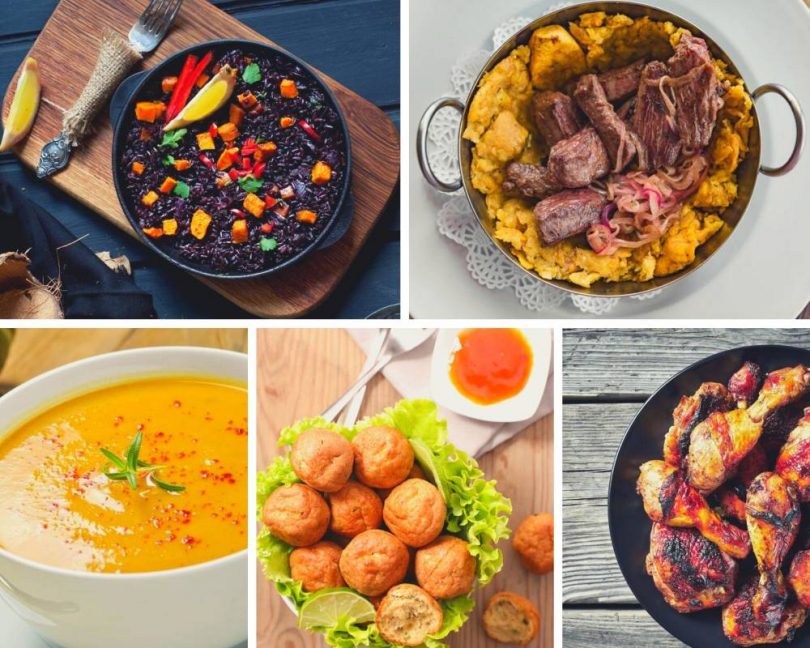 The Caribbean offers a wide variety of dishes influenced by East Indian, Asian, African, and indigenous island cultures that reflect the region’s rich history and cultural fusions. Below is just a sample of the exciting dining options awaiting visitors to the islands of the Caribbean.

1. Conch Fritters in The Bahamas 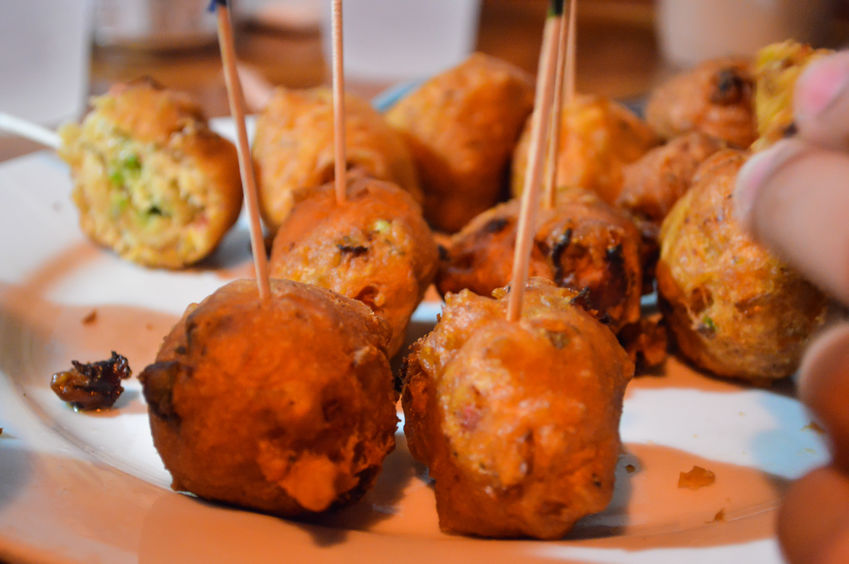 Conch is a sea mollusk that is related to the snail, and while it can be found throughout the Caribbean, it is a special favorite in The Bahamas. Conch fritters are made with shredded conch meat and a batter that may include onion, bell peppers, spices, chili, or celery. Every restaurant and family has its own recipe, so there is a variety of flavors to experience. 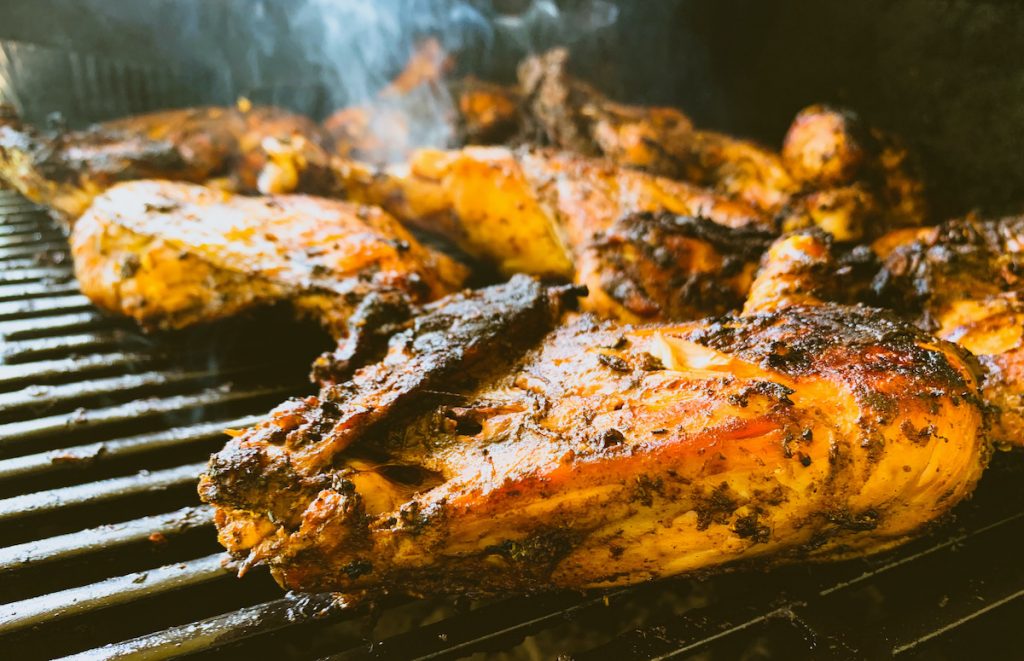 Jamaica is famous for its jerk cooking style, which involves meat seasoned with a hot and spicy mixture either as a dry rub or a wet marinade, and then, traditionally, cooked over an open fire on old oil barrel halves that have been cut lengthwise and fitted with hinges with ventilation holes for the smoke. Jerk seasoning relies on two main ingredients: allspice and Scotch bonnet peppers. It may also include cloves, cinnamon, nutmeg, ginger, garlic, and other spices. 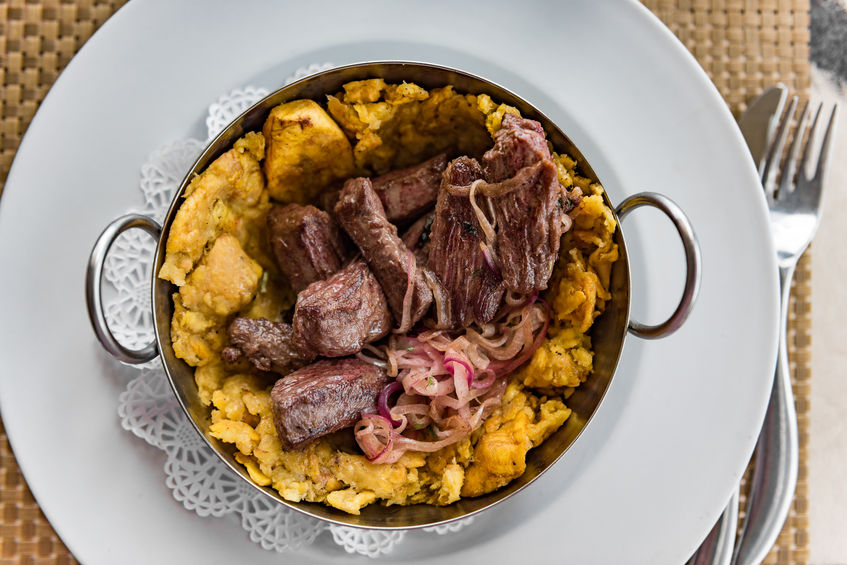 Mofongo is a dish that features mashed fried green plantains flavored with garlic and pork rinds. It is traditionally prepared with a wooden mortar and pestle and can be enjoyed as a side dish or a main dish with meat, vegetables, or chicken broth. It is a good illustration of the nation’s fusion of flavors as its roots are in Spanish, African, and Taino traditions. 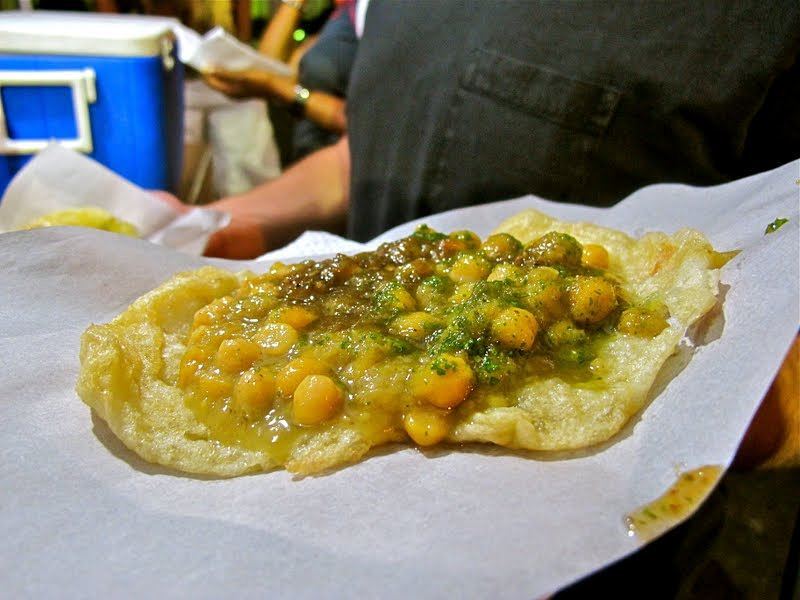 A favorite street food in Trinidad, Doubles are often eaten for breakfast. They consist of double stacks of a light, fried bread called “bara,” which are separated by a layer of curried chickpeas called “chana,” garnished with pepper sauce, tamarind chutney, or green mango pickle.

5. Cou-Cou and Flying Fish in Barbados 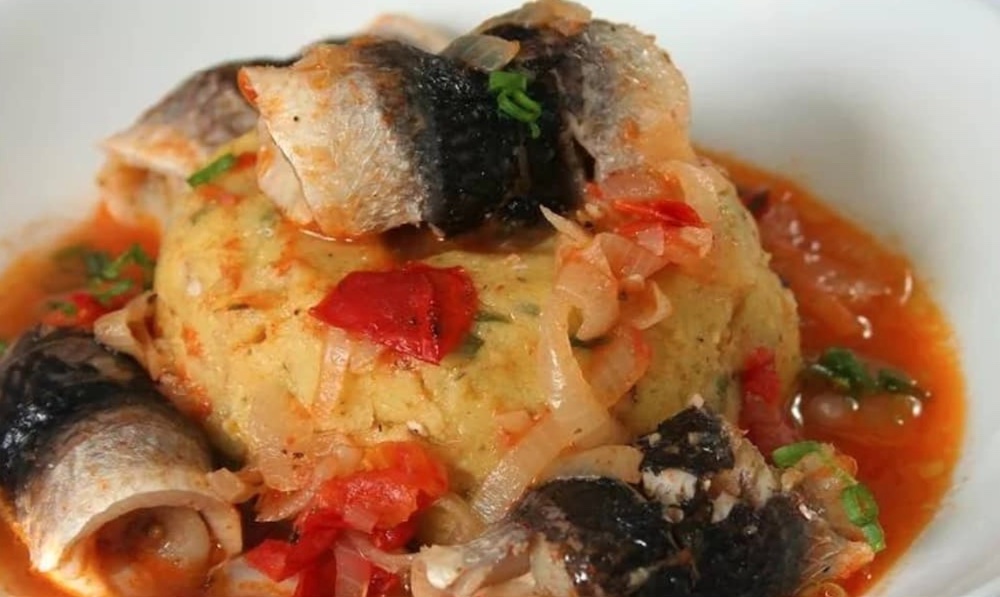 Barbados is known as “the land of the flying fish,” a type of fish that uses its wing-like fins to jump out of the water. Cou-cou and flying fish is the national dish of Barbados. Cou-cou is similar to polenta or grits but has an African origin and is made of cornmeal and okra. The flying fish is traditionally marinated in a mix of onion, garlic, thyme, parsley, and other herbs, and then steamed or fried. It is usually served with a tomato and hot pepper sauce.

6. La Bandera in the Dominican Republic 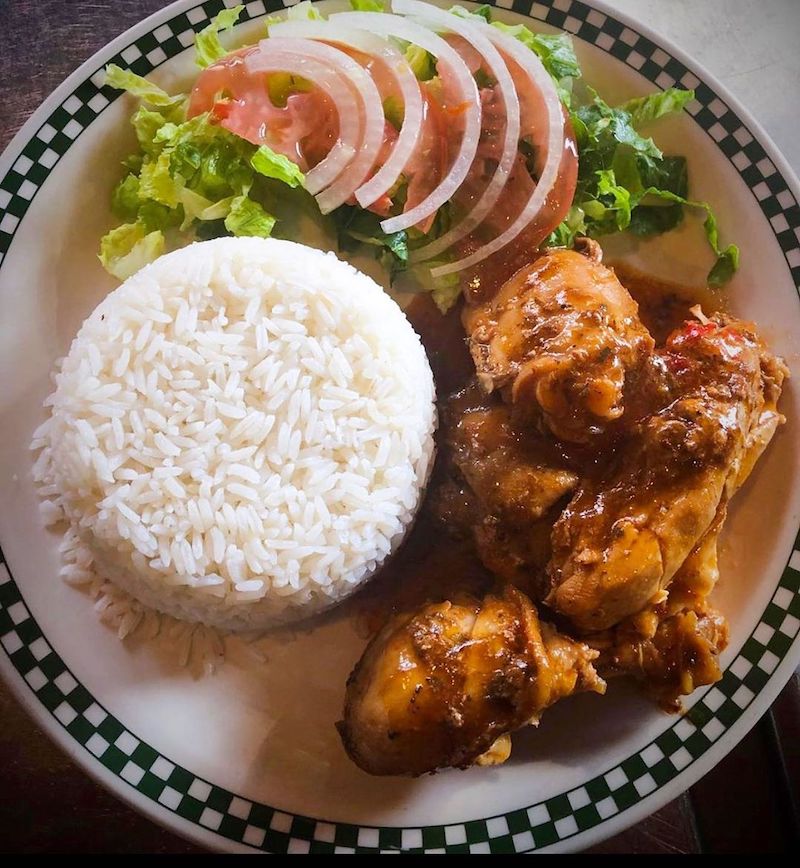 La Bandera, which means “The Flag,” is a hearty and colorful dish of rice, red beans, chicken, and salad. It is a favorite lunch of working people and is often served with a side of tostones, or fried green plantains. 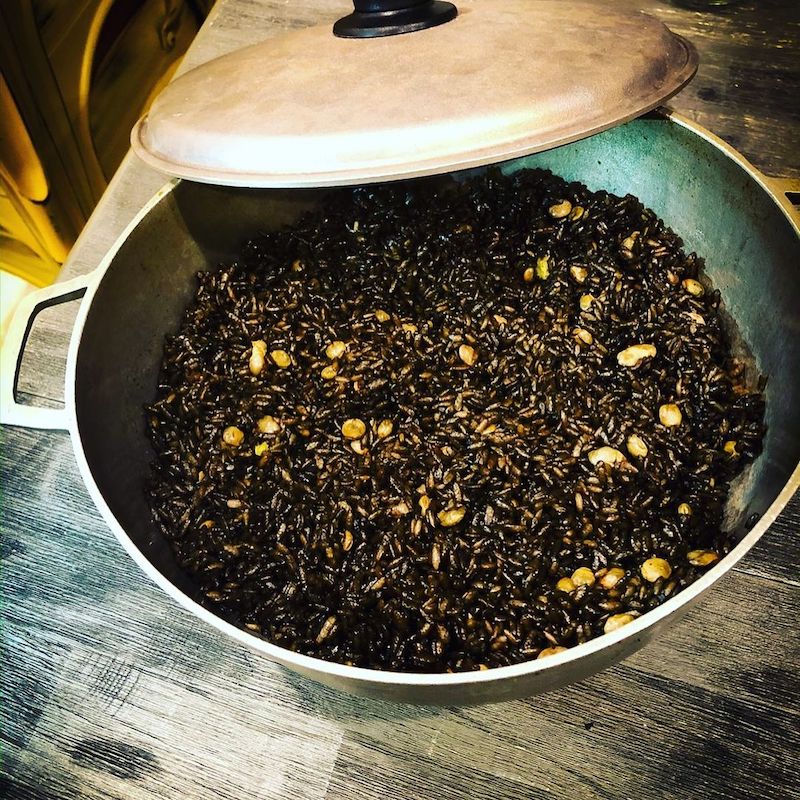 This is one of the most unique and extravagant dishes served in Haiti. The English translation is “black rice” or “black mushroom rice.” “Djon” is the Creole word for fungus and refers to various mushrooms found in northern Haiti. While similar mushrooms can be found in other Caribbean regions, the Haitians are the only people to feature them as an ingredient in their cuisine. 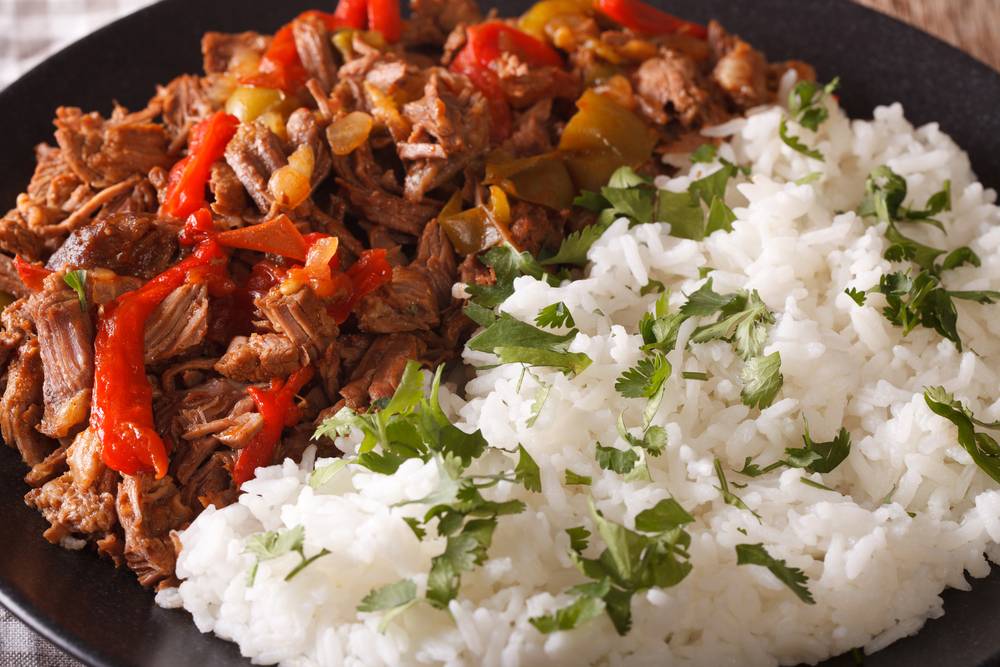 This dish features shredded beef cooked in tomatoes and served over rice. “Ropa Vieja” means “old clothes,” and the dish is so named for its appearance, which has been likened to a pile of old clothes. In addition to the beef and tomatoes, the dish may include peppers, onions, olives, garlic, and other flavorful spices.

9. Fungee and Pepperpot in Antigua and Barbuda 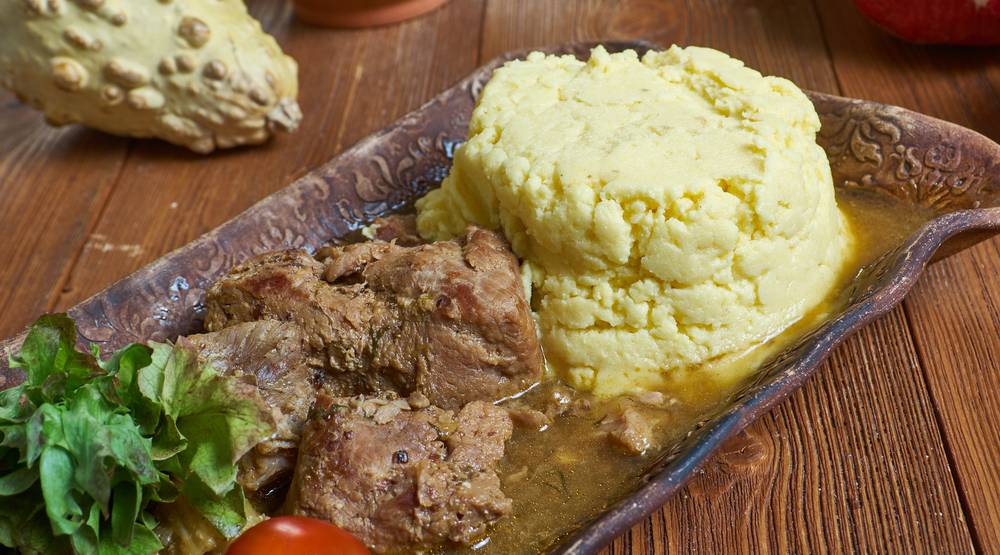 This meal consists of cornmeal cooked with okra and served with a rich vegetable stew made of spinach, onion, salted beef, pig tail, and spices. 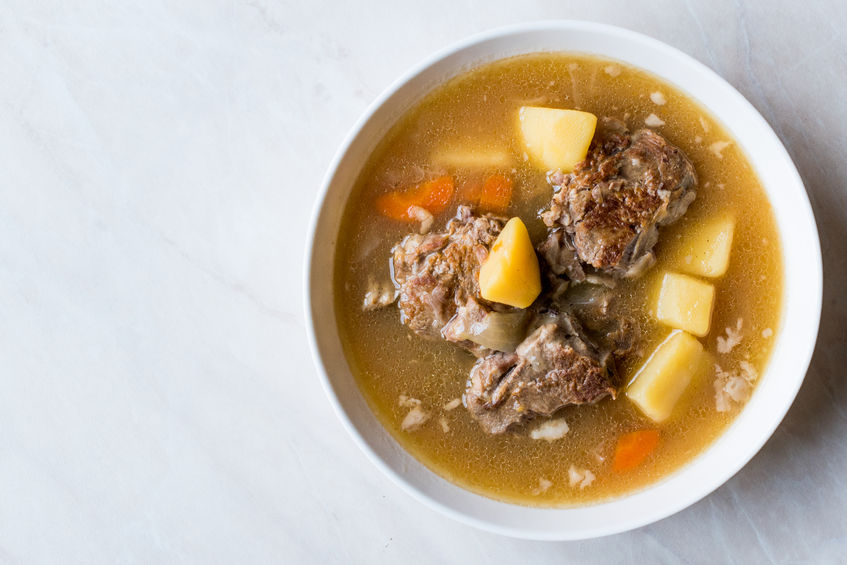 While the name may be strange, the dish is a pleasing mix of stewed goat meat combined with vegetables like onions and tomatoes, spices, and sometimes green papaya and breadfruit. It is served with rice or bread and is similar to an Irish stew. 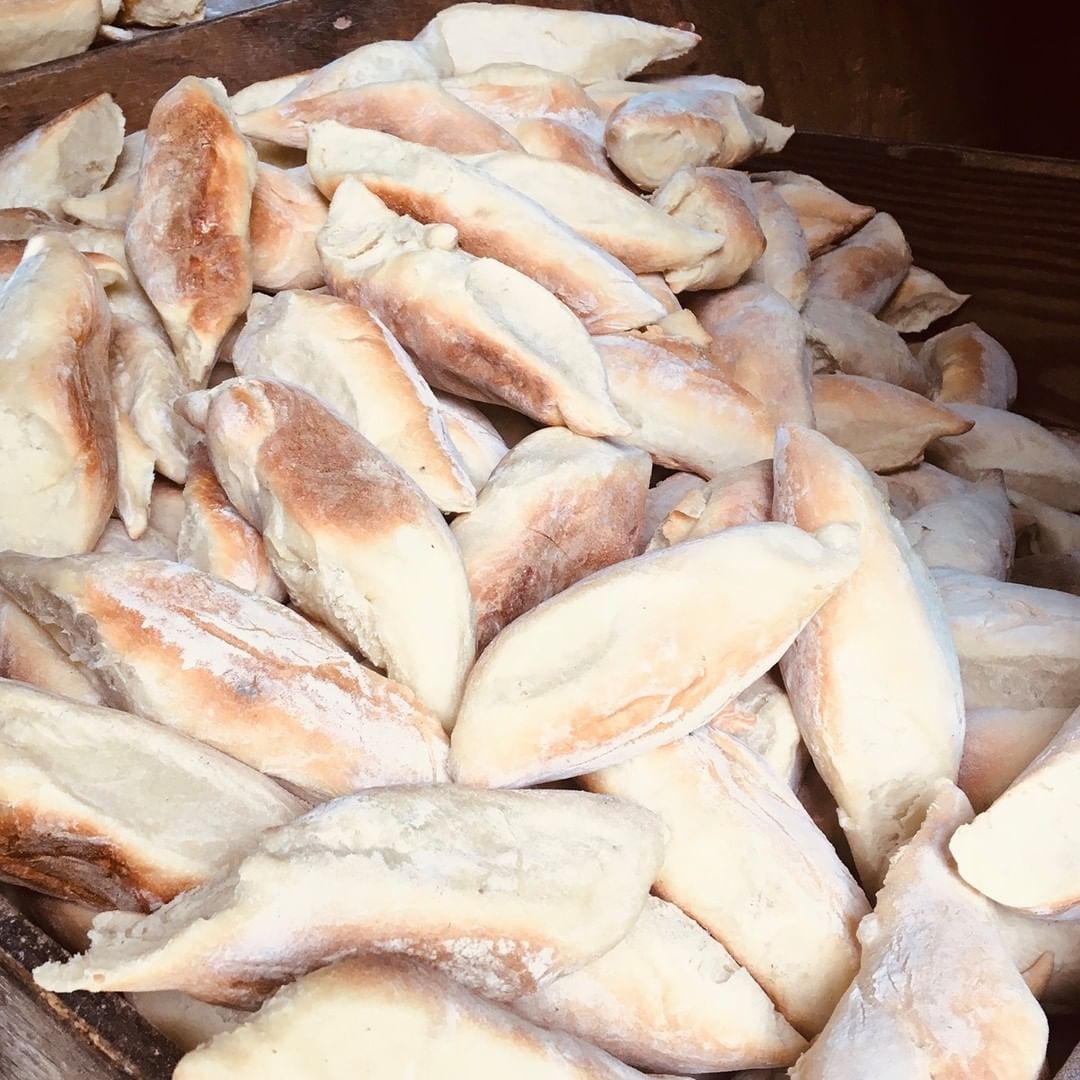 This local treat can be found in many of St. Lucia’s family-operated bakeries. The loaves have a soft crust and are shaped like short and skinny baguettes. They are baked in wood-fired ovens and are imbued with a delicious, smoky flavor. 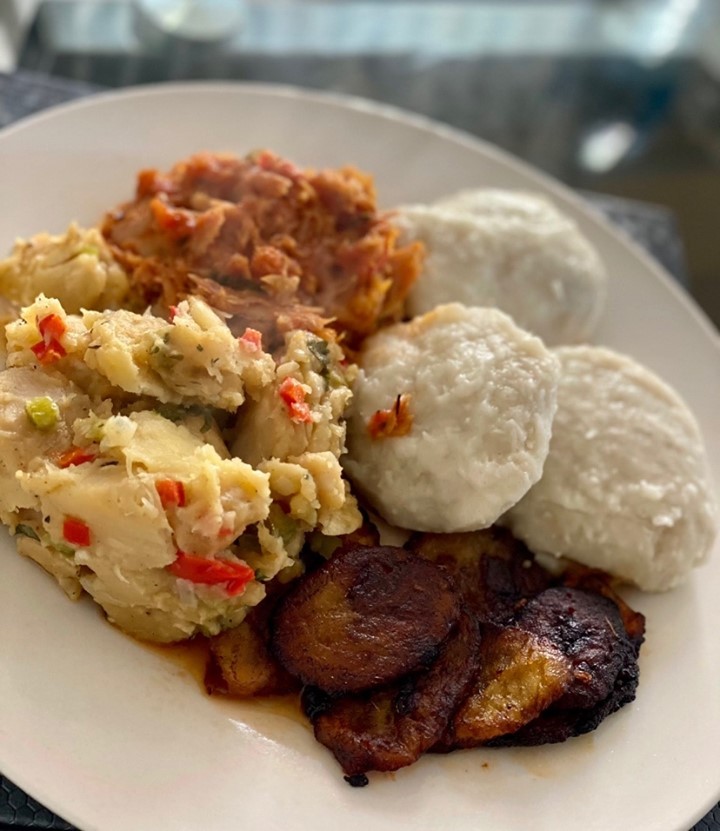 Dining on seafood is a must in the Caribbean, and this dish, served with dumplings, spicy plantains, and breadfruit is one of the best choices in St. Kitts. A hearty and filling stew, it is a stand-out among Caribbean stews for its inclusion of fish, breadfruit, spiced plantains, and coconut dumplings. The colorful dish also makes a unique presentation. 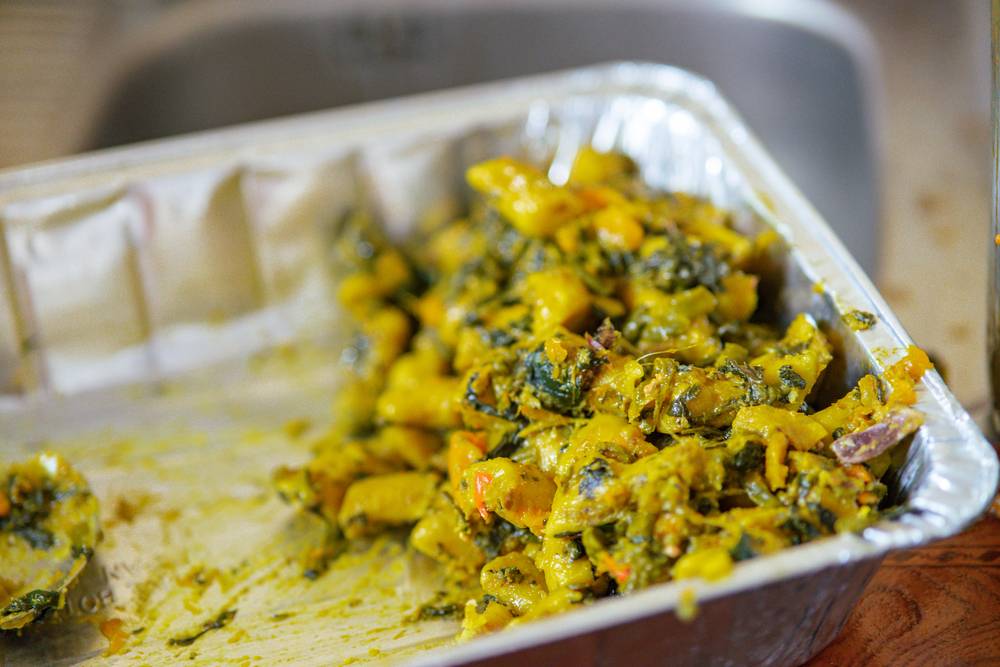 Oil Down is the national dish of Grenada. It is a savory and hearty stew made with chicken and dumplings, which takes its name from the oil exuded by the coconut milk it contains as it cooks. 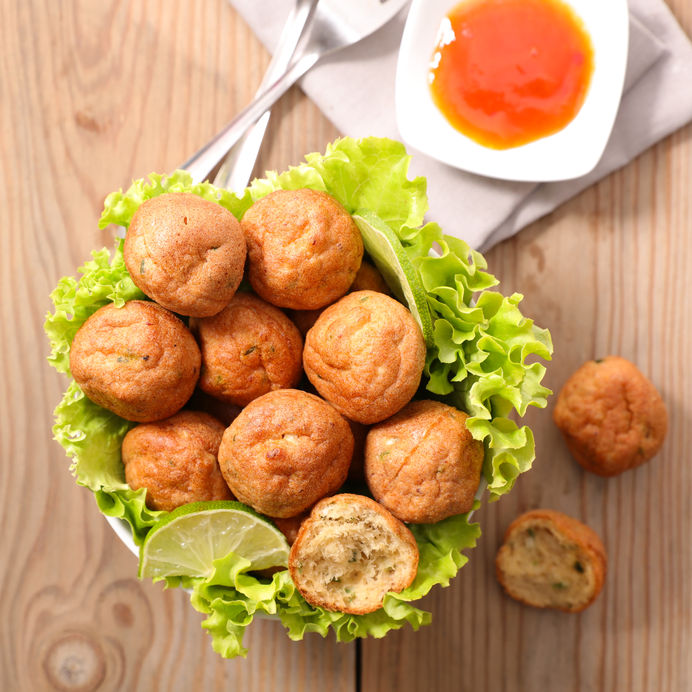 Accra is a fritter that can be found throughout the Caribbean, but has a special preparation in Martinique where it is made from salt fish, prawns, or vegetables. The fritters on this island – called “accras de morue” in their full name – feature a batter centering on the main ingredient of salt fish mixed with spices. They are frequently served as a snack or appetizer.

15. Callaloo Soup in the US Virgin Islands 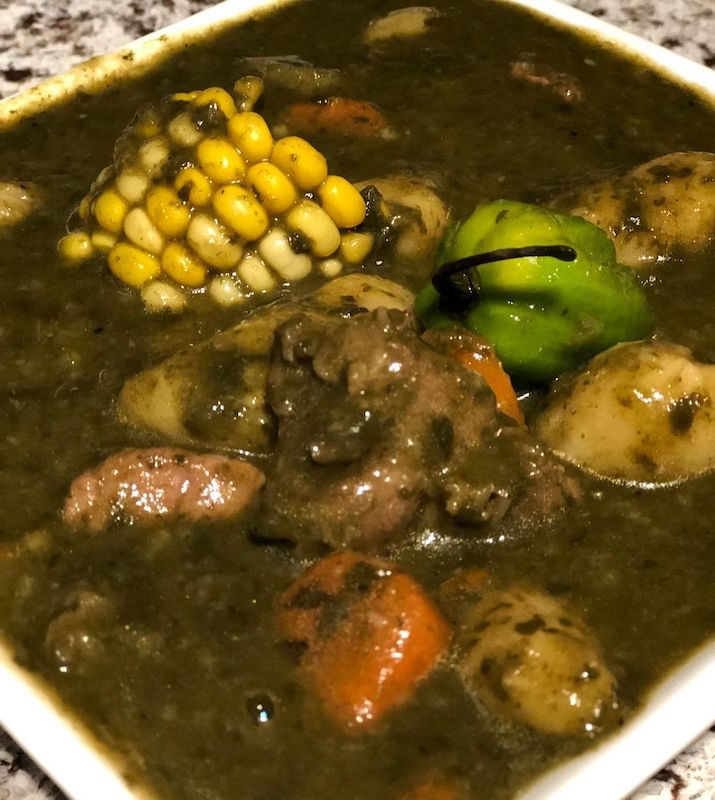 This is a traditional soup prepared with the leaves of the dasheen plant. Other leafy greens are sometimes substituted for the dasheen and may include taro or spinach. The soup is flavored with salted meat, okra, hot peppers, fish, onions, and spices. It is similar to the gumbo served in Louisiana gumbo. This recipe for this popular dish originated in West Africa and is often served with mushrooms. 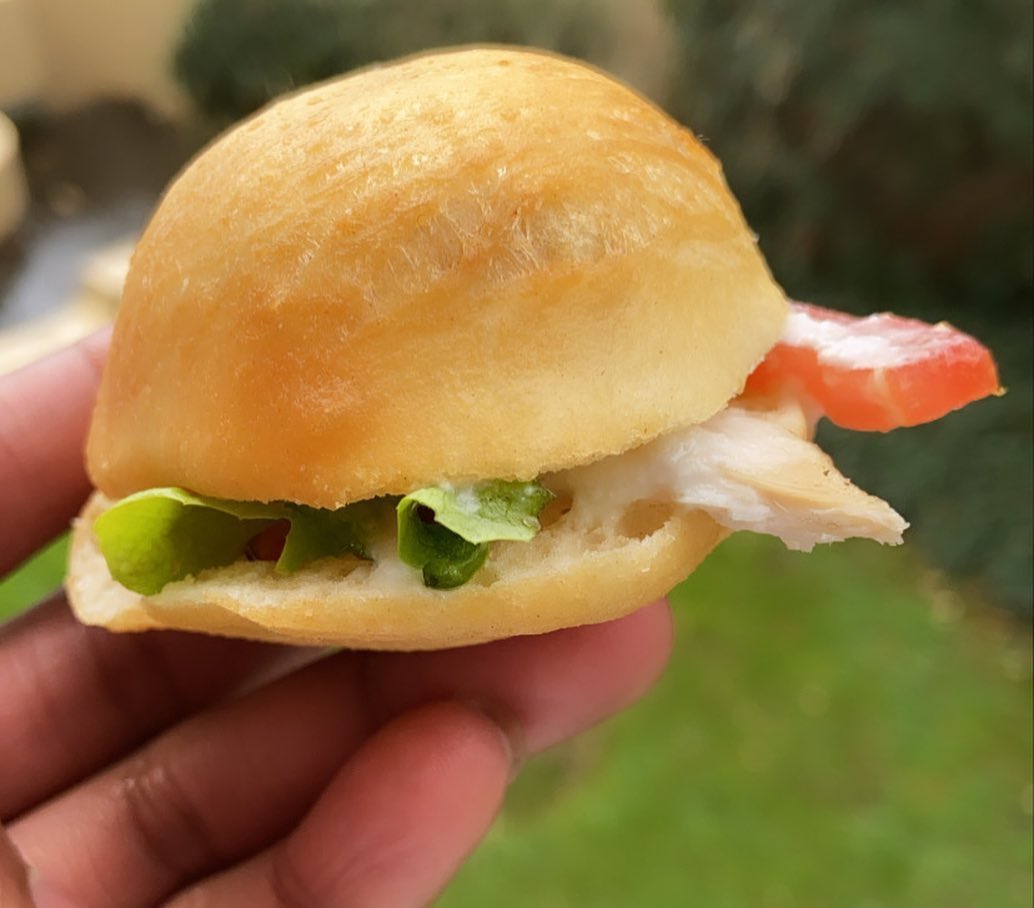 Bokit is sold from street stands throughout Guadeloupe. It takes its inspiration from johnny cake and dates to the middle of the 19th century following the abolition of slavery when the poor searched for a cheaper alternative to a regular sandwich. It is made of two pieces of fried dough stuffed with meat and cheese and served with a vinegar sauce. Each bokit stand has its own version of the dish, which sometimes includes a spiced mayonnaise prepared with curry powder or fresh fish. Bokit is often eaten for lunch or as a late-night meal. 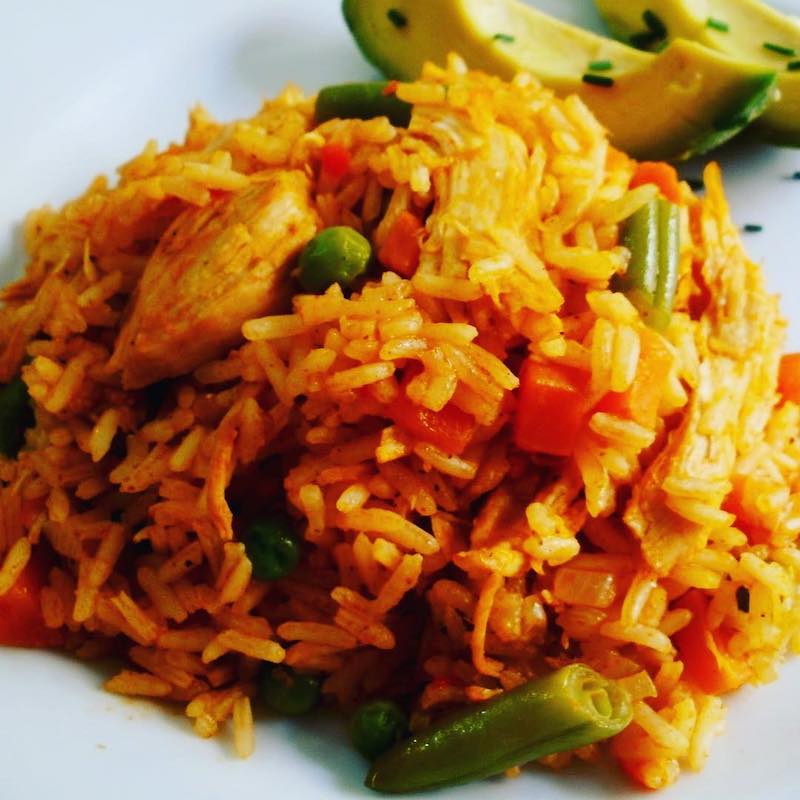 This simple food is the national dish of St. Martin. It is made with rice and chicken in a single pot, which allows all its flavors to combine in a delicious way. The recipe originated with the Dutch people who settled on the island. The ingredients include boneless chicken, garlic, thyme, celery, onions, cabbage, brown sugar, and tomatoes and served with hot sauce. The vegetarian version of the dish is also popular on the island. 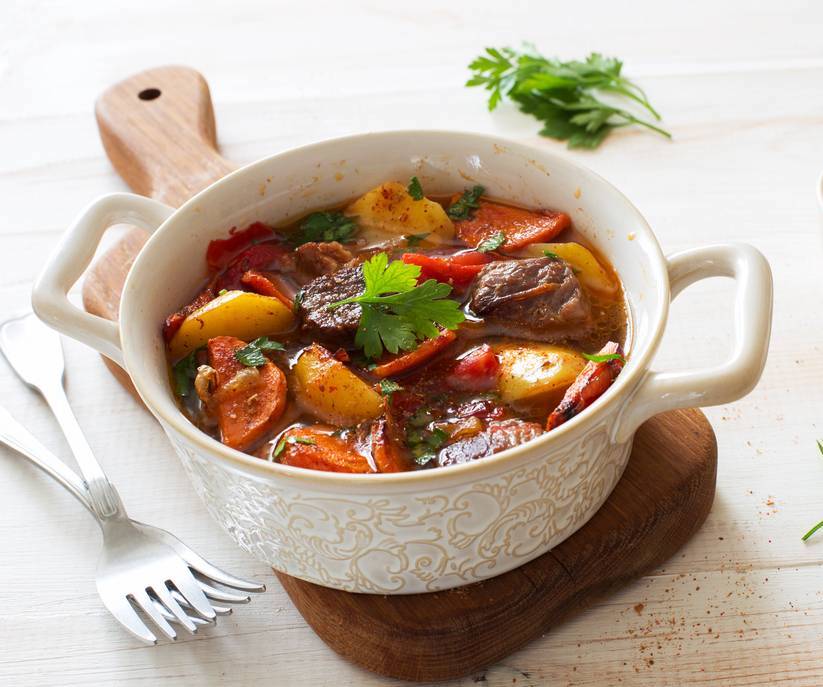 Turtle stew is the national dish of Grand Cayman. While similar to the beef stew prepared in the United States, it uses turtle meat and cassava, along with onions, potatoes, and peppers. The dish dates back to the 17th century when it was a common farming practice to raise turtles for meat. 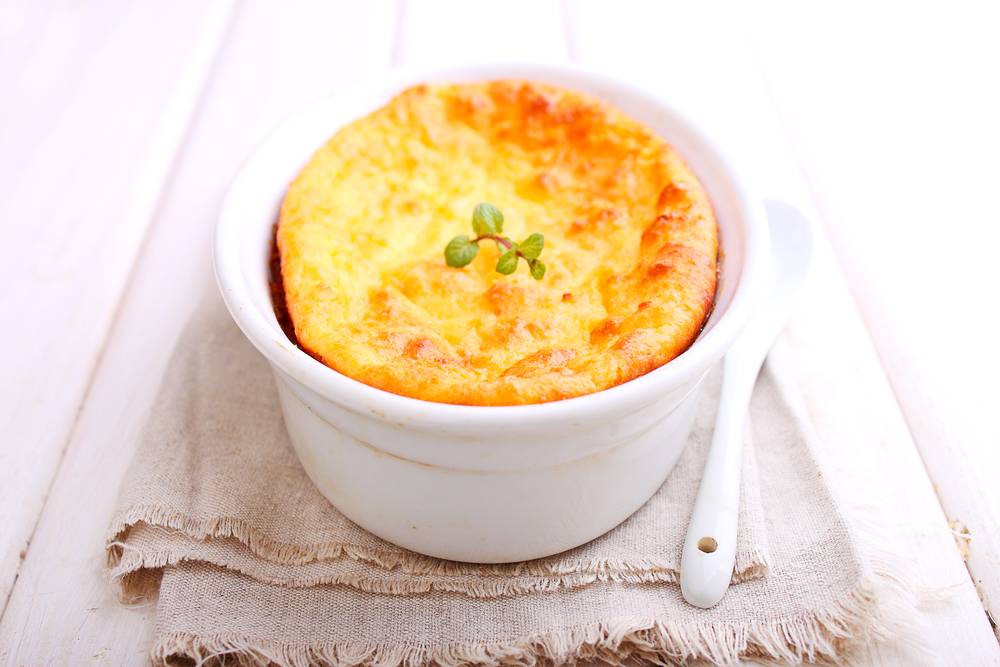 Curacao’s national dish, this dish is made with gouda or Edam cheese stuffed with meat – usually spiced chicken – combined with olives, capers, onions, and tomatoes. The ingredients are combined and then baked until the cheese melts. It may date from the days of the slave trade on the island when workers in kitchens would eat leftover cheese rinds stuff with discarded pieces of meat. 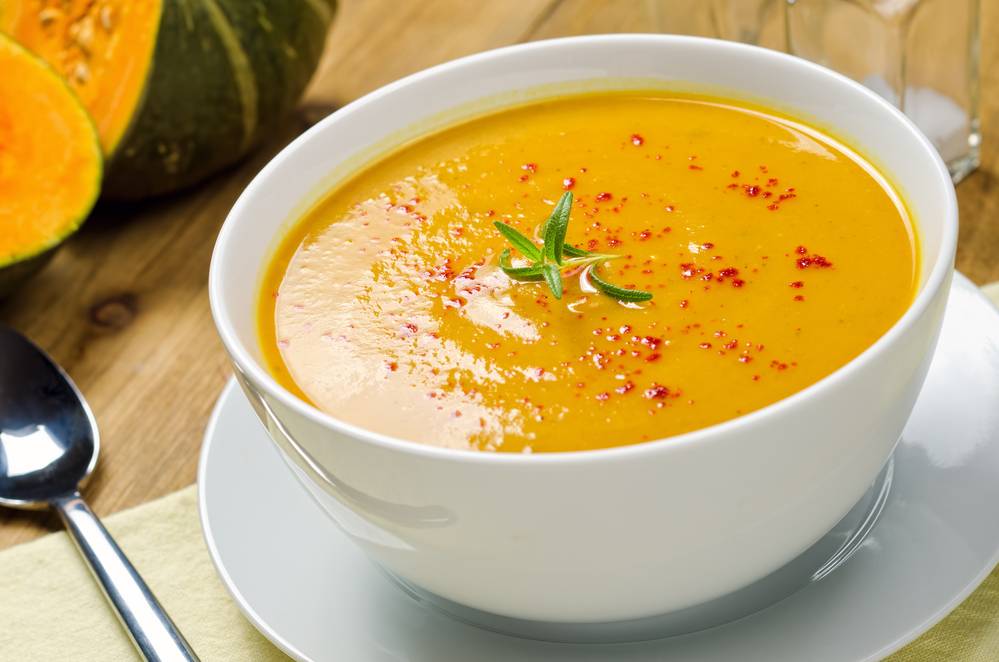 Sopi di Pampuna, or pumpkin soup, can be found in many restaurants in Aruba. It has a deep orange color that comes from the seed of the annatto tree, which is known as Ruku. The seeds are heated in a cup of hot oil, which is left to stand until the oil absorbs their color. The seeds are discarded and some of the oil is added to the soup’s pumpkin base to make a beautiful and tasty dish. 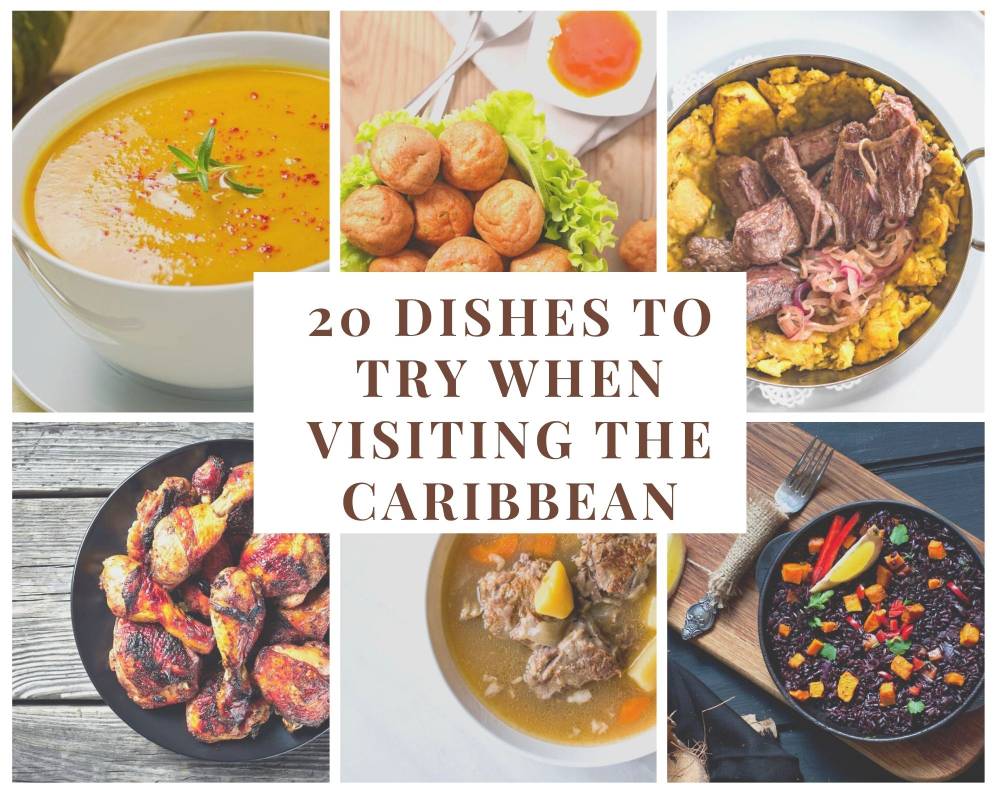