5 Reasons Jamaican Culture Is the Most Popular in the World - Jamaicans.com Every Jamaican who has traveled abroad has experienced the true meaning of the phrase “likkle but tallawah”. For a country of our size, we are enormously popular and the rest of the world can’t seem to get enough of our culture. From a deep fascination with sports stars to our music and food, check out these five reasons Jamaican culture is among the world’s most popular.

1. Jamaican Patois – People all over are intrigued by Jamaican patois. Thanks to our talented and creative reggae artists, people on every continent are exposed to our expressive language. The colourful blend of English with Spanish and ancestral African languages stir intrigue and curiosity and many people want to talk like us to get a little piece of the Jamaican culture.

2. Our captivating music – Thanks to the trend set by the late great reggae icon Bob Marley, reggae music is blaring through speakers on every corner of the globe. More than three decades after Marley’s death, reggae remains an influential force behind several other genres, and today, reggae is regularly infused in the work of many popular international artists.

3. Our irresistible food – Whether it’s the world famous Blue Mountain coffee or spicy jerk chicken, our food is well known worldwide. It’s no secret that Jamaican coffee is one of the best tasting in the world. And with Jamaican food being increasingly featured in travel and destination media outlets, even ordinary Jamaican foods, like the patty, are gaining increasing popularity overseas.

4. Our athletic dominance – Jamaica has always been a force to reckon with in the athletic world, but in the last decade, the world has taken notice of our dominance on the track. With the phenomenal success of the Jamaican track team including the legendary Usain Bolt, many people have become attracted to our culture and want to go beyond rocking to reggae music in the stadium stands to getting to know more about the country and its people.

5. Our creative dances – We’ve been inventing dances for decades ever since the first Jamaican set foot in a dancehall. Jamaican dance videos are popping up all over the internet, and people all over the world are eagerly imitating our moves. Not only do we have a dance move for everything but the passion with which we express ourselves is something that people far and wide find hard to resist. 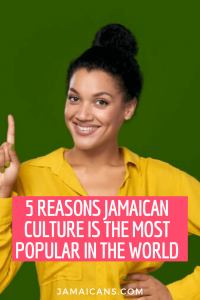