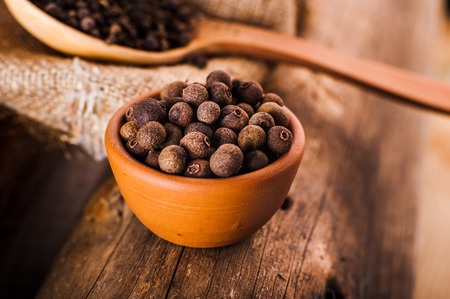 Jamaican cuisine is an adventure for the palate due to the mixture of herbs and spices used in cooking. It is this combination of seasonings that brings the unique flavour that so many people enjoy in Jamaican food.  Here are the top 6 Jamaican seasonings and their various uses. Be sure to try some of them in your cooking. Jamaican scotch bonnet pepper can be traced back to Central and South America from as early as 1736. It is used heavily in local cooking, added to dishes such as escoveitched fish, peppered shrimp, jerk, curried goat and oxtail. Scotch bonnet pepper adds to the savoury taste of jerk sauces and gravies. The green unripe pepper is also used for recipes such as rice and peas, ‘fish tea’, ‘mannish water’, and soups. A significant part of local is the Jamaican escallion, known in the country as ‘skellion’. It is commonly sold with Jamaican garden thyme as the flavours complement each other when combined. The spice originated in China, but is now extensively grown in St. Elizabeth parish. Dishes such as rice and peas and curried foods are not complete without the addition of Jamaican scallion, which is also popular for marinating meat overnight. Thyme is a widely used herb with several cooking applications. It has its origin in Southern Europe and the Mediterranean and is now grown in several of the island’s parishes. Used fresh or dried, thyme can be added to various soups, stews and vegetables, producing an earthy taste that enriches the flavour of the dish. The leaves can be chopped and added to the pot, or the sprig of thyme can be cooked as a whole and then removed from the pot before serving.