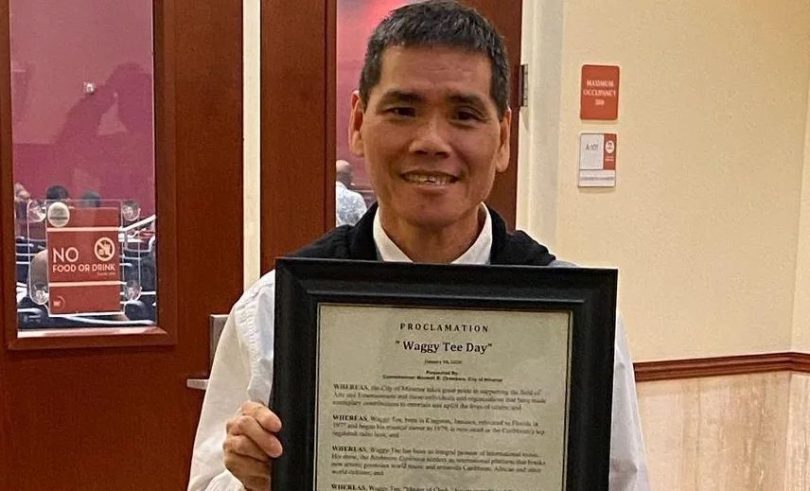 The City of Miramar in Florida has proclaimed January 18 to be Waggy Tee Day in honor of the legendary Waggy Tee, a sound system operator and radio deejay who has had a leading role in promoting, playing, and advocating for reggae, dancehall, and world music. Waggy Tee deejays on 99JAMZ, the top spot for hip-hop and R&B in Miami. Waggy Tee Day came about with the support of Miramar City Commissioner Maxwell Chambers and Mayor Wayne Messam.

The proclamation noted Waggy Tee’s recognition from the Recording Industry Association of America (RIAA) and other professional music industry stakeholders and companies, along with the praise he has received throughout his career as a deejay and radio personality. He has won awards for his spins and for the impact he has had on recordings by artists like Sean Paul, Shaggy, and others. Described in the city’s proclamation as a humble and quiet man, it went on to mention his 24 years on regulated radio, using his position to promote both new and seasoned artists. He was also cited for bringing along other now influential deejays, such as Scotch Centrix, Bad Boy Rue, and Diego Don. He has also aligned, both on and off the air, with Patrick Ewing and Lazah to promote reggae and dancehall music around the world.

Andre Chue Sang, who has been known as a trailblazing sound system operator and deejay for some 40 years by his professional name of Waggy Tee, was born in Kingston, Jamaica, and came to South Florida in 1977 when reggae was relatively unknown there. He remembers that it was difficult to get reggae played on radio and in the clubs in Miramar in the 1970s and 1980s, so he and his associates held their own jam sessions in banquet halls and country clubs in nearby Miami and Fort Lauderdale.

He hosted The Bashment Explosion on WEDR 99 Jamz for more than two decades, airing root-reggae and dancehall for two hours beginning at midnight on Fridays. Today, most of the area’s clubs and radio mix shows include a reggae dancehall set. Waggy Tee helped to expose South Florida to dancehall songs during the time when New York City served as the hub of the genre. Now, South Florida is home to a number of dancehall producers, including Rvssian; Walshy Fire, and Izy Beats. He noted that reggae is still now getting its due in terms of airtime on the radio across the United States, however.

A dedicated supporter of reggae and dancehall genres, Waggy Tee is continuing the legacy of Chinese-Jamaicans in reggae, joining the ranks of producers such as Leslie Kong, Vincent and Pat Chin, the Hoo Kim brothers, and Byron Lee.

See our interview 9 Things You Did Not Know About DJ King Waggy Tee.