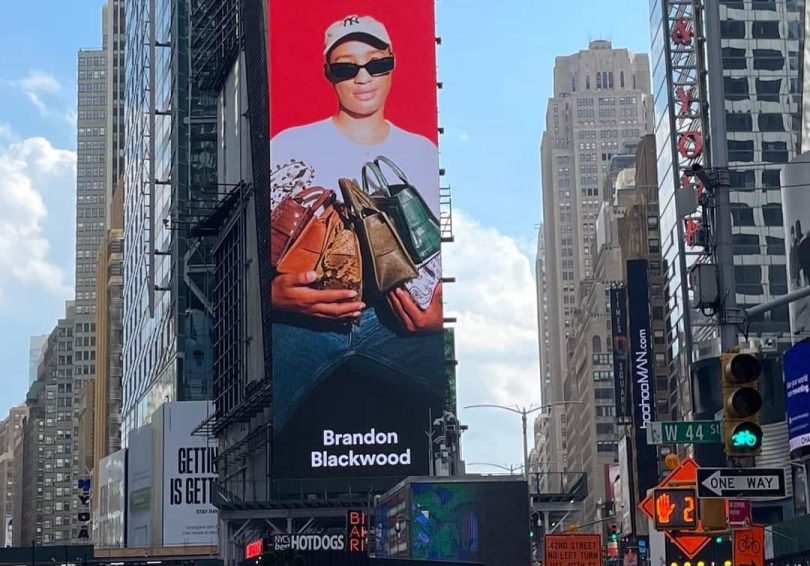 The Jamaican American designer, Brandon Blackwood, was featured on a billboard in Times Square in New York City. The designer, who rose to fame in 2020 with his ESR purse, is on Spotify’s billboard advertisement with the words “Fashion Forward” and “Playlist Takeover.” The ad includes a depiction of Blackwood holding five of his signature handbags.

Prompted by Floyd’s murder at the hands of police and the widespread anger and protests that broke out, Blackwood, who had been marketing his handbags for some time, added the phrase, “End Systemic Racism” on the front of the tote in place of the usual company name. The ESR tote became a best seller for the Brandon Blackwood brand as consumers grew more aware of the kinds of companies they support with their dollars. In 2020, there was a trend to choose brands that valued racial, gender, and financial equality. All such brands experienced significant financial growth in 2021, as well as considerable attention from the fashion industry, which wants to align with these values. 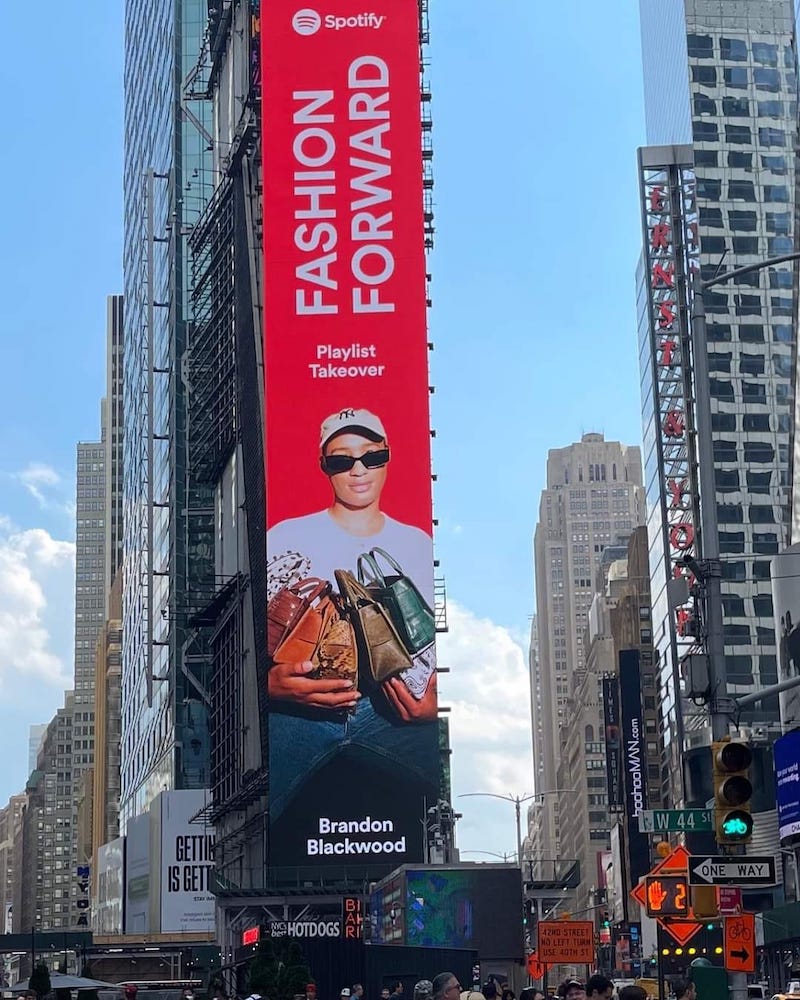 Brandon Blackwood, 29, who is of Jamaican and Chinese descent, was born in Brooklyn, New York, the oldest son of Carleen Haughton, who moved to Brooklyn from Kingston, Jamaica, at the age of 16. The designer spent much of his childhood in New York City and Tokyo. He had been attracted to the field of fashion design from an early age and made handbags for his friends during his middle school and high school years. While his family expected him to pursue a science career, and while he initially majored in neuroscience at Bard College, he graduated with a degree in American Studies after changing his major. During college, he worked as an intern at Elle and Nylon magazines, and following graduation, he was employed at Crossroads Trading, purchasing and selling trendy second-hand clothing. The stylists and editors he came to know through Crossroads Trading encouraged him to become a professional designer. With savings and help from his mother, he launched his first handbag line in 2015, and they were featured in Essence, Elle, and Galore magazines.

His desire to make a stand against racism and in support of the Black Lives Matter movement prompted him to create the now-famous mini-tote with its engraved “End Systemic Racism” quote on the from. A percentage of the proceeds of the tote’s sales were donated to the Lawyers’ Committee for Civil Rights Under Law, an organization that helps racial and ethnic minorities obtain legal representation in civil rights cases. Commenting on the creation of the mini-tote, Blackwood said he wanted to use his solid following of fans to make a product that would directly confront systemic oppression. Just 509 of the ESR bags were made in the beginning, but thousands have been sold to date.

Blackwood’s handbags are popular with many celebrities, including Lupita Nyong’o, Brie Larson, Amandla Stenberg, Cardi B, Zoe Kravitz, Solange Knowles, Keke Palmer, and Kim Kardashian. One of his totes was worn in a music video, “Fast (Motion,” by the American rapper Saweetie. Additionally, the song “Bag (Brandon Blackwood)” was released in 2021 by the hip-hop duo Trill Dollar.