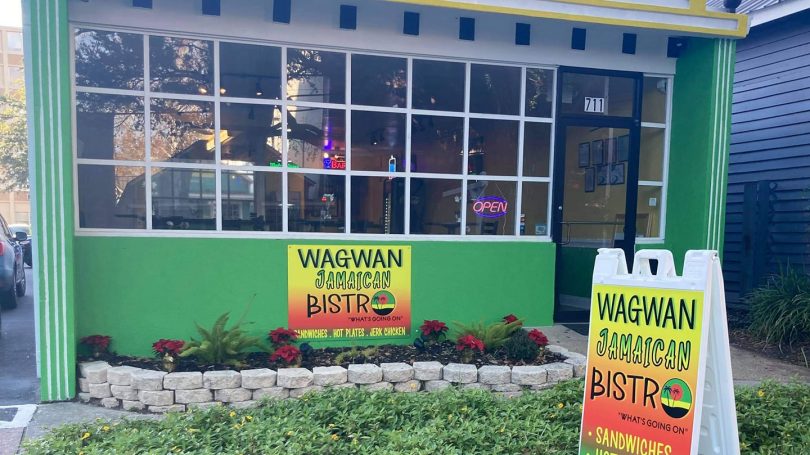 The new Wagwan Jamaican Bistro in Ocean Springs, Mississippi, offers a menu of classically authentic Jamaican cuisine. “Wagwan” is a Jamaican phrase meaning “What’s going on?” and in the restaurant of the same name, what’s going on is spicy, satisfying comfort food prepared by owners Kelvin and Marcia Isaac, who opened the bistro at the beginning of December 2020.

Kelvin Isaac has considerable experience as a professional chef and worked as the executive chef at Maison De Lu across the street from his new bright-green-and-yellow bistro. While Kelvin is a native of Mississippi, Chef Marcia Isaac comes from Jamaica.

The two-page menu at Wagwan Jamaican Bistro offers six appetizers, including the savory Jamaican beef patty consisting of ground beef inside of a flaky pastry. The Isaacs also serve an innovative combination of Mexican and Jamaican flavors in their Jerk Chicken Nachos. Among the favorites on the appetizer menu are the Jerk Chicken Wings. A selection of Jamaican-inspired sandwiches is available, and notable among them is the Wagwan Burger made of ground veal and beef with grilled pineapple, house-made Wagwan jerk sauce, smoked applewood bacon, and traditional burger toppings.

The eatery features seven entrees, with the Braised Oxtail a bestseller. The oxtails are cooked until they fall apart and are served with a rich gravy and Jamaican rice and peas. The traditional dish of Curried Goat is served with a choice of rice and peas, rice, or mashed potatoes, while the Brown Chicken Stew is a flavorful combination that also features a very good gravy. The dishes are incredibly filling, but Wagwan offers both small and large portions of the entrees.

The Wagwan Jamaican Bistro is located at 711 Washington Avenue in Ocean Springs. It is open from 11 am to 3 pm and 4 pm to 8 pm Tuesday-Saturday, 10 am to 2 pm Sunday.