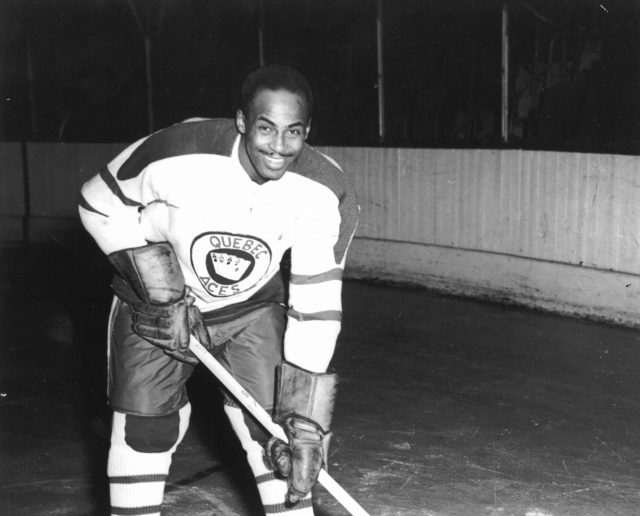 National Hockey League (NHL) writer William Douglas announced on June 28, 2022, that Herb Carnegie, a player of Jamaican heritage, will be named to the Hockey Hall of Fame Class of 2022. Carnegie is considered by a number of hockey historians as the best Black player who never played in the NHL. Carnegie played his last game some 68 years ago, and his recognition by the Hockey Hall of Fame is the result of a long effort that included editorial campaigns, petition drives, and the advocacy of current and former players. The other Black players in the Hall are Grant Fuh, Angela James, Willie O’Ree, and Jarome Iginla.

In the Douglas article, Anthony Steward, a Canadian hockey analyst who played 262 games in the NHL from 2005 to 2012 for several teams, was quoted as noting Carnegie paved the way for many players, including Val James, Mike Marson, Anson Carter, and Wayne Simmonds, in addition to Steward himself.

According to Douglas, the filmmaker Damon Kwame Mason interviewed Carnegie shortly before his death in 2012 for a documentary he was making on the history of Black hockey entitled “Soul on Ice: Past, Present & Future.” Mason told Douglas that the inclusion of Carnegie in the Hockey Hall of Fame is the “most important induction” in terms of Black hockey history because it represents, at last, an honor due to one of the sports’ pioneers in making hockey more diverse, equitable, and inclusive. It also acknowledges Carnegie’s pain at not being able to fulfill his NHL dream.

Herbert Henry Carnegie was born in 1919, and his career as a hockey player began in with the Toronto Young Rangers in Canada in 1938. In 1950, he played for the Buffalo Ankerites, a mines league team that played in mining towns in Ontario and Quebec. He played in the semi-professional Quebec Provincial League from 1944/45 to 1947/48, being named the Most Valuable Player in 1946, 1947, and 1949. He was given the opportunity to try out for the New York Rangers team in 1948 and offered a contract to play in the minor league system organized by the Rangers, but the contract totaled $2,700, less than what he was making in the Quebec league, and he turned it down. He returned to Canada and played in the Quebec Senior Hockey League for Sherbrooke St. Francis and the Quebec Aces before playing one season with the Owen Sound Mercuries in the Ontario Senior Hockey Association. Carnegie’s experiences as a Black hockey player in the 1940s and 1950s exposed him to racism, which some believe may have been the reason he was kept out of the NHL.

Carnegie retired from hockey in 1953 and launched the Future Aces Hockey School, one of the first in Canada. He tried to encourage respect, diversity, and sportsmanship among young people by writing the “Future Aces Creed” in 1954. He established the Herbert H. Carnegie Future Aces Foundation in 1987 to provide bursaries for institutions of higher learning. Carnegie had a successful career as a golfer after his retirement from hockey, winning the Canadian Seniors Golf Championship in 1977 and 1978 and the Ontario Senior Gold Championship in 1975, 1976, and 1982. He also had a business career as a successful financial planner with the Investors Group. His biography, “A Fly in a Pail of Milk: The Herb Carnegie Story,” was published in 1996.

Carnegie received numerous honors and awards throughout his life, including the Queen’s Silver Jubilee Medal in 1977, the Ontario Medal for Good Citizenship in 1988, the Metropolitan Toronto Canada Day Medal in 1990, the 125th Anniversary of the Confederation of Canada Medal in 1992, the Queen’s Golden Jubilee Medal in 2002, and the Queen’s Diamond Jubilee Medal in 2012. He received the Order of Ontario in 1996 and the Order of Canada, the nation’s highest civilian award, in 2003. In 2005, the North York Centennial Center was renamed after him in his honor. He received an Honorary Doctor of Laws degree from York University in 2006, and there is a public school in York Region named for him. He was inducted into Canada’s Sports Hall of Fame in 2002 and the Ontario Sports Hall of Fame in 2014.