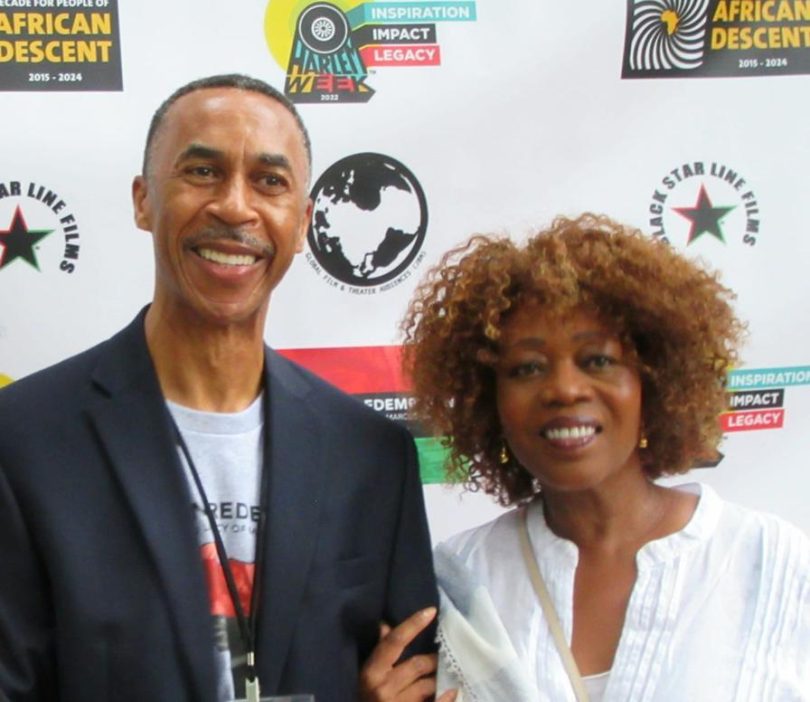 A renewed effort to mobilize support for a presidential pardon for Jamaica’s first national hero is now in effect after recently re-launching during the anniversary birthday week of Marcus Mosiah Garvey.

Jump-started by Pulitzer prize winning author Karen Hunter, the movement was resuscitated after the first Black president of the USA failed to respond to the mostly-Jamaican-led campaign that called for the exoneration of the Pan-African proponent who was charged with mail fraud, imprisoned and deported to his birthplace.

Prior to the Aug. 17 birth date, Hunter implored her Sirius XM listening audience to sign on to petitioning President Joe Biden for a pardon.
The hope is to secure 100,000 signatures.

Hunter is reputed for calling to action, progressive reproach to wrongdoings. Her cutting edge approach to tackling offensive and racist issues has earned her numerous awards and respect from a grateful audience.

Seven years ago, she initiated a petition to remove the Confederate flag from the South Carolina statehouse building after a deranged racist massacred nine congregants at a Charleston church. Listeners to her program responded by registering 500,000 signatures Gov. Nikki Haley could not ignore. Within two weeks the offensive banner was removed.

For Garvey’s 135th birthday anniversary the radio personality decided on revisiting the process of exoneration Cong. Charles B. Rangel introduced in the House of Representatives in 2004, and one President Barack Obama failed to deliver throughout eight years of leadership.

On the show, Anderson revealed how J. Edgar Hoover toiled to malign the reputation of the Jamaican immigrant who dared to change the mindset of Black Americans.

Although primarily a stuntman/actor, Anderson said he was convinced to make the film by Garvey’s youngest son Julius who endeared him to collaborate.
Allegedly, Dr. Julius Garvey first made the proposition in 2013 while Anderson found himself knee-deep in completing his second film “Nanny: Queen of the Maroons” the follow-up to the docudrama “Akwantu.”

Himself of maroon descent, the Ridge Pen, St. Elizabeth native said at the time he was overwhelmed with depicting the true story of the fierce Africans who challenged the British Army.

However, when that document rapped he pondered the idea, and with great compulsion to honor the Garveys he embarked on attempting to redeem the life and legacy of a misrepresented national.

Also that the son of the legend would entrust confidence in his ability factored with influencing his decision to delve into another project.
Soon after making his decision, Anderson embarked on an intense expedition to unearth untold information about the visionary.

He traveled to Ghana, Jamaica and Central America and wherever archives provided amplification of his revelations.

“For all his greatness, Marcus Garvey has often been portrayed as a caricature, and someone marginalized in history,” Anderson said. “Foremost in our minds was telling a story of this oft-misunderstood man, in a way that that was not objective and balanced but insightful and engaging. He may not be the most famous Jamaica (that title goes to iconic reggae singer Bob Marley). But who would have thought that this simple country boy, born almost 50 years after slavery was abolished in the British colonies, would go on to provide the most comprehensive blueprint for the liberation of his people…”
Throughout a solid eight months he invested time and his own finances to help in portraying an honest document he hopes will redeem the reputation of the revered Jamaican role model.

Anderson also incorporates reggae music for a reminder by Steel Pulse to “Rally ‘round the red, black and green,” colors Garvey chose to symbolize Black struggle and survival.

And although the film made the rounds screening at special events in England, Canada, Jamaica and Africa, on the 135th anniversary of the Aug. 17 1887 birth of the nationalist, a world premiere was held at Marcus Garvey Park in Harlem.

The free, outdoor event attracted Garveyites and a curious community. 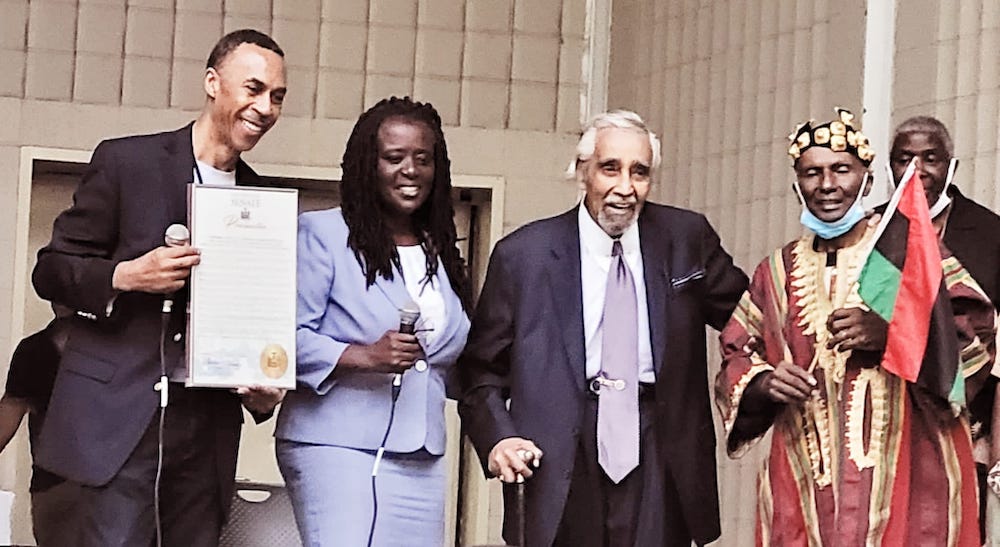 The City councilmember presented a proclamation she said posthumously represents belated gratitude to the ancestor.
Prior to the screening, emcee Tschaka Tonge drummed a riveting treat in tribute to the ancestors.

Narrated by Keith David, the film incorporates re-enactments by Williams, testimonies and documents which attests to the Pan-African hero’s lifelong mission to re-educate masses of mis-educated Africans.

In the film, Anderson asks intellectuals, entertainers, advocates and his surviving son to explain the psyche of the visionary whose dream was to reverse the mindset of a population dominated by negative perspectives of their heritage.

The fact that Garvey met with members of the Ku Klux Klan or that Malcolm X’s parents filed an appeal to President Calvin Coolidge for Garvey’s release from prison after he was convicted of mail fraud may not be common knowledge.

His “One Aim, One Destiny,” mantra directly spoke to his mission of uniting Africans dispersed throughout the global communities and resonates with action from Hunter, Anderson and legions of Garvey’s admirers.

They believe his words mattered particularly when he said: “Up you mighty race, you can accomplish what you will.”
Hunter’s petition drive can be accessed at #freemarcusgarvey campaign