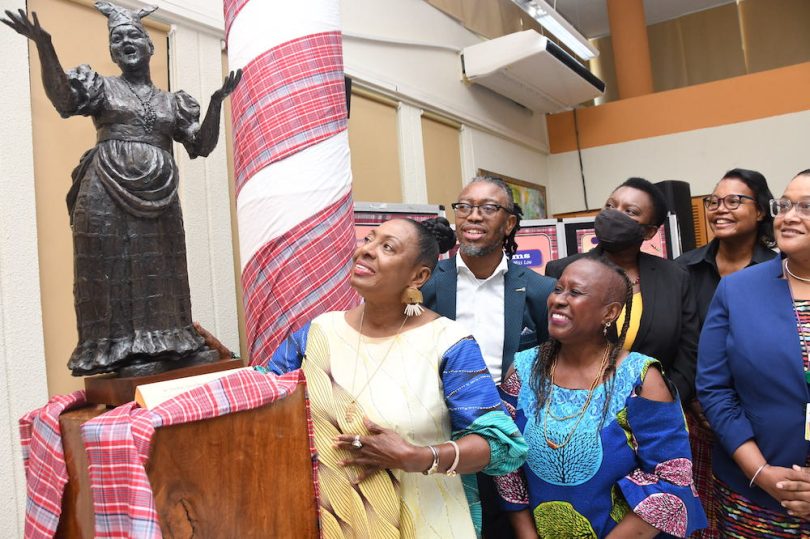 On Wednesday, September 7, 2022, the Kingston Parish Office of the Jamaica Cultural Development Commission (JCDC), an agency of the Ministry Culture, Gender, Entertainment and Sport, collaborated with the UWI Mona Library and UWI Department of Language, Linguistics & Philosophy to host the ‘Unveiling of Miss Lou’s Statuette, Exhibition and Launch of UWI Jamaican Language Unit’s 20th Anniversary Celebrations’ in the Multifunctional Room, UWI Main Library.

The event was held in honour of the late Dr. the Honourable Louise Bennett–Coverley, OM, OJ, MBE, to commemorate the 103rd anniversary of her birth and celebrate her contribution of the rich culture of Jamaica.

The Honourable Olivia Grange, OJ, CD, MP, Minister of Culture, Gender, Entertainment and Sport and other distinguished guests were in attendance along with students and other culture enthusiasts. 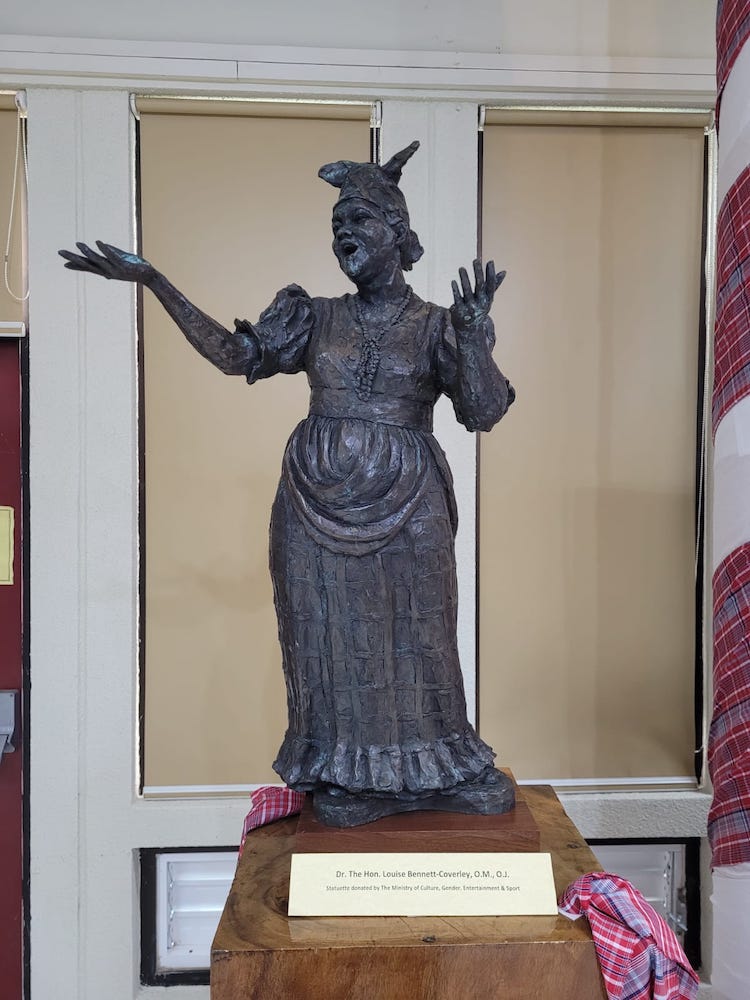 Included in the programme were vibrant renditions of popular Miss Lou poems, traditional folk songs and dances. The performances were delivered by students of varied age groups who payed tribute to the icon dubbed ‘the mother of Jamaican culture.’ Another major highlight of the ceremony was the prayer delivered in Jamaican patois by Pastor Marsha Wade.

In her key note address, Minister Grange expressed heartfelt appreciation and commendation for Miss Lou’s impact on Jamaica’s rich heritage and culture. She emphasized the tremendous role Dr. the Honourable Louise Bennett-Coverly played in influencing worldwide recognition of the extraordinary and indomitable spirit of Jamaicans. For this, Minister said “Miss Lou must constantly be celebrated and her stories must be consistently re-told.”

Dr. Isis Semaj-Hall, Lecturer, Department of Literatures in English and Dr. Joseph T. Farquharson, Coordinator, Jamaican Language Unit (JLU) also sang high praises of Miss Lou with particular emphasis on how she popularized Jamaican patois through her poems, songs, monologues and other works. Dr. Farquharson, who presented his remarks in Jamaican language, credited the icon for laying the foundation upon which the Jamaica Language Unit (JLU) was built.

The unveiling of the statuette was done by Minister Grange. The audience applauded as they watched the grand reveal of the miniature version of the bronze statue also designed by Mr. Basil Watson, that was mounted in Gordon Town in 2019.

The statuette forms part of an exhibition that has been mounted in the Multifunctional Room, UWI Main Library and is open to the public up to September 30. Other month long commemorative events include island wide, exhibitions, concerts and competitions. A schedule of activities can be viewed on the Jamaica Cultural Development Commission’s (JCDC) website and social media pages.

About ‘Miss Lou’
Louise Simone Bennett popularly known as ‘Miss Lou’ was born at 40 North Street, Kingston on September 7, 1919. She influenced many aspects of Jamaican life including poetry and music. She can be considered the original dub poet and the social commentator who pioneered the use of the Jamaican patois in live appearances on stage, radio, television and films as well as in printed literature. Miss Lou died on July 26, 2006 in Canada. She was 86 years old. She was accredited an official funeral by the Government of Jamaica which was held at the Coke Methodist Church in downtown Kingston on August 9, 2006 and interred at the National Heroes Park.