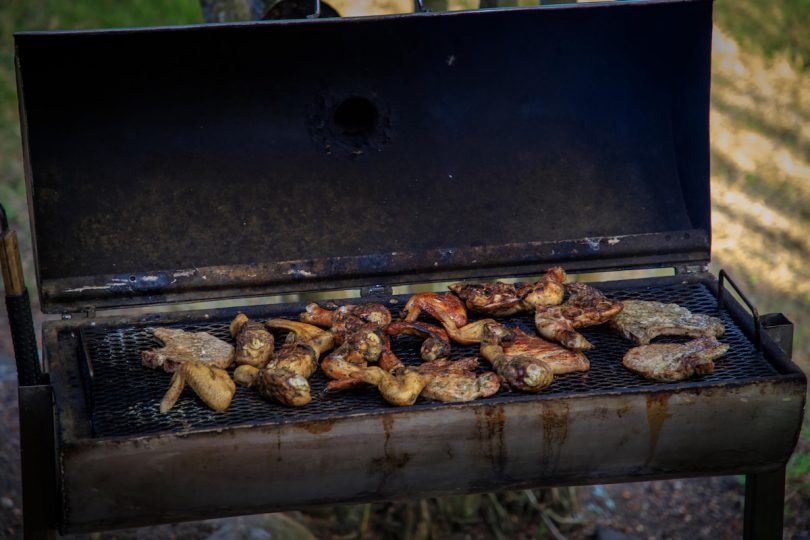 By tradition, Jamaicans do not cook at home on Fridays. During the rest of the week, they are happy to apply their exceptional cooking skills in their own kitchens, but Fridays are a different matter. Observers of Jamaican culture have often wondered why this should be. Why do Jamaicans take Friday as a day of rest from regular cooking chores? Two Jamaican cultural experts, Andrea “Bumpyhead Gal” Hutchinson & Owen “Blakka” Ellis, offer their perspectives on the matter.

Andrea Hutchinson is a Public Speaking Coach, Communications Specialist, Remedial Language Teacher, English Language Guru, Writer, Storyteller, Actress, Motivational Speaker, and Teacher. She is also a producer and presenter for radio and television and has been writing poems and stories in Jamaican Patois for over 20 years.

According to Hutchinson, Friday has always been pay day for lower-level workers, many of whom lived hand-to-mouth and had a difficult time stretching their food supplies until the next paycheck. When payday comes, it is a cause for celebration, and workers bring home special treats like fast food, ice cream, or pizza, for their partners and children. They may even stop at a rum bar to party for a while, or go to the supermarket to stock up for the coming week. “All of this is done with what little you have after paying back all the little sums of money you borrowed during the week and paying for all the things you ‘trust (took on credit),” she said.

Owen “Blakka” Ellis is a writer, educator, and performing artist. He is Director of Communication, PR, and Research for Ellis International, a Jamaican entertainment production and talent management company that produces a range of theatrical productions, stand-up comedy events, and television projects. Ellis is widely regarded as one of the top comedic entertainers in the Caribbean. Born in Kingston on April 15, 1960, he attended Trench Town Primary School, Excelsior High School, Jamaica School of Drama and The University of the West Indies. In 1977, he won the Secondary Schools Drama Festival Award for Best Actor. He also co-wrote the national pantomime “Schoolers,” which won the Jamaica Music Industry (JAMI) Award for Best Musical in 1989. In addition, he wrote and directed “Pump Up the Fun!” which won a JAMI award for Best Children’s Musical for Groundwork Theatre Company in 1990, and in 1998, co-produced and starred in one Jamaica’s most successful comedy productions “Laugh Jamaica,” which won the Actor Boy Award for Best Revue.

Ellis has written songs for singer Judy Mowatt and created performance material for comedians Oliver Samuels, Tony Hendriks and “Ity and Fancy Cat”. He has performed at Reggae Sunsplash and toured France as a percussionist and backing vocalist with dub poet Oku Onuora and his band “AK7.” He has worked as actor on two national pantomimes, numerous plays, the ABC television series ‘Going to Extremes”, the Warner Brothers feature film “Club Paradise”, the Jamaican blockbuster “Dancehall Queen,” and various television and radio commercials. He has performed at the world famous Apollo Theatre in New York, The Hackney Empire in London, and at major comedy festivals in Toronto. Blakka has performed in New York, Los Angeles, Florida, Washington DC ,and all over the Caribbean as a solo act and as part of the popular “Bello & Blakka” duo.

As well as being an established artist, “Blakka” is involved in education and training, conducting workshops and training seminars for development workers, cultural agents, Peace Corps volunteers, diplomats, teachers, and performing artists locally and around the world in England, Germany, Canada, and Zimbabwe. He is a founder of the Arts-in-Education project “Area Youth Foundation,” co-authored the training manual, “Men and their Families,” and lectured at the Edna Manley College of the Visual and Performing Arts for over ten years. He is an active member of the Rotary Club of Kingston East and Port Royal and served as Chairman of the Board of Directors for Trench Town Primary School for nine years.

Ellis enthusiastically supports Hutchinson’s explanation, adding that he grew up in the inner-city with an aunt who made her living selling on the street. “She invariably came home later on Friday evenings and usually with a little more cash, so we the children got money to buy our own treats on Friday nights. It became a pattern for me.” He added that he notices community street food outlets, which offer roast fish, fry dumpling, soup, and jerk chicken, among other foods, initially targeted Fridays just for that reason. “ On Fridays they knew people would be a little more cash rich, and they also expected fewer people to cook at home on that day.”