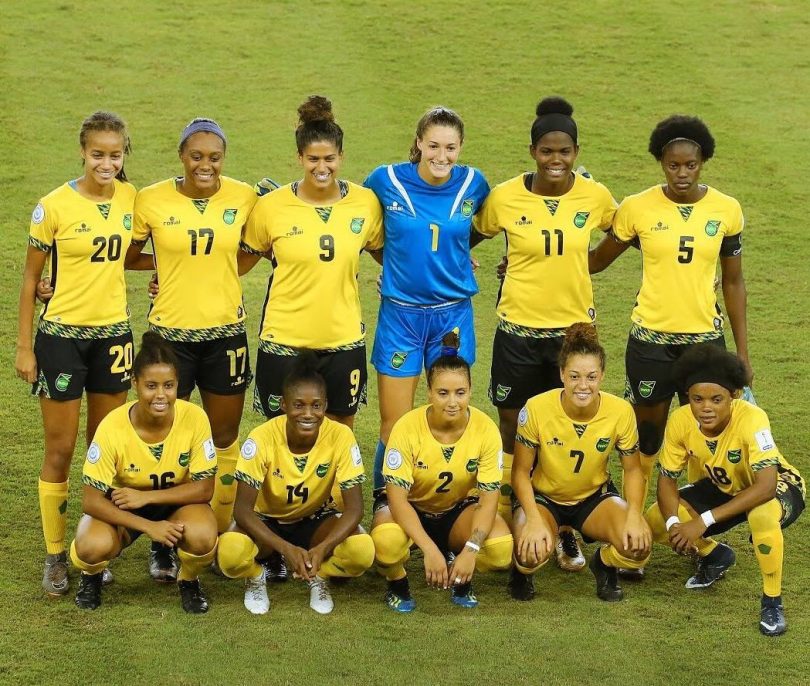 A mere “Top 10” isn’t enough to describe another big year for Jamaica’s athletes, with female athletes in particular turning in spectacular performances. Jamaica’s women’s bobsled team qualified for the 2018 Winter Olympics, persevering despite losing their coach and their sled. Two Jamaican women became the first referees from the Caribbean to be chosen to officiate at FIFA. The Reggae Girlz won a place at the World Cup for the first time, and the Sunshine Girls are ranked third in the world. Women broke records and made history at the Racers Grand Prix and the 3,000-meter steeplechase.at the Commonwealth Games. A Jamaican also made history at the Caribbean Junior Cycling Championships becoming the first from the country to win a medal at the regional championship. And just one day after turning 30, Olympic swimmer Alia Atkinson added a gold medal from the World Championships, her first at the event, to her list of achievements. Jamaican men also achieved athletic heights, with impressive wins at the IAAF Continental Cup. the hurdles event at the World Indoor Championships, and the British Diving Championships. The year’s athletic achievements were marred only by the ruling on an appeal to the Court of Arbitration resulted, which resulted in the loss of a gold medal for Jamaica at the 2008 Olympics.

JAMAICA’S WOMEN’S BOBSLED TEAM QUALIFIES FOR 2018 WINTER OLYMPICS
Thirty years after the Jamaican men’s bobsled team debuted at the Winter Olympics, Jamaica has qualified a women’s team in the sport. The team will travel to Pyeongchang, South Korea, in February 2018, marking the first time a women’s team representing Jamaica will participate in the Olympic Games. Carrie Russell, brakeman, said that qualifying was the one of the happiest moments in her life. She was a member of Jamaica’s 4×100 women’s relay team that won the gold medal at the 2013 IAAF World Championships in Moscow. This is her second season as a bobsled athlete. Other team members are Audra Segree, brakeman, and Jazmine Fenlator-Victorian, pilot.’’

WOMEN’S OLYMPIC BOBSLED TEAM LOSES COACH
Remaining positive following the departure of their coach Sandra Kiriasis, Jamaica’s first Olympic women’s bobsled team says it will be alright. The Jamaica Bobsleigh and Skeleton Federation (JBSF) has stated that neither the association nor the athletes will be affected by Kiriasis quitting. The team continues to prepare for its debut on the Olympic stage in Pyeongchang, South Korea. Kiriasis was a world, European, and Olympic champion who competed for Germany. According to Kathleen Pulito, an official at the JBSF, the team’s unity has improved since she left, noting that the situation has brought the team even closer. The Federation said that the team is moving forward with its own personnel, but will accept assistance from the Canadian team if necessary.

REGGAE GIRLZ WIN HISTORIC SPOT IN WORLD CUP
For the first time in history, Jamaica will be represented at the Women’s World Cup competition. The Reggae Girlz were victorious over Panama in overtime after playing to a 2-2 draw at the CONCACAF qualifying tournament. The Reggae Girlz are ranked at Number 64 in the world before they became the first team from the Caribbean to go to the World Cup. Jamaican just restarted its women’s national team program in 2014 after a hiatus of six years. The team is strongly supported by Cedella Marley, Bob Marley’s oldest daughter. After the win, the team’s coach Hue Menzies said, “This is a statement. We’re going to go back home and celebrate. There’s not a whole lot of space on that island. But we’re gonna find every inch to celebrate on. Because this is history. History in the making.”

JAMAICA’S SUNSHINE GIRLS RANKED THIRD IN WORLD
The Sunshine Girls, Jamaica’s senior netball team, has moved up a place in the most recent world rankings and is now in third place, according to the International Federation of Netball Association. The new rankings are based on matches played up to December 2, 2018, and include the Sunshine Series, Canada vs Cayman Islands Test Series, Netball World Cup 2019 Qualifiers in Africa, the Americas and Asia, the autumn Quad Series (between Australia, England, South Africa and New Zealand), and the recent England vs Uganda Series.The Jamaican team has a 172 ranking, which is equal to Number Four England. New Zealand is one point ahead with 173, while Australia leads the rankings with 211.

JUMPER THOMAS-RICKETTS BREAKS RACERS’ GRAND PRIX RECORD
Shanieka Thomas-Ricketts set a new record at the JN Racers Grand Prix, making a jump of 14.39 meters on her final effort. She broke the record despite having arrived back in Jamaica from the Oslo Bislett Games in Norway, where she finished fourth with a jump of 14.44 meters only hours before having to perform at the competition. Thomas-Ricketts said she was grateful to have accomplished such an achievement because she was very tired at the time and is taking nothing for granted. She managed jumps of 13.94 meters, foul, 14.26 meters, 14.04 meters,and 13.92 meters before breaking her own record in her final jump.

PRAUGHT-LEER MAKES HISTORY IN 3,000 METER STEEPLECHASE
After winning the gold medal in the 3,000-meter steeplechase at the 2018 Commonwealth Games in Gold Coast, Australia, Jamaica’s Aisha Praught-Leer. 28, said, “This win is for everyone.” Praught-Leer is the first Jamaican to win a gold medal in the event at the international senior level, making track and field history. She finished the event with a time of 9:21:00. While she was born in Mississippi, the athlete represents Jamaica by virtue of her father, a Jamaican musician. “Anything is possible, and I would like to dedicate this medal to my husband, my family, my massive support team, my coach and training partners, and, of course, to our beautiful country!” she said upon winning.

JAMAICAN MAKES HISTORY AT CARIBBEAN JUNIOR CYCLING EVENT
Lori Sharpe of Jamaica made history at the Caribbean Junior Cycling Championships in Bermuda by winning a silver medal in the 50k road race. Sharpe, a tri-athlete, is the first Jamaican junior cyclist to win a medal while participating in a regional championship/ Speaking of her medal, Sharpe said she had no expectations about the event since it was her first cycling championship competition. She said she was “over the moon” about taking the silver medal. Sharpe also competed in the 10k time trial where she came in fourth. She went on to say that it felt good “to be able to do well for Jamaica” and to represent Jamaica in a regional race for the first time.

SELECTION OF JAMAICA REFEREES SHOWS STRENGTH OF WOMEN’S FOOTBALL
Jamaican referees Princess Brown and Stephanie-Dale Yee Sing have made history by becoming the first female referees from the Caribbean to officiate at a FIFA World Cup final. The due fulfilled their durries in the Under-17 Women’s deciding match between Span and Mexico in Uruguay. The performance of the two women illustrated how strong the women’s football program is in Jamaica, and Yee Sing and Brown were selected for the short list for the Senior Women’s World Cup slated for France in 2019.

ALIA ATKINSON WINS GOLD MEDAL AT WORLD SWIMMING CHAMPIONSHIPS
Just one day after her 30th birthday, Jamaican Olympic swim star Alia Atkinson won her first World Championship gold medal in the 50-meter breaststroke competition Hangzhou, China. Atkinson came from behind to take the gold with a time of 29.05 seconds, defeating her long-time rival Ruta Meilutyte of Lithuania, who won silver with 29.38 seconds. Atkinson set a world record earlier in 2018 in the 50-meter breaststroke with 28.58 seconds, beating her own previous record time set in 2016.

DACRES BREAKS MEET RECORD, WINS AT IAAF CONTINENTAL CUP
Jamaican Fedrick Dacres had a big win at the IAAF Continental Cup competition in Croatia, with a discus throw of 68.17 meters, a distance that broke the meet’s previous record. Dacres, 24, won the discus title at the 2018 Diamond League, and his throw in Croatia beat the old record set by Lawrence Okoye of Great Britain in 2012 by over three meters. Dacres was the only winner from the Caribbean at the competition.

YONA KNIGHT-WISDOM WINS HIS FIRST MAJOR DIVING TOURNAMENT
Jamaican diving sensation Yona Knight-Wisdom won his first major diving tournament in the Men’s 1m final at the British Diving Championships. The competition represents part of his preparation for the Commonwealth Games in Gold Coast, Australia, in April 2018. In an interview in The Gleaner newspaper, Knight-Wisdom, 22, related that it was the first time he actually won a major competition and that it represented a major accomplishment for him. He believes that his performance in the latest tournament shows that he is in a good place in preparing for the Commonwealth Games. Knight-Wisdom said his goal is to give 100 percent for Jamaica, perform as well as he can, and get on the podium in either the 3m or 1m contests.

JAMAICAN RONALD LEVY WINS GOLD MEDAL IN INDOOR HURDLES
Ronald Levy, 25, showed his intention to be a contender for a medal at the World Indoor Championships in March 2018 with his victorious achievement of a gold medal in the 60-meter hurdles in the finals of the World Indoor Tour in Glasgow on February 25, 2018. Levy was among several Jamaicans who won medals at the Muller Indoor Grand Prix. He has been chosen to represent Jamaica at the championships in Birmingham, England, scheduled from March 1 through 4. He clocked a personal best time of 7.48 seconds, taking first place ahead of Aries Merrit of the United States and Andrew Pozzi of Great Britain.

CARTER LOSES APPEAL, JAMAICA LOSES 2008 RELAY GOLD
A Court of Arbitration for Sport dismissed the appeal of Jamaican sprinter Nesta Carter of disqualification from the 2008 Olympics in Beijing for a positive drug test that was found eight years later. Carter ran the first leg in the 4×100 meter relay. Usain Bolt ran the third leg and helped Jamaica to a world record win of 37.10 seconds in the event. However, analysis of Beijing samples by the International Olympic Committee in 2016 found that Carter tested positive for a prohibited stimulant. As a result, Jamaica was disqualified and stripped of the gold medal. According to the court, it “could not accept any of the arguments raised by Nesta Carter contending that the test results should be ignored or the IOC (disciplinary) decision should otherwise be overturned for certain alleged failures.” The verdict, not unexpected, spoils the perfect Olympic career of Usain Bolt, who received three golds in the 100, 200 and 4×100 meter races at three consecutive games in 2008, 2012, and 2016.The medal for the 2008 relay now goes to Trinidad and Tobago.