Conversation with Andy Bassford on "The Harder They Strum" Instrumental Reggae covers - Jamaicans.com 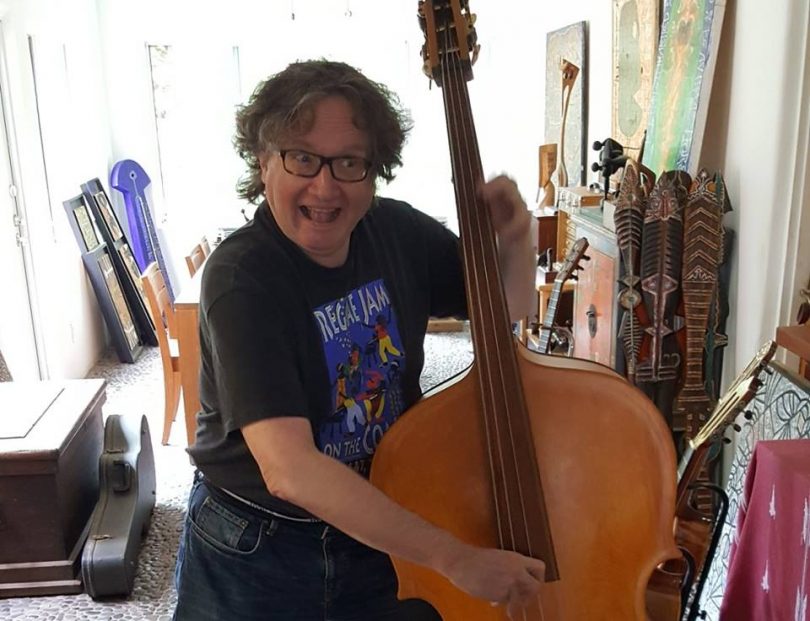 Andy Bassford’s musical baptism in playing reggae began two of the best bands in reggae: Roots Radics and the legendary Lloyd Parks and We The People w/Dennis Brown. Although he has recorded and performed in a wide variety of other styles Bassford is known primarily for his work in the reggae genre. Andy’s playing appears on eight Grammy Award-nominated and two Grammy-winning albums, Burning Spear, Jah Is Real and Toots and the Maytals, True Love, NARAS. 2005. His platinum credit is Rihanna a Girl like Me, RIAA, 2006 and a #1 Billboard Folk Chart album with Natalie Merchant. His other album credits include at least 200 albums and 2500 songs over a career over five decades. In 2003, he was honored by the Jamaica Federation of Musicians for Outstanding Contributions to the Jamaican Music Industry, one of the only non-Jamaicans to receive this award. Bassford is a known primarily for his work in the reggae genre.

Andy released his first solo instrumental project earlier this “The Harder They Strum.” Jamaicans.com Senior Music Editor Stan Evan Smith talked to him about the new project, and his career in music.

1. In a genre where instrumental albums are rarely made and, almost never sell why did you decide to record “The Harder They Strum”?
For decades people have been asking me when I was going to record my own album. I got tired of them asking! I also recorded a project called Island Head a few years ago. It was instrumental remakes of Bob Marley songs and featured a lot of my guitar solos. Sirius XM The Joint played the album regularly for 18 months. So I had evidence that the concept of reggae covers with my guitar would work on radio.

2. How long did it take you to record The Harder They Strum?
The album took maybe 30 hours total to record. It was all done live except for New Kingston’s vocals and the multiple guitar parts on 007 (Shanty Town). But it took almost three years to get it finished due to finances, scheduling issues, and self-doubt.

3. Your musical background include a wide variety of other styles, Rock, Latin Jazz, and Country, how many of these genre influences can be heard on “The Harder They Strum”?
Almost all of them! I was always struck by the parallels between Latin music and dance hall, so I made those explicit on “Sitting In Limbo” by hiring Willie Martinez to play timbales along with New Kingston playing a dance hall groove. The country influence can be heard on that track as well as on “The Harder They Come.” My rock and blues background is apparent on most of the rest of the record. My jazz side comes out on “Stop That Train” where I trade solos with Monty Alexander, as well as the Dixieland fadeout on “Rivers of Babylon.” I sang in church choir, and that’s where the hymn sound on the horn intro to “Rivers of Babylon” comes from. The only thing I didn’t incorporate was my classical music background. I want to get that into my next record somehow. I want to hear my guitar in reggae with strings and woodwinds as well as horns.

4. Is there any difference when the record with, or work onstage reggae legends Dennis Brown, Toots and the Maytals or dancehall legend Shaggy?
When you work for artists as a sideman, you must provide what the they need in order for them to give their best. It’s a bit different with everybody and people aren’t always clear about it themselves. This is where intuition and experience help. With Dennis, it was replicating the lead guitar parts on his records, but he loved it when I put my own flavor on them. With Toots, on lead he wanted me to stay out of the way of the vocal, and take dynamic solos when it was time for that. When I played rhythm, he wanted the exact part on the record without variation, sometimes for 20 minutes straight! With Shaggy, sometimes I replicated parts on records so that they didn’t have to use samples. At other times, he and Sting just turned me loose to play what I hear.

5. What do you hope to achieve with The Harder They Strum?
My original idea was to make a record that sounded as much like me as possible while also creating music that the roots reggae audience would enjoy. I think we did that. I know when you make an album you must promote it, but I really didn’t expect much. I assumed I’d just sell the album at shows. The response to the record, frankly, has astonished me. In a perfect world, I’d make enough money from the album to record another one.

6. The majority of your work has been working with other artists, is recording a solo instrumental album different? If so, how?
It’s much harder to do your own music. When I work for other people, I come to the studio, play until they are happy, get paid, and leave! Lots of times I never hear the final product unless it’s a hit. There’s much less risk and responsibility for the outcome. With my own music, I’m artist, producer, manager, financier, record company owner, publicist…it’s like having a second full-time job! It’s been very rewarding though.
The idea behind “The Harder They Strum” was to record songs, and a concept, that people already love since I was emerging as an artist for the first time. I have a decent catalog of original material, both instrumental and vocal. But I think that will be the third album if I get to one. I think I’ll do one more covers album first. However, I may release some original music as singles. I think about things a long time before I act, so I’m not sure yet. I can guarantee that lots of people on this record will be involved in whatever follows.

Many people have seen you perform live on stage but they do not know Andy Bassford. Share some personal insights:

Andy Bassford’s favorite guilty pleasure/hobby is…
…walking around a place I’ve never been before.

Finish the following sentence, making The Harder They Strum was …
…very challenging, but even more fun!

Does Andy Bassford have a career besides music?
No! I worked in Human Resources for twenty years to put my children through school. I learned a lot that was helpful in my music career. But I don’t see myself doing anything else now.

One simple action you think everyone could take to make the world a better place?
Really listen to people when they talk to you, particularly if you disagree with them, and don’t respond until they are finished. People need acknowledgment; sometimes that’s all they need.

Finish the following sentence “If I was not a musician I would be…
…working with young children. So many of them have no fathers, and they crave positive male input.