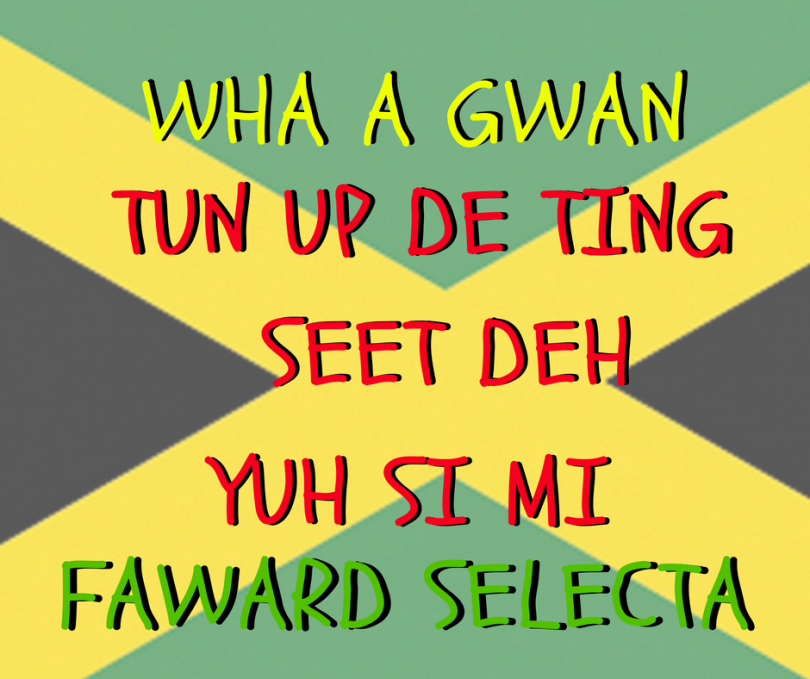 The United States magazine Fader has provided an extensive review of how reggae and dancehall music have brought Jamaica’s patois language into the mainstream. In the article, author Eternity Martis, who lives in Toronto, Canada, notes how many people other than Jamaicans are using phrases like “Gaza mi seh!” and wonders if they actually know what they are saying or where the language comes from.

According to Martis, patois, and its hybrid diasporic version, is a language that is used by native-speaking migrants, second and third generation Jamaicans and now, non-Jamaicans who life in the US, the United Kingdom and even in Japan. Its ubiquitous usage can’t only be attributed to migration, however; the most likely reason is its prevalence in reggae and dancehall music. These genres, which rely on patois, have become increasingly more popular among mainstream listeners since the 1970s. The popularity of reggae and dancehall continue to make the pop music charts, and in 2016 alone, Jamaican musicians like Sean Paul, Spice and Popcaan have worked with other pop artists to expand the genres.

To understand how Jamaican patois has been absorbed into mass culture requires an understanding of how it began. Martis quotes linguistics professor Hubert Devonish at the University of the West Indies, Mona, who suggests that it might not have actually originated in Jamaica. While there is no certainty about its beginnings, some linguists believe it originated as an Afro-English language in St. Kitts or Barbados. These were the first permanent British colonies established in the Caribbean – 1624 and 1627, respectively – with the hybrid language formed via contact between West Africans and Europeans during the years of the transatlantic slave trade.

Some fans point to Drake as the source of the slang terms without knowing that so-called “Drizzy slang” originated in Toronto and represents, in turn, an adaptation of Jamaican patois. With the migration of people from Jamaica to the United States, UK and Canada after World War II, particularly the large number of immigrants from the West Indies who traveled to Britain in 1948, Jamaican music became increasingly popular. Ska and rocksteady were the top genres among these population sin the 1950s and 1960s. Reggae emerged in the 1970s when white people focused on Bob Marley but couldn’t understand him. Christopher Blackwell, found of Island Records, targeted this fan base and brought Marley and The Wailers into the mainstream by adding rock-and-roll elements and replacing standard English lyrics for patois lyrics.

While reggae merged into the mainstream of pop music, the new wave of Jamaican music emerging in the 1980s – dancehall – faced a greater challenge internationally because, Devonish said, music experts believed that nobody could understand its non-standard English. With the global popularity of Jamaican culture, however, the continued use of patois became trendy. Dancehall artistes like Shabba Ranks, Patra, and Chaka Demus and Pliers gave dancehall some of its first major hits in the US during the 1980s, while Buju Banton, Spragga Benz, Bounty Killer, and Beenie Man popularized it through the ’90s.

Martis also quotes Sonjah Stanley Niaah, director of the Institute of Caribbean Studies and Reggae Studies at the University of the West Indies, Mona, who believes the Internet and other digital sources have contributed to the spread of Jamaican music and its patois lyrics in the 21

st century. According to Niaah, Jamaica is the only nation in the latter part of the 20th century to have given seven distinct musical genres to the world, and as listeners savor the rhythms, they increasingly try to understand the words and start looking up the patois language. However, there remains a belief that patois is somehow an “uncivilized” or “improper” way to speak, and there continues to be a negative image of Jamaica and the dancehall genre as being overly sexual, violent, sexist, homophobic and misogynistic. As Niaah said, dancehall causes a “moral panic” among non-Jamaicans, but she does not believe the criticisms stem from any malice. And she points out that the success of dancehall has given all Jamaicans, and particularly women, the confidence to express their own culture rather than reject it or assimilate into other cultures. Patois is a critical element of this pride of culture as more and more Jamaicans take to social media and discuss whether the mainstreaming of dancehall music and culture indicates success for Jamaican artists or their exploitation.

Native speakers of patois are glad people outside of Jamaica are learning the language, and several universities, including the University of Toronto and Harvard University, offer courses in patois that are very popular with students.

But tensions around patois remain, both overseas and locally in Jamaica. The 2005 Language Attitude Survey of Jamaica, the first officials survey concerning how language is perceived, found that more than half of Jamaicans think those who speak patois have less education, are less intelligent, and poorer than those who use standard English. Forty percent admitted that they thought people who spoke patois were more friendly, however.

Standard English is currently the official language of Jamaica and is used in school, work, and government environments and int interactions with strangers. Debates about making both English and patois official languages in the country continue, with many activists and scholars attempting to reclaim patois by calling it “Jamaican.” They want its name changed because the word “patois” suggests a non-standard dialect of French rather than a distinct and separate language. According to Devonish, “We do this to make it clear to both Jamaicans and overseas people that this is a language associated with a nation.”

Proponents of patois, or Jamaican, note that it is more than just “an island ting.” It is the language that holds Jamaicans in the diaspora together. This is the reason its use as slang by those outside the Jamaican culture troubles them. Mainstream pop music is capitalizing on dancehall, a genre based on patois, without trying to create strong and sustainable relationships with Jamaica’s music industry or eliminating stereotypes about its origins. Patois developed through a history of exploitation, death and enslavement, Martis writes, and it now is a symbol of community, healing and resistance. Martis concludes with a plea for patois to be spoken with the understanding that “it is a language of freedom.”