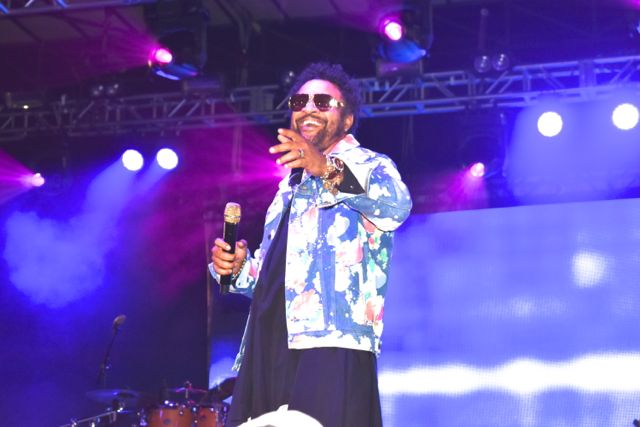 The West Palm Beach edition of Florida’s Jerk Festival held on Sunday July 4th ushered in a breath of fresh air for the thousands who flocked to the South Florida Fairgrounds to revel in Caribbean culture and indulge themselves in Jamaican jerk cuisine that included jerk chicken, jerk pork, jerk fish, jerk lobster, and even jerk ice cream.  Considered one of Florida’s marquis food-centric events, this year’s 18th Annual Florida Jerk Festival was not only packed with patrons, but also with excitement after a year with outdoor fun and live events few and far between due to the Covid-19 pandemic.  Also attending the festivities were Jamaica’s Consul General to Southern U.S.A., Oliver Mair, along with Commissioner Dale V.C. Holness—who is presently a candidate for the Congressional seat held by the late Alcee Hastings.  The form of the event was somewhat different this year after being rebranded to offer the festival experience to both in-person and virtual.  The festival’s rebranding also entailed structural changes as well as the donning of its new name—Florida Jerk Festival—which also features a new logo and website. 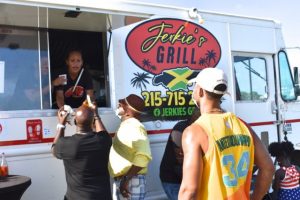 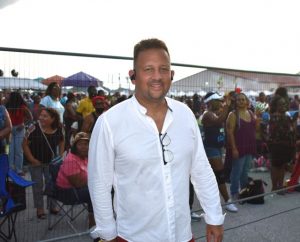 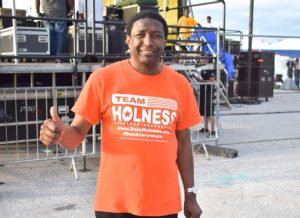 Indeed, the Florida Jerk Festival has always strived to be a fun event that is family-friendly.  In that spirit, the ‘Kid Zone’ featured a number of fun-oriented activities, including face-painting, rock climbing, the opportunity to ride a Ferris wheel, as well as a mechanical bull.  As such, families definitely had a good time with their kids being able to enjoy themselves in a carnival-like atmosphere.

Adding to the festival’s excitement this year was a top-notch list of acclaimed musical acts, including Jamaican Grammy award winner, Shaggy, soca star, Skinny Fabulous, who hails from St. Vincent and the Grenadines, and L.U.S.T—the reggae group based in Jamaica that is comprised of Lukie D, Thriller U, Singing Melody and Tony Curtis.   Talented artists, Lici Soul and Hype Type aka Zion Boss were also on the bill of performers.   What’s more, several big-name Jamaican sound systems and top selectors were on hand to ‘nice up di place’. 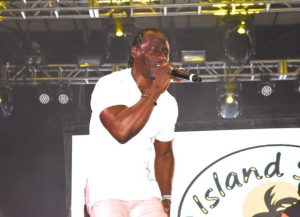 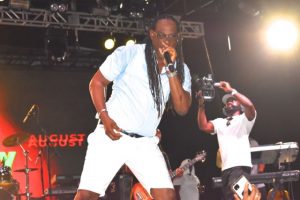 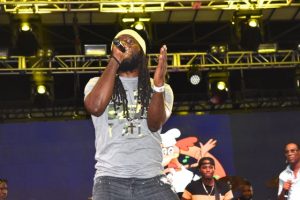 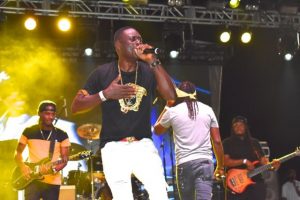 In the early going, things got warm courtesy of sound selectors Richie Pooh and Waggy T who had the South Florida Fairgrounds thumping to ‘oldies but goodies’—notably Bitty Mclean’s ‘Walk Away From Love’ and a slew of Bob Marley classics.  Dancehall favorites from the ‘90s were also dished out, including ‘Romie’ by Beenie Man, ‘Bogle’ by Buju Banton, ‘Dolly House’ by Spragga Benz, and Bounty Killer’s ‘Worthless Bwoy’.  Dave Kelly’s ‘Showtime Riddim’ was also featured heavily in the juggling mix with hits like ‘Mi Nuh Like’ by Spragga Benz, ‘Gal Pon Di Side’ by Frisco Kid, ‘Eagle and Di Hawk by Bounty Killer, ‘Bashment Party’ by Rayvon and Red Fox, ‘Searching’ by Wayne Wonder, and ‘Hot Gal’ by Shaggy who, of course, ‘shelled di place’ later on in the night. 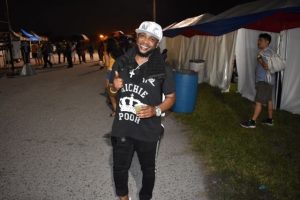 Stone Love Immortal’s legendary selector, Billy Slaughter, energized the crowd of patrons with some choice dubplates.  Headquartered in Kingston, Jamaica Stone Love sound system was founded by Winston “Wee Pow” Powell in 1972. Mr. Powell built the ‘sound’ from the ground up, and all his perseverance and hard work surely paid off in a big way seeing that Stone Love has become a household name in Jamaica as one of the island’s most popular ‘sounds’ of all time. Through the years and up to this day, Stone Love—commonly referred to as ‘Stone Love Immortal’—is held in high esteem in the Jamaican music industry for its superior sound quality and exclusive dubplates, which have not only featured but also helped to establish the careers of a number of prominent reggae and dancehall artists, such as Shabba Ranks, Buju Banton, Wayne Wonder, Sanchez, Tanya Stephens, Capleton, Bounty Killer and Beenie Man—just to name a few. 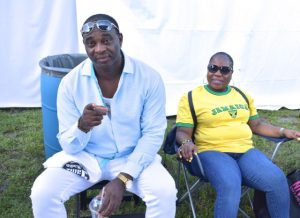 Once the live performances segment of the festivities got underway, it was evident that the acts on the bill came to leave their mark.  To that end, Hype Type aka ‘Zion Boss’ charged onto the stage with ‘nuff vibes’ and the crowd lifted up right away as Hype Type launched into his sizzling dancehall style set by delivering ‘Fire With Fire’ and ‘My God Love Me’.   Hype Type’s lyrics, energy, and stage presence were definitely on point.   As a late addition to the list of performers, Hype Type was keen to make the most of it and gave the festival-goers everything he had and then some. 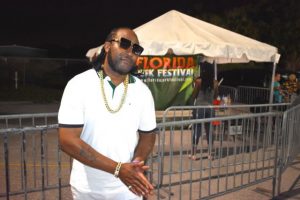 Vicentian soca sensation, Skinny Fabulous, also brought a ‘whole heap’ of energy as he got the large crowd bouncing to his catchy hit songs.  The multi-faceted Skinny Fabulous also wowed the festival-goers with his rendition of some big dancehall hit songs in an ode to the genre and to the crowd’s delight.  Skinny Fabulous certainly showed why he is a Soca Monarch winner five times over after having created history in Trinidad and Tobago by garnering the 2019 Road March title with his hit ‘Famalay’ which features Trinidadian soca artists, Bunji Garlin, Alvarez and Machel Montano. 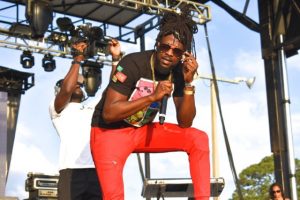 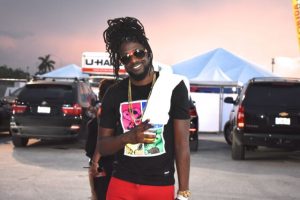 The sultry voiced, LiCi Soul, had an eclectic vibe to her performance set and was not shy about showing off her impressive vocal range and unique sound.  Raised in Jamaica, LiCi Soul was inspired by the likes of Sade, Anita Baker, and The Wailers, and many others.  Those inspirations certainly flowed through her music sound—which had a smooth fusion of reggae and R&B.  LiCi Soul’s vibe was certainly refreshing in every aspect. 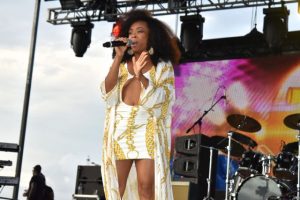 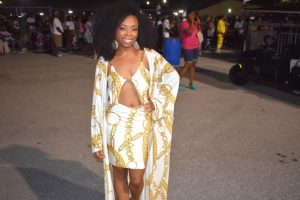 L.U.S.T., with the singers Lukie D, Thriller U, Singing Melody & Tony Curtis, had the festival-goers spell bound with their harmonies and vocal skills.  The group was started by Singing Melody in the 2000s and their undeniable chemistry was evident as they effortlessly traded songs and verses as they moved through their collective stage performance. 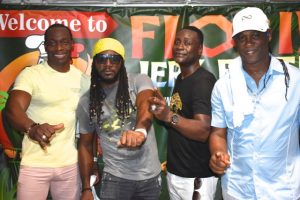 International reggae and dancehall sensation, Shaggy, capped off the night in grand style and his fans definitely waited into the night and endured the drizzling rain to see a legend in action.  Shaggy as always did not disappoint as he churned out a barrage of hits from his enviable vault, including ‘Oh Carolina’, ‘Mr. Boombastic’, and ‘It Wasn’t’ Me’.   Shaggy has racked up over 30 million album sales and a mountain of hits over the span of his multi-decade career.  His most recent hit song, ‘Go Down Deh’ is currently dominating the reggae music charts around the world along with amassing 11 million YouTube views, and the song is a collaborative effort with Sean Paul and Spice—who is widely regarded these days as the Queen of Dancehall. 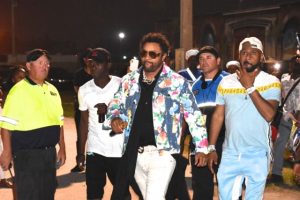 In retrospect, this year’s 18th Annual Florida Jerk Festival was no doubt a big relief for the throngs of festival-goers that packed the South Florida Fairgrounds.  That is, a big relief that the Covid-19 pandemic—which had casted a pall over the music and entertainment industry over the past year and a half—are finally starting to break up, thereby allowing for great events such as the Jerk Festival to take place full throttle.  What’s more, there are many more events now being cued up and that is exactly what reggae and soca music lovers and Caribbean cuisine foodies are relishing.