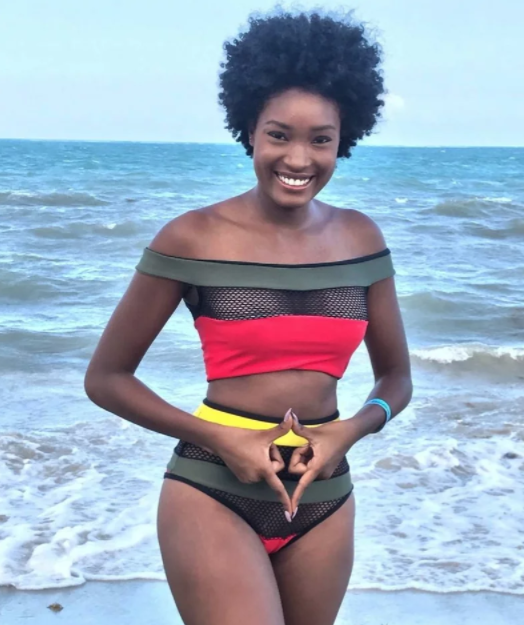 There were many Jamaicans newsmakers during 2017 in many fields, winning the hearts and minds of people around the world. They made a difference to their communities and were recognized by society as positive influences and exceptional representatives of Jamaica’s culture. Here are a few that stood out for each month in 2017. Saffron Jackson is the founder of the Zuree doll company. Born in West Prospect, Bog Walk, St. Catherine, her mother is a hairdresser, and her father worked as an electrician. Her grandparents, who were Jehovah’s Witnesses, valued education, and Jackson was student at three different high schools in Jamaica: St. Mary’s College, St. Jago High School, and Sixth Form at St. Catherine High School. She attended Shortwood Teachers’ College, and after college, moved to the United Kingdom and worked in a Sixth-Form college for several years. In 2012, Jackson moved back to Jamaica, and while she wanted to be a teacher there, she was unable to find a job. In 2013, she returned to the UK and got a job as an SEN English teacher, working  with children facing social, emotional behavioral challenges. She works with her local community and became the first representative of Jamaica Diaspora Future Leaders in the UK to have a major role in organizing the very first conference of that organization in Kingston in 2009. Jackson founded Jamaica Inspired UK (Jamin) and also served as vice-chair of the Jamaican Basic Schools Foundation UK for seven years. In 2007, Jackson received the Ambassador of Peace Award from the UPF, a subsidiary of the United Nations. Orthopedic surgeon Dr. Kingsley Chin, who was born in Buff Bay, Portland, worked to develop an advanced artificial spinal disc to alleviate patients’ suffering. He used his new technology in February 2017 in a disc replacement procedure at Andrews Memorial Hospital in St. Anthony. Dr. Chin is the CEO of KIC Ventures, a venture capital company focusing on medical technology. He is also the owner of AxioMed, the health technology firm that developed the Freedom Cervical Disc. In the February surgery, Dr. Chin treated a woman with a prolapsed disc, who, without the procedure, would have had to undergo numerous spinal operations that would limit her neck mobility. Dr. Chin is both a physician and an engineer and worked with Jamaica’s track and field team. He also works with the founder and CEO of the LESS Institute, a philanthropic effort that has trained more than 200 surgeons around the world. Dr. Chin’s advocates treatment methods that involve  “less exposure surgery” that can be performed on an out-patient basis, brining better outcomes and experiences for patients than they may get in a hospital setting. Erna Brodber was the 2017 winner of Yale University’s Windham-Campbell Prize in international literature. One of eight writers recognized by Yale for achievement or promise. Brodber comes from Woodside in St Mary and has been a major voice in Caribbean literature for her entire 40-year career. In her work as activist, scholar, and writer, Brodber explores the oral and written traditions of the African Diaspora, focusing on sources that include the tales of Anansi, the spider god, to the novels of James Joyce. Among her works are “Myal” and “Nothing’s Mat,” in which she uses elements from Afro-Jamaican cosmology to display rich Diaspora traditions, as well as the dangers of forgetting them. In 1989, Brodber won the  Commonwealth Writers’ Prize, the Prince Clause Award in 2006, and the Musgrave Medal in 1999. She received an honorary D.Litt. degree from the University of the West Indies in 2011. Violet Mosse Brown of Duanvale, Trelawny in Jamaica, who, at the age of 117, was officially named the oldest person in the world by the Gerontology Research Group (GRG) on April 15, 2017. Born on March 10, 1900, Brown was the first Jamaican to be verified as a supercentenarian, a person who has lived to or passed their 110th birthday. Brown, known as “Aunt V;” has a son, Harold Fairweather, 96, who was believed to be the oldest person in the world who had a parent who was also living. Brown’s mother Elizabeth Riley lived to be 96. Brown and her husband were cane farmers who sold their crop to the Long Pond Sugar Estate. Her husband later became the caretaker of a neighboring cemetery, where he relied on his wife’s skill at keeping records to help him maintain the cemetery. Brown was thought to be the world’s last living Victorian.

Jamaican American Jasmine Stewart, 12, received the MasterChef Junior trophy and a grand prize of $100,000 on the Season 5 finale of the Fox  television series. Stewart was inspired by her parents and relied on her Jamaican roots to win the ultimate prize. On February 9, 2017, She turned in what was called a “remarkable” performance and progressed from “Top 40” to “Top 20” and then to “Top 12” before her elimination after a baking challenge. However, she won her way back into the competition and reached the “Top 6” after winning a “comeback challenge.”. To win a place in the finale, Stewart prepared a Mediterranean lamb chop with herb couscous, olive puree and pickled peppers. Celebrity chef Gordon Ramsay described the dish as “breath=taking” and the “best cooked protein ever in the competition.” Stewart’s white fish and scallop fritter appetizer served with green papaya and red pepper peanut sauce, served grilled spot prawns with a basil pesto and chili watermelon, and her jerk-seasoned lobster tail, coconut curry broth and vegetables solidified her reputation and put her in the lead. Stewart said  that a person should always “dream big” and always thought she deserved to win the title. Jamaican Novolene Williams-Mills was included among 23 athletes featured in the Body Issue of “ESPN The Magazine.” A four-time Olympic medal winner in track and field, Williams was the first breast cancer survivor to appear in the annual specialty publication. The Body Issue features nude and semi-nude photos of athletes and competes with the Swimsuit Issue of “Sports Illustrated.” Williams was born in St. Ann and graduated from Ferncourt High School in Claremont. She attended the University of Florida at Gainesville, graduating with a BA in 2004. While at the university, she belonged to the track and field team, the Florida Gators, coached by Tom Jones. Williams-Mills, 35, won the silver medal in 4×400 relay at the 2008, 2012, and 2016 Olympics; she took the bronze medal in the event at the 2004 Olympics. In addition to her Olympic victories, she received the gold medal at the 2015 World Champions in Beijing in the 4×400 relay and silver medals in the same event at the World Championship in 2011, 2009, 2007, and 2005. She won a bronze medal in the 400-meters at the Worlds in 2007. At the World Relays in Nassau in 2014 and 2015, Williams-Mills won silver medals in the 4×400 relay each year. Additionally, she took first-place gold at the Commonwealth Games in Glasgow in 2014 in the relay event, as well as a silver medal in the 400-meters. In 2006, she won a bronze medal in the 400 meters at the Commonwealth Games in Melbourne. Jamaican Dr. Lawrence Williams, adjunct professor in the College of Health Sciences at the University of Technology, and his co-researcher Dr. George Levy in the United States, successfully resolved 28 years of research on the indigenous guinea hen weed (Peteveria aalliacea) of Jamaica. Dr. Williams was granted a patent from the United States for discovering the anti-cancer activity in the plant. His discovery involved isolating dibenzyl trisulphide (DTS), the weed’s active ingredient. DTS, a polysulphide mitogen, has a broad spectrum of activity that includes anti-proliferation and/or anti-cyctoxic effects on human cancer cell lines. It also stimulates the production of stem cells from bone marrow and the thymus with few toxic effects. Dr. Williams came to the College of Health Sciences in 2016 and was involved in plant-based research at both the graduate and undergraduate levels since then. He received his doctorate at the University of the West Indies and did post-doctoral studies at the University of Hohenheim, Institute for Chemistry in Stuttgart, Germany. Dr. Williams has received numerous awards and fellowships for his research, including the 2013 Honored Member for Research, Continental Who’s Who, USA; 2011 Silver Musgrave Medal for Outstanding Merit in the Field of Science (Scientific Research) from the Institute of Jamaica; Induction into the International Biographical Centre (IBC), Hall of Fame, Cambridge, UK (2004), and many others. Currently, Dr. Williams supervises post-graduate research on the anti-inflammatory activity of curcumin and canabidial and undergraduate research on the insecticidal and anti-bacterial activity of Neem extracts. Ayanna James, Jamaican costume designer and fashion stylist, serves as the creative force behind the popular looks on the HBO hit television show “Insecure.”  James does her creations in a space where narrative and visuals come together and created what have been called “obsession-worthy” and “iconic” looks for the show. The “Niggas” sweatshirt is just one example. Going beyond costumes that look good, James’s designs display her talent at interpreting the emotions, experiences, and growth of the show’s characters through skillful selection and construction of their clothing. James was born in Jamaica and now lives on the West Coast. She attended Florida A&M University. She credits good timing with her move into fashion styling. And credits her first job with teaching her about styling. James sees her position on “Insecure” as a way to promote independent black-owned brands. Miss Jamaica Davina Bennett did not win the crown at the 2017 Miss Universe pageant, but she created a major stir on social media as fans applauded her decision to wear an afro hairstyle during the competition. Bennett, 23, was praised for embracing her natural hair, and her fans even started a Twitter hashtag “#MissJamaicaShouldHaveWon.” Bennett herself said on Instagram that although she did not win, “I got what I was seeking.” She previously stated that her chief motivation in becoming a Miss Universe contestant was to highlight deaf awareness and the foundation she started to aid the deaf. She expressed satisfaction at representing “my little island” and appreciated all the love she received from her fans and supporters. Bennett noted that she was the “first afro queen” to have attained such a high ranking in the pageant’s finals. Jamaica’s Solange Sinclair, 24, represented Jamaica at the 2017 Miss World Pageant in Sanya, China, and was included in the Top 10 finalists at the competition. Sinclair finished seventh at the Grand Coronation on November 18, 2017. She previously won the Miss Jamaica World pageant in September 2017 and holds the title of Miss World Caribbean Queen of Beauty. Contestants representing Jamaica have been included in the Top 10 at the Miss World pageant several times, with Sanetta Myrie, Miss Jamaica World of 2015 the contestant just before Sinclair to place in the Top 10. Myrie finished in fourth place. Jamaicans have won the Miss World crown three times. In 1963, Carol Joan Crawford received the title; in 1976, Cindy Breakspeake was crowned the winner; and in 1993, Lisa Hanna reached the top spot.